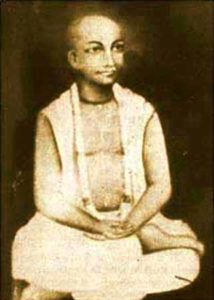 A brahmachari for his entire life, Narottama dasa visited all the places of pilgrimage. He was on the highest platform of devotional achievement.1

Narottama dasa Thakura appeared in the village of Kheturi, about twelve miles from Rampur Bowaliya in the Gopalpur subdivision of Rajshahi district. This took place on the full moon day of the month of Magh sometime around the middle of the 15th century of the Shaka era.

Narottama was born on the Maghi Purnima. From that day on he thrived and grew like the waxing moon.2

From his early childhood, Narottama began to display symptoms of his future greatness. Everyone was amazed to see his great intelligence and his devotional demeanor. He was constantly absorbed in meditation on the wonderful qualities of Sri Caitanya Mahaprabhu and Nityananda Prabhu. Mahaprabhu and his associates appeared to him in his dreams.

As tears poured from his eyes, Narottama would offer prayers of surrender to Sri Krishna Caitanya, Nityananda, Advaita and the other associates of the Lord. Finally, the Lord and his associates appeared to him in a dream and consoled him with kind words.3

Mahaprabhu Leaves Prema Behind for Narottama

According to the Prema-vilasa, when Mahaprabhu passed through Kanair Natashala, as he was dancing ecstatically in kirtana, he began to call out the name Narottama. When Nityananda asked him why he was calling out this name, Mahaprabhu answered, “My Lord. You do not know your own glories. When we went to Jagannatha Puri, you shed tears out of divine love, day after day. I managed to capture your divine love and save it. Now I wish to keep it here by the Padmavati River for Narottama dasa.”

Mahaprabhu then went on to the Padmavati River to the place known as Kutubpur, where he bathed and sang and danced in ecstasy. He then called out to the river, “O Padmavati! Take my love and keep it here. When Narottama comes and bathes here, give it to him.”

The Padmavati inquired, “How will I recognize him?”

Mahaprabhu answered, “You will know it is Narottama, for when he enters your waters, you will overflow.”

The place where Mahaprabhu placed prema for Narottama’s sake was later given the name Prematali. When Narottama was twelve years old, he had a dream in which Nityananda Prabhu told him to bathe in the Padmavati and take the prema which had been stored there for him. He went the next day to the Padma and as soon as he put his foot in the water, the river started to overflow. The Padmavati then remembered Mahaprabhu’s words and gave Narottama the prema which she had been safeguarding for him.

As soon as he experienced the ecstasies of prema, Narottama’s character, his appearance, everything about him changed. His parents noticed the transformation and did everything they could to bring him back to his normal state, but failed. Having drunk the wine of divine ecstasy, Narottama had become intoxicated and the bonds of family life could no longer hold him back.

Narottama began to wonder how he could escape from his material entanglements. Finally, one day when his father and uncle were away on official business, he practiced some deception on his mother and tricked his bodyguards so that he could leave his family for Vrindavana. It was the full-moon day of Kartika when this event took place.

According to others, Narottama waited to go to Vrindavan until after the death of his father when his cousin Santosha was given the responsibility for the zamindari. Even though he was the son of a rich zamindar, in his desire to unite with the Lord, he was ready to abandon the pleasures of the body in a moment. Day and night, he cried, walking barefoot, forgetting to eat and to drink until finally he would fall unconscious under a tree. One golden-skinned Brahmin came and offered him a cup of milk and said to him in a sweet voice, “O Narottama, drink this milk. Your cuts and bruises will go away. Take it easy.”

After saying this, the Brahmin vanished and the exhausted Narottama finally fell asleep. That night, he dreamt of Rupa and Sanatan Goswami. The two Goswamis placed their hands on his chest and fed him the milk that Mahaprabhu himself had brought him. All of Narottama’s fatigue disappeared.

Narottama is Initiated by Lokanatha Goswami

The Prema-vilasa also describes how Narottama took initiation from Lokanatha Goswami. Narottama was born on Maghi purnima, his renunciation took place on the Kartika purnima, and he was initiated by Lokanatha on the Shravan purnima.

Lokanatha Goswami is considered to be a personal associate of Sri Chaitanya Mahaprabhu. Indeed, he was the first Gaudiya Vaishnava to be instructed by the Lord to go to Vrindavana, along with Bhugarbha Goswami. Lokanatha set the standard for worship in a spirit of renunciation while in the dhama. He was a viviktanandi Vaishnava, i.e., he took pleasure in worshiping the Lord in solitude. In this spirit, he had vowed not to take any disciples. Narottama dasa too made a vow: to take initiation from no one other than Lokanatha. Though he was the son of a raja, Narottama’s desire to receive Lokanatha’s mercy was so great that he went in the middle of every night to clean the place he used as a toilet. He would also leave fine earth and water for him to clean himself afterward. This is described as follows in the Prema-vilasa:

He went to the place where the Goswami performed his bodily functions and did a special job of cleaning it. He sifted the earth to make fine, clean earth with which Lokanatha could clean his hands. He did this as a regular service. He would hide the broom of coconut leaves in the earth and each night take them out to sweep the place, his heart filled with joy. He considered himself fortunate and his body worthwhile. He would hold the broom to his chest, repeating, “This is the power that will help me attain my Lord’s lotus feet.” As he said these words, he cried and torrents of tears washed over his chest.

Lokanatha was astonished to see that the place was daily being kept clean. He became curious to find out who it was and so, one evening, he went and hid in the jungle, chanting japa the entire night in wait for the anonymous benefactor. At midnight, he saw someone engaged in cleaning the place and asked him who he was. When he found out that Narottama, the son of a raja, was doing such a filthy task, he felt embarrassed and told him to desist. Narottama, however, immediately fell at Lokanatha’s feet began to cry. When Lokanatha saw Narottama’s humility and pain, his resolve softened and gave him initiation. Thus Narottama gave an outstanding example to the world of how one should behave in the service of one’s spiritual master.

At that moment, Narottama went there and with great enthusiasm, engaged in the necessary service to his guru. Lokanatha was pleased with his service and initiated him in the mantra, demonstrating the greatest mercy on Narottama.4

Without caring for his youth or his physical beauty, he left home on the full moon day of the month of Kartika. After wandering through many pilgrimage places, he finally came to Vrindavan where he became Lokanatha Goswami’s disciple. On the auspicious day of Shravani purnima, Lokanatha initiated Narottama.