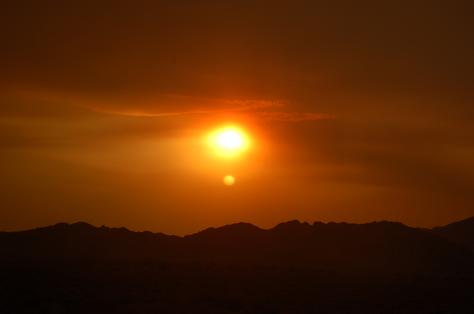 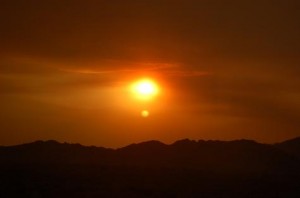 In the auspicious invocation to his treatise, Sri Caitanya-caritamrta, Sri Krishna dasa Kaviraja Goswami offers two pranam verses. Sri Krishna dasa tells us that the second of these verses is specific (visesa), indicating that in it the presiding deity of the book is named and described. This stanza runs as follows:

Kaviraja Goswami offers his respect (vande) to Sri Krishna Caitanya. Sri Krishna means Radha Krishna, who have appeared as Caitanya. He is Krishna Caitanya, or Krishna conscious. This name was given to him by Kesava Bharati Maharaja as Mahaprabhu began his preaching lila. The word ‘caitanya‘ means consciousness. Mahaprabhu is always conscious of Krishna. ‘Caitanya‘ also means ‘soul.’ Mahaprabhu is the soul of Krishna, Srimati Radharani, and thus he is conscious of Krishna as only she can be. Krishnadasa Kaviraja Goswami wants to say all of these things. He wants us to know from this verse that Caitanya Mahaprabhu is Sri (Radha) and Krishna combined.

Sri Radha saw Gauranga in her dream once, a golden dancing figure in a land non-different from her own Vrindavan. His dancing and chanting made the entire universe cry. When she awoke, she wondered who this figure was. Was he Krishna, or was he her own self in another form? When Krishna arrived and heard her speaking about this he merely laughed. However, his kaustaba mani (gem) that he wears over his heart and which represents all jivas suddenly shone brightly, revealing to Radha the reason why Krishna only laughed.

She understood from the joy of the jivas resulting from thinking of that golden figure that he was both Krishna and herself in one figure. She told Krishna, “You, Gopala, are that figure,” ‘tat tvam asi,’ and in that figure, “I am also you, Gopal,” ‘aham gopalo.’ This is the truth of the Upanishads.

Then Krishnadasa Kaviraja Goswami says ‘nityananda sahoditau.’ The word “sahoditau” refers to both the figurative, simultaneous rising of the sun and moon referred to in the third line of this verse, as well as to the oneness of Gaura and Nityananda. These two are one. “Saha” means ‘together with,’ and suggests action in common. Krishna Caitanya appears together with Nityananda Prabhu, his other self, who knows nothing other than the service of Gauranga.

“Udita” means ‘rising high,’ ‘exalted.’ Nityananda causes the name and person of Sri Krishna Caitanya to rise high on the spiritual horizon through his part in the conversion of Jagai and Madhai and other preaching exploits, and Krishna Caitanya made clear to all of his devotees the exalted position of Nitai, lest he be misunderstood owing to his unorthodox behavior.

They appeared together on gaudadaye, the eastern horizon of Gauda. “Gauda” means sweet. Gaudadesha is the sweet country that is non-different from Vrindavan, the land of sweetness, madhurya. As the sun and moon rise in the east, “udaye” implies this direction. East is the spiritual direction, to which we shall turn to uncover the secret treasure of our spiritual inheritance. Light arises in the east, the direction of the gods.

The madhurya human-like sweetness of Krishna in his aprakrta lila looks ordinary and mundane (prakrta), but it is Godly to the extreme (aprakrta).

Gauda represents his sweetness, and udaya the eastern direction, that of his aisvarya. When he who is all majestic appears as if ordinary, this is truly sweet. When the two sweet Gods, Krishna and Balarama, appear as Krishna Caitanya and Prabhu Nityananda there is something more added to their sweetness.

On the eastern horizon of the land of madhurya they appeared like the sun and moon, as if these two luminary orbs had simultaneously arisen. Kaviraja Goswami describes this as “citrau,” brilliant and wonderful. This wonder (camatkara) is the basis of the aesthetic rapture (rasa) that they came to bestow wonderfully and with brilliance like that of the simultaneous rising of the sun and moon.

The word “puspavantau” indicates the sun and moon. Puspa implies nourishment. These two Gods nourish our soul sweetly, as the sun produces rain to nourish the crops and the moon is said to make them succulent. Visvambhara sustains the universe with bhakti and the ever-happy Nitai makes the world joyful by giving everyone Gauranga. This rising from madhurya on the eastern horizon is the compassionate, magnanimous heart of the Godhead that stands so exalted in our mind.

Kaviraja Goswami says “sam-dau,” indicating that the appearance of Gaura Nityananda is madhurya with the addition of audarya (generosity). Sama is the son of Dharma. Sama indicates the absence of sexual passion and the peacefulness that follows this absence. Gaura Nityananda bestow (dau) this soothing sama, giving rise to the ananda of the soul, and more, the prema-dharma of Vraja-bhakti.

To further stress this point and make clear what the farthest reach of this benediction of Gaura Nityananda is, Kaviraja Goswami says “tamo-nudau.” Gaura Nityananda take away the darkness of ignorance. What is this ignorance? Kaviraja Goswami says “ajnana-tamera nama kahiye kaitava.” It is known as kaitava, and it appears in four forms: “dharma artha kama moksa vancha adi sab.”

The desires for piety, economic development, sense indulgence, and liberation from all of these is kaitava, cheating. Desire for these four goals of life are the darkness (tamo) of ignorance, especially the desire for moksa, which ignores one’s innate nature as a servant of God.

This nama-sankirtana taught by Gaura Nityananda dissipates the darkness of the heart (ceto darpana marjanam) and brings us to nistha-bhakti in the service of two bhagavatas, the book bhagavata and those who embody its message (nasta prayesu abhadresu nityam bhagavata sevaya).

Serving these two is the door to bhakti-rasa (dui bhagavata dvara diya bhakti rasa). The nature of this bhakti-rasa is that having removed all ignorance from the heart it imprisons Krishna therein.

Should I Stay or Should I Go? →

An Invitation to All, Heard Only by a Few →