Q and A with Hari-kirtana das 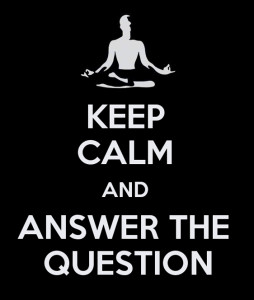 Last September I had the pleasure of meeting Jesse Bryant, a committed Christian who was taking a course, offered by an international Christian ministry, about constructively engaging with people whose worldview differed from one’s own. The course placed particular emphasis on the importance of gentleness and respect as essential elements of constructive discourse (non-violent communication). Recording and transcribing a collection of such engagements was part of the course and, as our casual conversation about the relationship between yoga and religion evolved, Jesse asked me if I would participate in an interview for his course. I happily consented. His questions echoed the kind of questions I often field in workshops and Yoga Teacher Training sessions. What follows is an edited excerpt from his interview.

Jesse Bryant: What are the roots of yoga? Does the whole “yoga thing” come out of the Hindu culture?

Hati-kirtana das: The scriptures that form the basis of what we now know as ‘Hinduism’ are called the Vedas but the word ‘Hindu’ does not appear anywhere in the Vedas. ‘Hindu’ is an Anglicized version of a Persian word that describes the people who live on the other side of the Indus River: it originates as a geographical description of people who followed the Vedas and practiced what they themselves called ‘Sanatana Dharma’ or ‘the Eternal Occupation of the Living Being.’ Followers of the Vedas never referred to themselves as Hindus until around the 1500s, when they had to make practical distinctions between themselves, Muslims and, later, European colonials. It is only very recently that ‘Hindu’ has become a word associated with an ethnic, nationalistic or religious designation.

So now, to directly answer your question: yoga has its roots in the Vedas. Patanjali’s Yoga Sutras or ‘Codes of Yoga’ come from a tradition that springs from the Vedas. So you can say that yoga, like Hinduism, has its origins in Vedic culture but it isn’t accurate to say that yoga comes from Hinduism.

JB: The following questions are the four primary questions that make up the guidelines for the interview. The first one deals with origins: What is the origin of the world, life, and man?

JB: Question number two is about meaning: What does life really mean?

Hkd: In the Yoga Sutras, Patanjali proposes that the reason for the world is to either facilitate our inquiry into our own existence and to travel the path of self-realization or to facilitate the deepening of our illusion. It’s up to us to choose, assuming that we’re even able to make a conscious choice: for most people, the question never arises.1

Keep in mind that in the context from which I’m speaking, you and I and every other living being are eternal. We never come into existence and we never go out of existence. Therefore, the appearance of coming into existence, being here for some time and then going out of existence is illusory. We identify with the body and think that whatever happens to the body happens to us, so we think ‘when my body is born I come into being and when my body dies I go out of being’. Or we think that we come into being and then go somewhere after the body is gone. But in yoga philosophy we have always been and we will always be, therefore it’s not a one shot deal. We come back as many times as it takes to learn who we really are and what we’re supposed to be doing.

JB: Destiny: What happens to a person when he or she dies?

Hkd: That depends because we create our own destiny by our actions. The law of karma is that you do something, there’s a reaction to your action, and that reaction is your future destiny. How we respond to our destiny creates our next future destiny, and on and on it goes. So we’re constantly in the act of creating our destiny. In yoga philosophy, heaven is a celestial place where you have your desires fulfilled in terms of your material senses and you enjoy at a much higher level and for a much longer time than you can at the terrestrial level but it’s temporary. And hell is a suffering condition of life that’s also temporary, it’s not eternal damnation; you eventually get another shot at a human form of life. So karma is sensitivity training in order to develop that curiosity to ask, “Why is happiness temporary? Why am I suffering? Why am I here? What am I doing wrong? What should I be doing?” Then, if one aspires to realize one’s true eternal spiritual nature, well that’s stepping out of the system altogether, so it’s going beyond heaven and hell.

JB: Now, in regard to karma, is everything that happens to you like a byproduct of that, or does some stuff just happen? If you have an accident or what have you, is that always karma?

Hkd: There are no accidents. There is always karma. Whatever happens to us, we get to take responsibility for it. It’s not a ‘blame the victim’ philosophy; it’s a ‘take responsibility’ philosophy. Karma reconciles both destiny and free will. It’s not like having a fate that’s been written for us by someone else; when we take responsibility we’re able to respond to our destiny as opposed to thinking ourselves victims of some fate that we had no hand in creating or opportunity to influence.

In theistic yoga there is one exception to karmic destiny: divine intervention. We can request divine intervention and that can change our karma. A destiny we’ve already created can’t be changed by our own endeavor but the personal aspect of the Supreme Being can change it. So if we use our free will to ask God to give us shelter and guide us back to him, as in the mantra sri krsna saranam vraja, the reciprocation may result in a change in and ultimately end to our karma.

JB: Alright, well, it’s been helpful and I learned a lot of things I didn’t know before.

Hkd: My pleasure. Thank you very much.