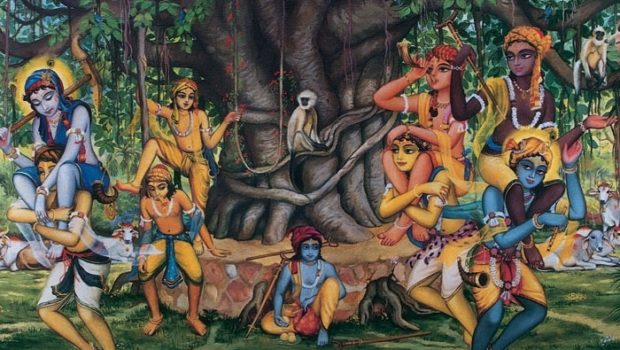 There Is Only Love 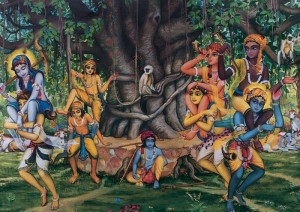 Recently, I was chatting with a friend about our experiences of honoring the free flow of faith and following our hearts in divine matters. He expressed to me that one institution routinely responds to “defectors” with the statement, “We’ve never lost a sincere devotee.” In a joking retort I replied, “Then welcome to the losers’ club! Enjoy your transcendental journey.” He quickly quipped, “Krishna climbs on the shoulders of the losers.” Yes, he certainly does! My friend is referring to the gopa friends, who are fully steeped in loving service. After playing a game and losing to their beloved friends, Krishna and Balarama will climb upon their shoulders as victorious winners. When the situation is reversed, Krishna and Balarama will offer their shoulders in defeat. The loving dynamic brings great pleasure to all the Vrajavasis.

This exchange with a dear godbrother got me thinking more broadly and practically as to how our lineage is filled with acaryas who follow their faith, and who, with conviction, forge their own course. Despite institutional resistance and controversy, their expression of faith fosters a dynamism that preserves the integrity of Gaudiya Vaishnavism. This brings pleasure to the predecessor acaryas. Moving under the influence of faith is how we genuinely follow in the footsteps of our sampradaya acarya, Sri Caitanya Mahaprabhu, who challenged the status quo of the time as exemplified by the smarta brahman caste system, in order to offer the highest conception and experience of love of God.

In this same spirit, Srila Prabhupada forged ahead with a new mission, just as Srila Bhaktisiddhanta Sarasvati Thakur had done in his own time. Srila Bhaktivinode fathered the age of modern Hinduism by presenting the tradition in a manner that appealed to both the intellectual elite of the time as well as the common masses. Srila BR Sridhara Swami stayed in remote Navadvipa to give  elucidations on Srimad Bhagavatam so timeless and profound as to remain relevant and appreciated by generations of Vaisnavas.

It may appear that these acaryas were doing very different things. In some cases, they were even accused of deviation by their contemporaries. But fundamentally—and most significantly—they actually did the same thing: the dynamic work of the acarya. An acarya is generally defined as a prominent teacher in a lineage, but he or she must also be an innovator. Although it is a qualified position requiring dedication and deep realization (srotriyam brahma-nistham), it is often misunderstood and many times an acarya‘s actions are a catalyst for controversy. Nevertheless, the position is essential to the vitality of a lineage and such qualification must be acknowledged among present day sad-gurus as well.

Srila Prabhupada often described the Krishna Consciousness Movement as “revolutionary.” Indeed, the word “movement” connotes such.  A mission’s vibrancy is demonstrated by  sometimes syncopated movement, yet the mission must also be permitted to flow with the steady back-beat of the mrdanga. It is those expressions of the deepest realized souls who follow in spirit and essence that bring pleasure and dignity to our illustrious lineage.

When we follow such acaryas, we also become qualified to discern between principle and detail. When we pay close attention and follow our faith informed by sastra, we will understand and implement those essential principles of bhakti. We will avoid offenses to sadhus. We will avoid the devastating effects of eclipsing genuine spirituality with institutionalism.

All these matters are reconciled in loving service. Those who genuinely follow their teachers and  inspiration with firm faith are never “losers” or ever at a loss. It becomes clear in an ultimate sense when examining how Krishna’s lila manifests joy in pure love regardless of how it may appear to us. That is the nature of spirit.

Follow your heart with informed faith and conviction, for that will yield a genuine result. It will be progressive. Understanding guru parampara is just that. It involves plugging into the subjective reality of the heart and entering  the current of mercy, such that one may also become a lover. That’s the thing about matters of spirit there are no winners or losers—only lovers.