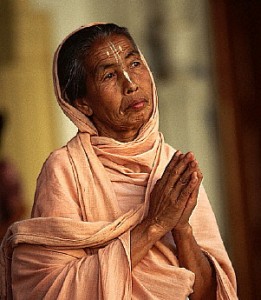 A common complaint that is voiced in the modern world is that religions are structures by which a privileged group subjugates those who are in some way different. In this brief article we see that true spiritual experience in general, and the Gaudiya Vaishnava experience in particular, moves in a very different direction.

According to the varnasrama system, generally the sudras (laboring class) and ladies are not allowed direct participation in the higher religious functions. Only indirect participation is allowed for them, and they also do not get the sacred thread. Yet a brahmana boy can be found touching the feet of his mother!

The mother will not touch the deity of Narayana, but her son who is worshiping Narayana is touching her feet and taking her feet dust. Such a position is there in the varnasrama system. Women are generally considered unfit or below the standard of engaging in direct service to the Lord, but in the Vaishnava conception there is no such strictness about that.

In my youth some sort of disregard grew in my mind about the lady section: “I must keep far away from them; they are untouchable.” But that notion was amended by my aunt in this way: she noted my nature, my conduct, and once affectionately remarked to me, “Oh, don’t you know that ladies represent Laksmidevi? They belong to the same section, and in them the qualities of sacrifice and submission are very clearly visible, so they should be respected. They should be respected, and the aggressive male nature is to be viewed unfavorably. The feminine ego-conception is an ideal of a very noble type wherein sacrifice, the devotional aspect, is very prominent. Ladies are not aggressors; they are sacrifice personified. Whereas the male nature – that is aggressive.”

Gradually that idea came to me and I learned to appreciate Sita, Draupadi, and so many others, especially the supreme example shown by the gopis. The standard established by the has shown that self-forgetfulness, self-sacrifice, and self-surrender reaches its zenith, its highest conception, in the lady aspect. The passive aspect holds the highest position: that viewpoint came gradually and caused a turnabout within my mind.

Madhura rasa, consorthood, is the highest position, and within Srimati Radharani we find the greatest degree of sacrifice and affection. The males are the aggressors; they are responsible for all the difficulties and troubles, not the ladies. That we possess the aggressive nature of a male is the disease in us. Gradually that perception developed from inside, and ultimately I found that when the female nature is pure and in connection with the supreme of vatsalya rasa and madhura rasa, it holds the highest position in the topmost realm. And our aspiration is for engagement in the service of Srimati Radharani.

The position of Sri Radha is that of the highest service to Krishna, and Radha dasyam has been considered by Mahaprabhu to be the highest attainment. Vasudeva Ghosa says:

Who could disclose this holy, divine fact if Sri Gauranga did not personally appear on this Earth? Who could let us know, who could inform us that the highest servitor is Radharani? But Gauranga did come, and he clearly showed that the highest conception of service is to be engaged in the service of that highest, negative potency.