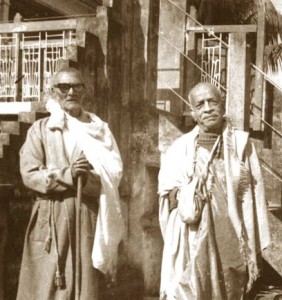 From Swami B. B. Visnu’s Our Affectionate Guardians.

The period directly following Srila A. C. Bhaktivedanta Swami Prabhupada’s passing was pivotal in determining how the international Gaudiya Vaishnava community would continue and grow. Within this period, one of the most essential factors was the way in which Prabhupada’s students and organization interacted with Srila B. R. Sridhara Deva Goswami, Prabhupada’s dear godbrother, whom Prabhupada had advised his students to approach for guidance. Unfortunately, this history has remained largely unknown to many, primarily as a result of the conscious desire of a few to keep it that way. Both those who were present at the time and those that came later have often been given insufficient and inaccurate information. Thus rumors and unfounded emotions have thrived, while truth has remained elusive to the larger portion of the Gaudiya community.

Srila A. C. Bhaktivedanta Swami Prabhupada and Srila Bhakti Raksaka Sridhara Deva Goswami first met in 1930 in Allahabad, India. Many times they worked very closely in establishing the preaching of the Gaudiya Matha, particularly in Allahabad, Bombay, and Calcutta. During the years of internal strife in the Gaudiya Matha, Srila Prabhupada and Srila Sridhara Maharaja lived together for more than five years in Calcutta. In the Srila Prabhupada-lilamrta, Satsvarupa das Goswami writes of Srila Sridhara Maharaja’s subletting several rooms from Srila Prabhupada’s apartment on Sita Kanta Banerjee Lane:

Here Abhay [Srila Prabhupada’s name before initiation] and Sridhara Maharaja and his followers could remain aloof from the warring factions [of the Gaudiya Matha] and together pursue their plans for spreading Krishna consciousness.1

We are very fortunate to hear His Divine Grace Om Visnupada Paramahamsa Parivrajakacarya Bhakti Raksaka Sridhara Maharaja. By age and by experience, in both ways, he is senior to me. I was fortunate to have his association since a very long time, perhaps in 1930.

Maharaja, I think you remember the incident when you went to Allahabad? On that auspicious occasion, we were connected. There is a long story, it will take time, but I had the opportunity of associating with Sridhara Maharaja for several years. Krishna and Prabhupada [Srila Bhaktisiddhanta Sarasvati Thakura] liked him to prepare me. Sridhara Maharaja lived in my house for many years, so naturally we had very intimate talks and he was my good advisor. I took his advice and instructions very seriously, because from the very beginning I knew he was a pure Vaishnava, a pure devotee, and I wanted to associate with him, and I tried to help him also. Our relationship is very intimate.2

Herein, we find the history of a transcendental relationship between these two pure devotees.. They intimately associated and discussed Srimad-Bhagavatam for more than five years, often for five to seven hours a day. While remembering their intimate talks, specifically in regard to Bhagavad-gita, Srila Sridhara Maharaja recalled the depth of their conversations:

Once while discussing the verse dadami buddhi yogam tam yena mam upayanti te (Bg. 10.10), I submitted to him that here, upayanti is indicative of parakiya-rasa (paramour relationship). On this point he agreed with me, saying, “Yes, at this point there cannot be anything but the parakiya-rasa of Vraja. The conclusion of Bhagavad-gita must come to this.”

Please Look After Them

Their many confidential talks reveal the depth of their relationship. In March 1982, Srila Sridhara Maharaja said,

When he [Srila Prabhupada] began his translation of the Bhagavad-gita, it was in consultation with me in a very deep way. Later, he requested me many a time, “Please look after them; I am taking them this side [to Krishna consciousness]. You have a responsibility to look after them.”

Srila Prabhupada would often consult with Srila Sridhara Maharaja regarding the spiritual significance of his failing business and family relationships. Srila Sridhara Maharaja confirmed Srila Prabhupada’s suspicion that Krishna’s special mercy was being shown to him by taking away all his material possessions as per Srimad-Bhagavatam‘s verse, yasyaham anugrhnami (10.88.8).

An example of Prabhupada’s helping with Sridhara Maharaja’s preaching work is seen in his financing Prapanna-jivanamrta: Life-Nectar of the Surrendered Souls.3 This book, the most important work of his life, shows Sridhara Maharaja’s exceptional brilliance in extracting the essence of the scriptures. Prapanna-jivanamrta was also greatly favored by Niskincana Krsnadasa Babaji Maharaja and was the only book he carried with him.

Abhay would often accompany Sridhara Maharaja and his assistants at preaching programs, where he would play the mrdanga. And when Sridhara Maharaja fell ill, Abhay led the other devotees on preaching engagements, performing kirtana, playing mrdanga, and giving lectures on the Bhagavatam.5

While in Bombay, Prabhupada and Sridhara Maharaja were the receiving party for a Gaudiya Matha sannyasi who was returning from Europe. They were dismayed by his changed appearance. He was missing the tridanda of a Gaudiya sannyasi, the sikha of a Vaishnava, as well as the traditional robes, but they still eagerly inquired about the preaching field in the West. The sannyasi remarked, “They ask questions that cannot be answered.” Prabhupada inquired further as to the nature of those questions, and one after another Sridhara Maharaja answered them all. At that time Prabhupada boldly declared, “Today, Europe has been defeated by Asia!”

An example of Srila Prabhupada’s trust of Srila Sridhara Maharaja is found in his letter of January 30, 1970 to Satsvarupa Goswami, then editor of Back to Godhead magazine:

Regarding Sridhara Swami’s article: I do not know what sort of article it is, but whatever it may be, the writer’s name should be Swami B. R. Sridhara. Besides that, there is no need of giving any short introductory note at the present moment. If we publish an article, it is to be understood that the version of the article is not different from ours.

In other words, even without seeing Srila Sridhara Maharaja’s article, he understood that it was philosophically sound and in agreement with his mood of presentation. Additionally, in a 1973 BBT meeting in Los Angeles, Srila Prabhupada stated that only himself and Srila Sridhara Maharaja were qualified to give commentary on the Srimad-Bhagavatam. This is confirmed in Giriraja Maharaja’s letter of September 16, 1978 to the GBC:

What I Came to Say, Will Remain

Upon meeting Srila Sridhara Maharaja, a young gentleman of high brahminical lineage who was noted for his Vedic scholarship, Srila Bhaktisiddhanta Sarasvati Thakura remarked, “If persons of your caliber join us, then certainly our mission will be successful.” Srila Bhaktisiddhanta Saraswati Thakura greatly appreciated Sridhara Maharaja’s writings and was once so pleased with a poem that Sridhara Maharaja wrote about Bhaktivinoda Thakura that he remarked to his sannyasa disciples Bhakti Yadav Goswami and Sravati Maharaja:

Bhaktivinoda Thakura himself has written this through him. Now I am satisfied that after me what I came to say, that will stay, that will remain; I find in these slokas the siddhanta.

If you include articles written by Sridhara Maharaja, the quality of your publications will be greatly improved.

Confirming Sridhara Maharaja’s profound erudition in the sastras, Srila Bhaktisiddhanta Sarasvati Thakura once directed that his name be suffixed with the title “Sastra-nipuna” (one who has very deep knowledge of the scriptures—a scriptural genius).

Srila Sridhara Maharaja composed many original Sanskrit works. Among them is the “Prabhupada-padma stavaka”, glorifying Srila Bhaktisiddhanta Saraswati Thakura. Srila Prabhupada requested that this song be sung daily in all his temples. Also composed by Srila Sridhara Maharaja is the sublimely beautiful “Prema-dhama deva stotram”, which presents Sri Caitanya Mahaprabhu’s lila and precepts. Akincana Krsnadasa Babaji Maharaja said that within this offering he found the presence of Srila Rupa Goswami Prabhupada, the leader of our sampradaya.

I explained and they were satisfied. Prabhupada’s discourses were very deep. The general public could not understand them. It was deep philosophy, so I was requested to repeat his message by the elevated servants of our Guru Maharaja. I could repeat this at least to their satisfaction. Madhusudana Maharaja and others were always of a very skeptical nature, not prepared to rely on anyone else. But they also said that when they listened to me it was as if they are hearing Prabhupada. So, my type is very akin to that of my Guru Maharaja. By his grace. Many persons have told us this.

Srila Sridhara Maharaja advised the leaders of the Gaudiya Sangha to confer the title “Bhaktivedanta” upon the then Abhay Caranaravinda dasa.6 This was after Srila Prabhupada had been given the title “Bhaktisiddhanta dasa” by another godbrother, Bhakti Saranga Goswami Maharaja. Srila Sridhara Maharaja adjusted Prabhupada’s name in response to suggestions from the Vaishnava community that the guru’s name should not be given to the disciple.

When Srila Prabhupada returned to India in October 1967, after his successful preaching campaign in America, he stayed with Srila Sridhara Maharaja in Navadvipa and observed his Vyasa-puja celebration. At that time, Prabhupada wrote a letter to Satsvarupa Goswami saying:

Yesterday, we have all come to Navadvipa-dhama. This place is an establishment of one of my godbrothers. It is a very nice and extensive place, and my godbrother B. R. Sridhara Maharaja has spared one entire house for our stay. He has also agreed to cooperate with our society. We shall observe his birthday celebration, and the brahmacaris shall learn how to celebrate the spiritual master’s birthday.7

Later, on July 7, 1975, Srila Prabhupada referred to Srila Sridhara Maharaja’s statement in a letter to his godbrother Bon Maharaja:

Sripada Sridhara Maharaja also appreciated my service. He said that Caitanya Mahaprabhu’s prediction: prthivite ache yata nagaradi grama, sarvatra pracara haibe mora nama, would remain a dream only, but he congratulated me that I have done it practically. I do not know how things are going on automatically except by His Divine Grace Srila Prabhupada (Bhaktisiddhanta), because I have no other assets except his causeless mercy.

During the Vyasa-puja celebration, Acyutananda Swami saw Prabhupada and Sridhara Maharaja fully absorbed in a deep discussion in Bengali. Upon inquiry about the nature of their talk, Prabhupada replied, “If I were to tell you, you would faint. Sridhara Maharaja has very high realizations.”10

5 Responses to Our Affectionate Guardians