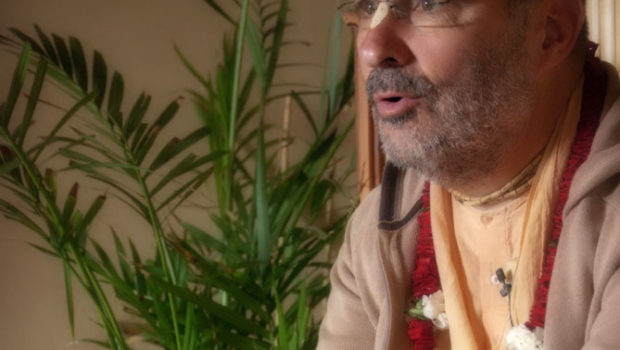 The Possible Messiness of Vapu 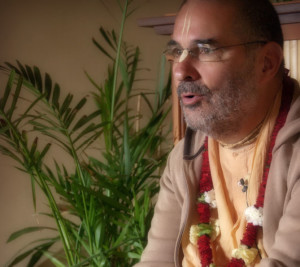 Most devotees, at some point in their spiritual journey, grapple with understanding their relationship with their guru. Vapu—interacting with the guru personally—is a rare and precious opportunity. It also may present more challenges than a vani relationship—serving the guru in separation. This has been my own experience. Having joined Srila Prabhupada’s mission in 1976, there was no scope for having a personal relationship with him. I found him present in his disciples, his teachings and my service of distributing his teachings to others.

At a certain point in my spiritual evolution, I felt a need for a siksa guru. In Vrndavana in 2001, I prayed to my favorite Radharani murti at Iskcon’s Krsna-Balaram Mandir to please help me go deeper in my spiritual practices. Soon after returning from Vrndavana, Swami Tripurari appeared in our inbox via his Sangha newsletter. After that, he began appearing in our mailbox in a square little white envelope with CDs. I have my husband to thank for these treasures.

At first my heart was skeptical. Although Swami Tripurari had been an impeccable sannyasi who Prabhupada dubbed “the incarnation of book distribution,” he had separated from Prabhupada’s movement. At the time, I didn’t know much more than this. My husband, Karnamrita, was undaunted by my reservations. His strong conviction to come closer to Swami won out.

Karnamrta asked if he could invite Swami to our home. I readily agreed, but seriously doubted that Swami would come. The next thing I knew we bought plane tickets for Swami, Citta Hari and Vrndaranya to come from Audarya to our home in Baltimore, Maryland.

Our first meeting was life changing. Without feeling restless or bored, we stayed up past midnight listening to Swami speak about the Brahma-vimohana-lila. Swami, an expert story teller, would weave strands of philosophical insights throughout his talk, satisfying both my heart and intellect. The following night, he continued to speak on the same chapter again arresting my mind in Krsna’s sweetness.

We took long walks in a nearby park getting to know more about this special person who had appeared in our life. He was unassuming and comfortable to be with. I unabashedly asked about his past—his family of origin, how he became a devotee and what prompted him to leave Iskcon. He candidly shared his life experiences as we walked the path in the cooling shade of the forest trees.

The visit was beyond any expectations I had. I felt nourished and happy. I felt Radharani was showering us with mercy through this divine meeting. When we took the little band of Vaishnavas to the airport, I felt my heart was breaking from the impending separation. Swami promised he would return soon and that gave me hope that our relationship would continue.

Swami came for three more visits in the span of a year. When we moved to North Carolina in 2004, he continued to visit our home. Then interest in hearing from him spread throughout this Southern Baptist state. Despite efforts of some devotees to dissuade others from hearing from him, many devotees came to hear and they too, became affected by the depth of his talks and realizations. When Swami was scheduled to come to our home we’d be excited. For weeks, I would bake and freeze quiches and cakes and meditate on how to improve the visits for the devotees attending. Serving the Vaisnavas who appeared on our door step during Swami’s visits was quite absorbing and always very rewarding. Then a shift in my relationship with Swami, which up until this point had soared unimpeded, happened. At one point in the course of Swami’s visits, I felt he was neglecting me. He went for walks without inviting me and didn’t spend as much time talking with me as on previous visits.

My intellect wrestled with my feelings of wanting special recognition and attention and at the same time not wanting to burden Swami with my neediness and unreasonable expectations. Many times in counseling devotees over the years, devotees shared a similar struggle in their relationship with their guru. I would share my intellectual perspective. The guru is not your father or counselor and the expectations we feel are unrealistic, even unfair, to place on our guru. Now my standard rhetoric did nothing to lift my burden of deep sadness and hurt. I felt guilty for my negative feelings toward my spiritual guide.

I fervently prayed for help from our Deities, Radha-Gopinatha. “Please help me work through these feelings that threaten my precious relationship with Swami.” While my prayers and emotional struggles continued, I pulled back from my relationship with Swami. I continued to listen to his talks and render service to the devotees in the sangha, but now I carefully guarded my heart. I concluded that keeping an emotional distance would protect me from disappointment and negativity in the future.

On his next visit Radha-Gopinatha answered my prayers in a most astonishing ways. We were at Gopal Nandini and Krishna Chaitanya’s house for a Govardhana-puja celebration. At this point, my negative emotions had mostly dissipated. I was content to just be present for Swami’s life-giving talks. I had put aside any expectations of external validation or recognition. I felt peaceful about having arrived at this internal state of wellbeing.

Then I was showered with grace that helped me realize—feel, not intellectualize—the real nature of my relationship with my guru.

As Swami was speaking, I was transported from the room into another plane. His words were more than words. I wasn’t simply hearing them; I was living them. They were alive in me; I felt them and tasted them. I knew my destination was brought on by Swami’s speaking. I saw another dimension to his speaking—to the reality that his bhakti-infused heart was touching my heart and was capable of taking me to the spiritual world.

The awareness of those unforeseen moments is beyond any transcendent experience I’d had. I felt overwhelming gratitude for being allowed to see the truth of what actually transpires between guru and disciple. Though I tried to hold back tears, they pushed through my closed eyes. Wiping my eyes with the edge of my sari I now looked at Swami through different eyes. He was beautiful and effulgent. I had never seen his form in this way. Sitting in front of me was a transcendental being connecting me to a plane of existence that I would have no access to without his mercy and grace.

I left the program feeling a deep connection with my spiritual guide. I knew the experience left an indelible impression. I realized how navigating the personal relationship with the guru is tricky especially with our western conditioning. It seems common that we project our ideal image of what we think a guru is supposed to be onto our spiritual guide. Since our ideal is often contaminated with our material expectations of relationships, we set ourselves up for disappointment and we miss out on what the actual relationship offers. We may eventually reject the very relationship that Krsna has personally sent to us. Thus we become robbed of our greatest prospect in our life.

The guru connects us to the spiritual world first through teaching us the sambandha jnana (knowledge of our relationship to the absolute truth) and engaging us in the process of sadhana bhakti. He patiently answers our questions and addresses our doubts. Our vani or vapuh relationship is confirmed by pleasing our guru. We know he is satisfied when our taste for material life wanes and our taste for spiritual life wax. External reciprocation may be shared, but we won’t be dependent on it, or hold expectations, otherwise we may experience mundane feelings of neglect, which can lead to a crisis of faith.

By remaining faithful and steady in our practices, we give our guru the chance to extend his transcendental hand and gradually bring us into the lila connecting us to our eternal home and family.

If you feel doubts arising and your faith is weakening, then reach out to Vaisnavas whom you trust to help you work through them. If not, you could lose this most precious opportunity and be thrown back into the arms of the material energy. Srila Prabhupada once said that one stick can be easily broken but not a bundle of sticks. We need to “stick” together. These exchanges allow a strong and healthy Vaisnava sangha to forge.

4 Responses to The Possible Messiness of Vapu