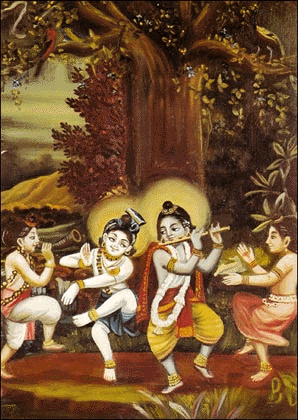 The sense in which God “plays” in the bhakti yoga tradition is not a notion outside Western thought. Plato indicated it indirectly when he described human beings as God’s “toys”—“and with regard to the best in us, that is what we really are.” Just as we are thought by Plato to have been the verse of God’s poetry, while at the same time we are responsible for what we are at present, similarly in the yoga tradition we find both action under the law of karma and its repercussions for which we are responsible, as well as God’s life beyond the karmic realm of cause and effect. Furthermore, in each case the phenomenal world is the play of God, and at the same time he has his own life transcendent to the phenomenal world. Meister Eckhardt refers to this latter sense of God’s play when he says that “This play was played eternally before all creatures.”

In the Krishna lila of bhakti yoga we encounter Meister Eckhardt’s “play that is played eternally before [the creation of] all creatures,” and also Plato’s notion that at play God is and we are “what we really are.” Thus Krishna resonates with the Platonic notion, that of an ultimate reality consisting of a transcendent world from which the mental and physical worlds are derived.

Celebrated physicist Sir Roger Penrose believes that the structures of mathematics are intrinsic to nature. Moreover, if the universe disappeared tomorrow, these eternal mathematical truths would continue to exist in a non-physical, eternal Platonic world.  Penrose writes about such a world in his book, The Road to Reality:

Platonic existence, as I see it, refers to the existence of an objective external standard that is not dependent upon our individual opinions, nor upon our particular culture. Such ‘existence’ could also refer to things other than mathematics, such as to morality or aesthetics, but I am here concerned just with mathematical objectivity, which seems to be a much clearer issue … Plato himself would have insisted that there are two other fundamental absolute ideals, namely that of the Beautiful and that of the Good. I am not at all adverse to admitting the existence of such ideals, and to allowing the Platonic world to be extended so as to contain absolutes of this nature.

In the underlying physical reality we find protons and neutrons that are in turn composed of even more elementary ingredients, such as quarks held together by gluons. However, if we ask exactly what electrons, quarks, gluons and the like are, all we can answer with are the mathematical equations that point to them. Are these sophisticated equations merely mathematical language invented to describe the physical reality, or are they underlying truths intrinsic to nature discovered by the human mind? Penrose opines that the very sophisticated mathematical equations that so precisely describe the underlying physical reality are not a human invention and that the notion that mathematical entities inhabit their own abstract world is an idea that a good number of mathematicians are comfortable with, from Pythagoras to Euclid of old, to Eugene Wigner and many in modern times. Because Penrose believes that the truths that mathematicians seek already exist, he compares mathematical research with archaeology, in which the task of a mathematician is one of discovery rather than one of invention. Arguably mathematics existed before humanity and before the physical world and speaks to us of an eternal, non-physical Platonic realm that the physical world is but an approximation of.

This notion is of course similar to the Hindu notion of transcendental Vedic mantras having no human author. Some of these mantras are thought to be eternal sound formulas corresponding with the harmonic motion of the physical world. And as Vedic mantras are thought to also reside beyond the physical realm, similarly harmonic motion vibrating in different patterns can be translated into mathematical equations representing underlying truths of the universe that also reside in an eternal, non-physical realm. Furthermore, in agreement with Plato and Penrose, such a transcendent realm may very well also include an objective absolute sense of ethics and aesthetics. Such is the world of Krishna lila, a world—a sacred geometry—of absolute beauty, charm, love, and feeling centered on the perfect object of love.

In order to further understand the nature of this realm of lila the school of Bhakti-vedanta explains that pure consciousness is reflected in psychic matter resulting in an approximation of consciousness proper. This reflection of pure consciousness is then centered on the physical world, the result of which is our emotional life and its physical ramifications. For example, a smile is the flexing of certain facial muscles but something much more as well. This more is part of our emotional life, our meaningful life. Thus pure consciousness reflected in psychic matter and then centered on physical matter results in both physical transformations and a materially meaningful but limited, non-enduring emotional life, owing to the temporal and mutable nature of the physical world it is centered on. But when pure consciousness is centered on the eternal beatific vision of Krishna at play, this results in an enduring life of emotional ecstasy. In the world of Krishna lila, perfected yogins are at play with Krishna in forms of emotional ecstasy corresponding with his form, and our material minds and bodies by contrast are but approximations of these yogin’s spiritual forms, identification with which involves more of a struggle to exist than the play of existing to love. 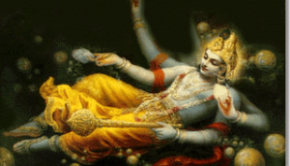 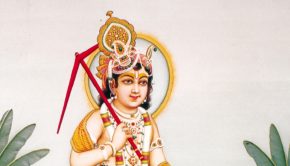 5 Responses to More On Lila