Dharma and the Modern World 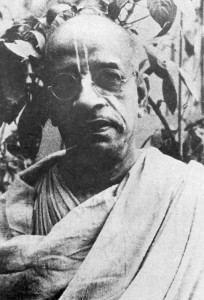 In relation to dharma, the Vaisnava acarya Srila Bhaktivinoda Thakura Mahasaya has written in his book Sri Caitanya-siksamrta as follows:

“Upon examining the historical records of all types of people around the world, it becomes obvious that faith in God is man’s common and constant characteristic. Uncivilized forest tribals survive, like animals, on animal flesh, but they also worship the sun, the moon, huge mountains, large rivers and tall trees as their benefactors and controllers. Why do they do this? Though the soul is extremely bound up, his faith in the Lord, his natural quality as a spirit soul will gradually manifest to the degree that the material covering is weakened. However, when man becomes civilized and takes to various types of knowledge and education, his faith becomes more covered due to materialistic logic. Then atheism, or worse, voidism, takes hold of his mind.”

Of the various kinds of dharma existing in this world, almost all of them aim to preach and establish belief in God. Varying endeavors of acaryas depending on time, place and circumstances, can be observed, but it can be ascertained that all of them preach dharma with the main aim of establishing a connection with the Lord. When we speak of the modern world we mean the progressive scientific world. In that modern scientific world, educated people are taking great care to come to a common understanding about the origins of dharma.

To begin to understand dharma scientifically we must first look at our scripture, the Bhagavad-gita. The Supreme Personality of Godhead, Sri Krsna has specially discussed the three fundamental principles of tattva in the second chapter of the Gita, namely body, mind and consciousness. Earth, air, fire, ether and water—these are the five gross elements, and mind, intelligence, and false-ego—these are the three subtle elements and altogether these eight elements are considered as inferior material nature. The conscious element is the living entity which is indestructible, inexhaustible, eternal, permanent and even when the aged body and mind gets destroyed it continues to exist—this topic has been discussed in the Gita. Before we discuss the development of various types of sadhana for aspirants such as karma, jnana, yoga, bhakti, etc., it is especially important to discuss the process mentioned in the Gita in relation to consciousness. Without doing so, it is not possible to come to any scientific understanding or conclusion on dharma. In this world, whatever dead matter or living characteristics are present in different elements such as that which is conscious and unconscious, beasts and birds, human beings or demons, each one of them has a unique dharma. To discuss this in detail will require a great deal of time. But whatever we generally understand about theism or the ‘belief in God’ found within dharma, is the final word in the evolution of consciousness. Covered, shrunken, budding, blooming and fully bloomed – among the observed progressive evolution of consciousness, the last three stages (namely budding, blooming and fully bloomed) are only observed in human beings. At the fully bloomed stage of consciousness, belief in God as observed at that stage is to be regarded as dharma.

The gist of such types of discussion regarding our relation with the Lord has been told in very universal language in Srimad Bhagavad-gita. Every living entity is connected to God on the platform of consciousness. That is clearly spelled out by the Lord in the Gita 14.3-4:

“O Bharata, the vast expanse of material nature is My womb which I impregnate and wherefrom all living beings manifest. O son of Kunti, all forms of life that are born in this world are ultimately born from the great womb of material nature, and I and the seed-giving father.”

“The living beings of this world are My eternal particles. These living beings struggle with the five senses and the mind, which is the sixth sense within.”

Therefore, in spite of the living beings being part and parcel of the Lord and being of the same spiritual nature, the fact is that they have fallen into the misery of birth, death, old age, and disease within material nature and have been struggling intensely from time immemorial, transmigrating from one body to another, tightly bonded by the mind and the six material senses which are the very cause of the living being’s aversion to dharma. To deliver the living beings from such a miserable state and establish their constitutional position of being eternally liberated, the Lord descends in every age to reestablish the path of dharma (dharma-samsthapanarthaya). Sometimes he personally comes and sometimes his saktavyesa-avatara comes. Therefore we should understand the term ‘real dharma’ to refer to the path of reestablishing the eternal relation of the living being with the Lord by delivering him from his previous condition of irreligiosity when he was entangled in material nature.

The manner in which civilization has advanced in the modern world means that whatever dharma was established during the Middle Ages or before that—although being suitable for that particular time and place—cannot attract the people of the modern scientific world with their expertise pertaining to the dharma of the body and mind. The people of the scientific world are all enthusiastic to understand what is the mula-tattva (the primary principal). Therefore it is necessary to discuss the fact that consciousness is the main principal of dharma.

The conception that after death or upon leaving the body, the living entity’s bondage comes to an end is not true. Depending on his karma the living being again gets a gross body and after due course of time, he again gives up that material body. When one travels from one body to another, the material desires and habits developed in relation to that particular body are carried to the next body. When the gross body is given up, the living entity travels after taking shelter of the subtle body in the form of mind, intelligence and false-ego, and during the time of death, that particular subtle body carries the key to receiving a good or a bad body just like the wind carries a good smell or a bad smell. According to one’s particular desire, again one receives another gross body. In relation to this there are various considerations pertaining to the mode of goodness, passion and ignorance which are present. According to the particular gross body one receives—for example, a human body, a tiger’s body or a demigod body, the suitable external sense organs of hearing, sight, touch, taste, smell, are given on the basis of that particular form. On the basis of previous conditioning, the mind again starts serving those things pertaining to matter and forgets its connection to the Supreme Lord.

Those who are dedicated to pure knowledge understand this predicament and come to the conclusion that the entangled position of the living entity is very miserable, thus they endeavor to establish the dharma of consciousness in order that living beings of this world are again established on the path of dharma. In spite of being expert in material knowledge, scholars whose minds are not purified, or who are attached to bodily dharma or mental dharma, fail to understand the real misery of the living entities due to a lack of sufficient experience in spiritual subject matter. The dharma they try to establish does not diagnose the root cause; hence it is affected by material degradation and becomes useless rubbish in this world. In this way, dharma decreases and materialistic scholars cannot properly understand topics related to eternal dharma.

If we continue to remain busy with dharma pertaining to the body and mind in the company of the progressive civilized people of this modern world, we will never be able to achieve equality. When we come under the spell of bodily dharma, some of us think ourselves to be Hindus, some as Muslims, some as brahmanas, some as sudras, some as Bengalis, some as Biharis, some as Indians, some as English, some as men, some as women, some as humans, some as animals, etc. and thus differences arise. Under the spell of mental dharma people have formed many sectarian groups, some claiming themselves to be Congress members, some as belonging to a league, some as socialists etc. But Bhagavad-gita (5.18) says that those who are true scholars are all sama-darsi (having equal spiritual vision). For example:

“A wise man sees a learned and humble brahmana, a cow, an elephant, a dog, a lowborn person and all other living beings as equal.”

The very last instruction of the Gita is to accept bhagavata-dharma and abandon dharma based on the platform of the body and mind. That type of bhagavata-dharma is meant for jnanis who have developed transcendental qualities. It rejects any form of discrimination on the basis of gross bodily differences of superior, medium and inferior forms and embraces an equal vision, irrespective of different bodies such as that of an elevated brahmana, a cow, an elephant, a dog or a candala (outcaste).

Therefore, establishing proper dharma and bringing about universal equality, which modern progressive cultured society is endeavoring to establish, is never under the purview of bodily dharma or mental dharma. That is the dharma of the soul, or the dharma of consciousness. In order to establish that dharma of consciousness in the modern world Srimad Bhagavad-gita has given ample instructions about what needs to be done. Nowadays in many conferences and meetings, many respectable and highly educated people assemble together and cultivate hopes of establishing an egalitarian and universal dharma which is in synchrony with the modern world. This can be solved very effectively mostly through the Srimad Bhagavad-gita and especially the Srimad Bhagavata.

The dharma instructed in Srimad Bhagavata is meant for people who are free from envy (nirmatsara). People who are engaged in bodily and mental dharma can never be non-envious. In their case, it should be understood that envy itself is their dharma. Thus, when envy is present, there is no question of establishing equality. There is always the presence of envy in the sub-religious goals of dharma, artha, kama and moksha. Therefore, these four paths of dharma will never be able to provide any real solution. If one does not develop compassion upon seeing the sorrows of others, without understanding the root cause of the living entity’s misery, one will never be able to properly estimate the value of eternal dharma. That which delivers us from the threefold miseries and shows us the ultimate reality is the ultimate dharma of the living entity. That is why Suta Gosvami has said in the Srimad Bhagavata (1.2.6 and 1.2.8):

“Dharma, executed by men, regardless of occupation, is only so much useless labor if it does not provoke attraction for the message of the Supreme Lord.”

Therefore, in order to establish the non-envious causeless bhagavata-dharma, it is essential that the intelligent people of this world endeavor to analyze and discover a new approach to present that eternal ancient method of preaching sanatana-dharma. Within the entire world Bharata-varsa is the greatest place of dharma. and within India Bengal is the best. Sri Caitanya-deva, the deliverer in Kali-yuga, appeared within the Bengali community. It is essential that we analyze how He preached Srimad Bhagavad-gita and Srimad Bhagavata in a very pristine and transcendental method in order to preach Bhagavata-dharma in a non-envious fashion.

“Please take into consideration the mercy of Sri Krsna Caitanya. If you do so, you will find it to be most wonderful.”Caitanya Caritamrta, Adi 8.15

4 Responses to Dharma and the Modern World