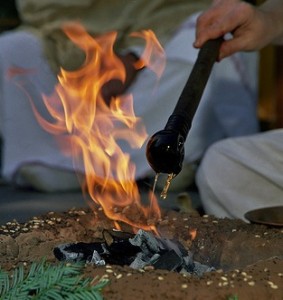 A. Gopala Bhatta Goswami and Sanatana Goswami, the authors of Hari-bhakti-vilasa, were both personal associates of Sri Caitanya Mahaprabhu. Still, I am not aware of any modern Gaudiya Vaishnava sect that follows Hari-bhakti-vilasa to the letter. Indeed, in this day and age trying to do so would be next to impossible. A devotee in the lineage of Gopala Bhatta Goswami, Srivatsa Goswami of the Radha-Ramana temple in Vrindavana, once told me, “No one follows Hari-bhakti-vilasa more strictly than our lineage.” Hearing this I laughed and replied, “So you do not follow it completely either.” His subsequent silence spoke volumes.

The history of Hari-bhakti-vilasa involved the need to establish standards of behavior and worship for the Gaudiya lineage in a religious culture in which the rule-based and love-less smriti of the smarta-brahmanas was prominent. The book was an effort to provide a structure for our sampradaya to support its members and lend credence to the lineage in the climate of the times. It is an important and empowered book, yet acaryas in our lineage have found room to forego some of its recommended procedural details while establishing the principle they are intended to support.

Q. Hari-bhakti-vilasa says something to the effect that without receiving mantra-diksa, chanting the Hare Krishna maha-mantra (harinama) on its own will not take one back to Godhead. How are we to understand this?

A. Harinama surely has the power to deliver one from the cycle of birth and death (samsara) as well as to bestow ecstatic love of God (prema). However, diksa, or initiation into the chanting of the 18-syllable Krishna mantra, is essential in terms of helping materially conditioned souls take full advantage of the liberated name of God—harinama. The idea is that we can use all the help we can get.

The 18-syllable Krishna mantra consists primarily of names of Hari, particularly Krishna, Govinda, and Gopi-jana-vallabha. Within the mantra, these names appear in the dative case, indicating an indirect object or recipient (“to Govinda I offer myself,” for example). In contrast, the vocative case is used in directly addressing or invoking a person or thing, which is how the names appear in the Hare Krishna maha-mantra. In the Krishna mantra, the names are preceded by the kama-bija (seed) and followed by svaha, or the giving of oneself. Thus the Krishna mantra fosters self-surrender (saranagati), which is the platform on which bhajana and lila-seva are successfully performed. It also reveals one’s svarupa, or relationship with Krishna, who is non-different from his name.

The Krishna mantra facilitates a particular relationship with the divine name. When this is revealed, the efficacy of the mantra is realized and one can then continue to chant harinama such that one’s nama bhajana is fully informed with realized knowledge—sambandha jnana. Such nama bhajana nourishes lila smaranam and together the two, harinama and the meditation on one’s relationship with the divine name, give one Krishna prema.

Thus it is important not to avoid mantra diksa, as even Krishna and Sri Krishna Caitanya accepted mantra diksa to set an example for others to follow.

Q. Some devotees say that chanting the Hare Krishna maha-mantra is sufficient to install the Deity (arca vigraha) in a home or temple. Others refer to Hari-bhakti-vilasa, which indicates that a certain ritual (prana pratistha) needs to be performed in order to make any Deity installation complete. What is your understanding of this?

A. The arca vigraha, or arca avatara, should be properly installed under the auspices of one who has fixed the deity within his or her heart. First sri murti appears in a realized soul’s heart, and from there it is established externally as a sharing of that Vaishnava’s divine love. In other words, the Deity appears to accept seva from us through the will of the Vaishnava acarya. If his will is in place, the deity will fully manifest. The will of the Vaishnava is the heart of the descent of the arca avatara. All other procedures are secondary and serve simply to assist the will of the acarya.

Thus we find that while important, the procedures cited in Hari-bhakti-vilasa regarding deity installation are details that are expendable at the discretion of the acarya. By his divine will, my Guru Maharaja established many deities throughout the world and in doing so he modified the procedures given in Hari-bhakti-vilasa as he saw fit. In short, if the will of the Vaishnava is behind the installation and nothing else, it is complete, but if all the other procedures are in place and the Vaishnava’s will is absent, the installation is not complete. The appearance of Krishna in any form is tied to the love that his devotees have for him. Indeed, love of Krishna and Krishna are one. You cannot have one without the other.

Q. During Chaturmasya, a four-month period during India’s rainy season, a vow of austerity involving fasting from certain foods is encouraged. Skanda Purana and other scriptures state that this vow is compulsory for everyone, and in his Caitanya-caritamrta (Madhya 4.169) Srila Prabhupada concurs saying that observance of Chaturmasya is obligatory for all asramas. Srila Prabhupada also states that the main purpose of the Chaturmasya vow, which ends in Kartika, a very holy month for Vaishnavas, is to reduce sense gratification.

However, although this is stated in his Caitanya-caritamrta, and we know that his guru Srila Bhaktisiddhanta followed this vow, our Srila Prabhupada didn’t establish Chaturmasya as a regular observance in his society as he did with Ekadasi. Why is this? Is it because Chaturmasya is only applicable in India where people are forced to curb their activity during the rainy season?

The real purpose behind such observance is to promote the spirit of self-giving. Pujyapada Sridhara Deva Goswami comments on the observance of Chaturmasya and similar vows thus:

Thus we should try to embrace the essence of the observance of Chaturmasya and similar vows. Penance and austerity have little value in and of themselves. Giving one’s heart is real giving. It should also be noted that observing festivals for Hari (another anga of bhakti) should be in consideration of one’s resources. Thus it may be reasonable to consider that observing Chaturmasya vows with regard to details should be done in accordance with one’s resources, and one’s resources are largely determined by one’s environment.

As mentioned above, observance of the Urja-vrata related to the Kartika month has been differentiated from the Chaturmasya vows as an anga of bhakti. Visvanatha Cakravarti Thakura places it on the same level as observing Ekadasi, identifying it as something that both directly and indirectly promotes raga-bhakti. About its observance, Sri Jiva Goswami writes as follows, commenting on a verse from Padma Purana:

The month is affectionate just as Damodara is affectionate. Thus a little service to Damodara becomes multiplied if performed during that month. Uru-karaka means a person (in this case the month) who accepts something very small and makes it big, like a person who feels extremely indebted and performs great actions for another person. Similarly, his month, called Kartika month, gives great benefit. It takes what is meager and makes it significant. Svalpam uru-karakah means “The month of Damodara is a future giver of huge results for a little service.”

Thus I would advise observance of the Kartika vrata and I would not stress strict observance of Chaturmasya outside of India. Again, even within India such observance, although recommended, is not an anga of bhakti, whereas the observance of Kartika is.