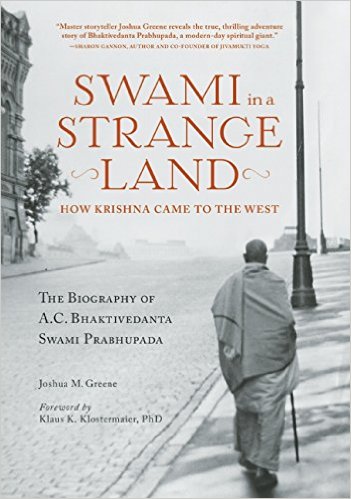 In 1965, a frail-looking Indian man stepped off a cargo ship in New York wearing thin saffron robes with only a few dollars to his name. Surviving two near fatal illnesses during his ocean crossing, the seventy-year old Bhaktivedanta Swami knew no one in New York, and had never been outside India. But he was on a mission, determined to spread the teachings of Krishna, the Supreme Being of the ancient Vedic scriptures, and save the world. Western perceptions of Eastern spirituality would never be the same. In Swami in a Strange Land: How Krishna Came to the West, The Biography of A.C. Bhaktivedanta Swami Prabhupada (Mandala Publishing, May 2016), author Joshua M. Greene takes readers along for this spiritual journey.

It’s the same journey that was traced in Greene’s bestselling biography of George Harrison, Here Comes the Sun: The Spiritual and Musical Journey of George Harrison (John Wiley, 2006). The late Beatle  was one of many well-known followers who studied with Swami Prabhupada. He is also is credited with helping Prabhupada popularize the chanting of Hare Krishna—a fundamental practice of Krishna Consciousness—on records that topped the charts in the 1970s and 80s.

It took Prabhupada forty years of poverty and obscurity before he was at last able to leave India and begin spreading Krishna Consciousness to the rest of the world. During that time, his businesses failed, his marriage dissolved, his letters to India’s leaders were ignored, and fellow disciples offered little encouragement. Still, he kept on, writing English commentaries of Krishna’s teachings, publishing essays that challenged reductionist scientific explanations of life, and securing the papers needed to leave India.

In the next twelve years he would build an international movement with millions of followers, translate dozens of Sanskrit sacred texts, establish hundreds of centers to Bhakti (devotional) yoga, and make Krishna a household name.

There is a David-and-Goliath quality to this epic story of Prabhupada, who as a young Bengali boy witnessed the Hindu-Muslim strife fomented by British rule. In college, he left Gandhi’s movement to become a follower of Krishna after meeting Bhaktisiddhanta Saraswati, the teacher who gave him the mission to spread Krishna consciousness around the world. By taking up the challenge, the young Prabhupada set himself the daunting task of proving that Krishna was not a Hindu divinity but the source of all creation, and the chanting of Krishna’s names not an Indian religious ritual but a universal formula for bringing peace and prosperity back into the world.

Starting out in a tiny storefront in New York’s derelict Bowery neighborhood, Swami Prabhupada taught the Bhagavad Gita, the essential teachings of Krishna, and initiated the first Krishna followers in the Western world. He was the modern-day representative of Bhakti—devotional Yoga—which had experienced a renaissance centuries before. In the sixteenth century, Chaitanya Mahaprabhu, identified in Vedic texts as Krishna himself, wrested the names of Krishna away from the sectarian Brahmin religious leaders and distributed them publicly through massive chanting parties. These were the forerunners of the thousands of chanting parties people join in around the world today.

Throughout the pages of this highly entertaining account, readers cross paths with some of the cultural figures of the 60s and 70s, including the Beatles, beat poet Allen Ginsberg, political leaders, and renowned scholars. Greene exercises a gift for melding biographic detail with authentic dialog to produce “you-are-there” immediacy in his writing.

He tells a colorful story, rich in detail, whether he’s discussing the verdant forests of Vrindavan, Krishna’s boyhood home, or New York’s Hudson River, “as foul as a sewer.” Today, as an experienced biographer and leading authority on Hindu studies and the ancient wisdom of India, Greene still retains the intimacy with his subject that he learned during his early days as a Hare Krishna initiate named Yogesvara by Prabhupada. In the role of witness to these fascinating events, and in presenting the life of a little-known but immensely influential spiritual leader, he takes us on an inspiring journey of spiritual devotion and provides an invaluable cross-cultural history.

By the story’s dramatic conclusion, readers have met a true holy being, and many may come to agree with Greene that the title’s “strange land” is the world we all inhabit, and that the Swami has come to free us all from our illusions.

This article was originally published at Blogcritics Magazine, and is reproduced here without the permission of the author, who is not affiliated with this website or its views.