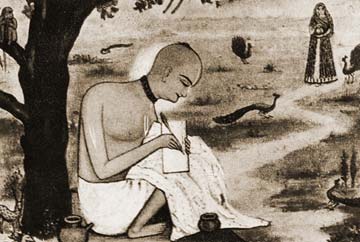 Sri Upadesamrta: Text One, Part One 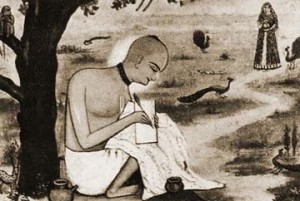 A self-controlled person who can overcome the impulses of speech, the mind, anger, the tongue, belly and genitals is qualified to instruct the whole world.

One time our Guru Maharaja (Srila Bhaktisiddhanta Saraswati Thakura) arranged to preach in Vrindavana for the full month of Kartika. He chose to speak from the basic teachings of the Upadesamrta of Srila Rupa Goswami. His attention was always focused on the basics, because he felt that the fruits of devotion will come naturally. Pour water onto the root and the fruit will come by itself. Upadesamrta contains the substance of Sri Caitanya Mahaprabhu’s teachings in the language of Srila Rupa Goswami. These eleven verses of Upadesamrta were inspired by the advice of Mahaprabhu and Rupa Goswami put that advice into poetic language.

Guru Maharaja himself spoke for several days on the boundary line between Radha kunda and Shyama kunda. He read and explained the Upadesamrta. Srila Prabhupada explained Upadesamrta and nothing of Govinda-lilamrta or Visvanatha Cakravarti’s Sri Krishna Bhavanamrta. The higher topics of madhurya lila, Radha-Krishna’s amorous pastimes, were left aside. His attitude was, “People are ripe in sahajiya, imitation of devotion. Just try to make them understand, to enter the plane of bhakti. That is so great; what to speak of Krishna lila—that is far, far above.” These were his words.

Pujala raga-patha gaurava-bhange—the whole sphere is taken at a respectable distance on the head. Go on working in the lower level, to show proper respect to the highest thing, don’t venture to enter—fools rush in where angel’s fear to tread. With this idea, he dealt everywhere.

The Impulse of Speech and the Mind

Vaco-vegam means the urge to speak. One is habituated to speak too much. That tendency to speak is always there, whether it is good or bad. There is no time to discriminate—always talking and talking. I may speak anything and everything and then later repent, “Why did I say like this? I should not have said such a thing only to pain the hearts of others.” When the force comes from within to say something we cannot control it. “I am straightforward—I can say anything and everything to anyone and everyone! I may even abuse a sadhu.” This should not be. We must try to control that force coming from within in the form of speech.

It is difficult to control the inner mind, but when we preach to others, we cannot but be all-conscious. We cannot talk irrelevantly. We can easily have concentration when we talk about Krishna—that is kirtana. I may begin with some japa but my mind wanders here, there and everywhere. But when I am engaged in kirtana, I must be fully attentive. In that way we can control the mind, which is very difficult to capture and to utilize.

Simply by moving the lips to chant the Lord’s holy name one can attain the greatest benefit. (Hari-bhakti-vilasa 11.453)

Special stress has been put on kirtana by Mahaprabhu. Kirtana means to preach. The environment is prepared to attack me, I should rather take up the offensive than the defensive—I shall attack the environment! Kirtana means to take the offensive. The whole environment is surcharged with the offensive spirit. They are coming and attacking me from different directions, through different ideas that are like spies that are already within us: their agents. I shall take the offensive and attack the environment with the power that I have received from my Guru Maharaja. That means kirtana. That means preaching. This is what we are told by our Guru Maharaja, Bhaktisiddhanta Saraswati. Preaching means to attack the environment, not to lie down passively and allow others to take the position. Japa is very feeble, a weak thing. You will begin your japa and when you are aware you will find that your mind is marketing in some other place. But when you are talking about Krishna to others, you will be fully attentive. That is automatic attention. Therefore you can control the mind by preaching.

The Impulse of Anger

Then there is krodha-vegam. Krodha means anger. When anger comes, it creates a disaster and a reaction is inevitable. We must try to check that sort of flow of the mind towards anger. We shall not try for anger, but what we have we shall try to utilize it for the service of Krishna.

Good or bad, whatever is within you, that must be thrown away for the object of Krishna’s service. It may be adjusted in this way: I have got anger and that anger should be utilized in favor of the service of the Lord. Krodha bhakta-dvesi-jane, whoever comes to attack the devotees, I will use my anger against him. We make the best of a bad bargain. So many tendencies are in my mind and when I want to transform them wholesale within my mental system, I shall try to adjust them in connection with divine service. I shall try to utilize them in that stage.

In some stages it may seem that a devotee becomes angry by even a little cause, but that anger should not be classified as ordinary anger. His anger will do good to the person with whom he is angry, it is for the well being of the man with whom he is angry. They cannot be judged independently. Mahaprabhu was angry sometimes. When Mahaprabhu was going on with kirtana, they closed the door and one brahmacari who was only drinking milk and nothing else wanted to enter. He thought that, “I must be considered to be purest because I drink only milk, nothing else. Why have they closed the door to me?” Then at last when the door was opened, and he asked why the door was closed to him, Mahaprabhu replied, “Simply drinking milk is no qualification. The real qualification is Krishna consciousness.”

This has been seen many times. There was some misbehavior done against Srivasa Pandita. A tantrika placed some wine and other things at the door of Srivasa’s house at night in order to ridicule him. Srivasa Pandita opened the door and saw wine, meat and other nasty things. Then he went to his neighbors and said, “Please see how I am a tantrika. Every night with the help of this meat and wine I worship Goddess Kali.” Then those gentlemen felt very disturbed, “Who is the rogue who has done this thing?” When Mahaprabhu was informed he was very much enraged and said, “That man will have to suffer!” Later, that man whose name was Capala Gopala got leprosy. Sometimes in this world some anger is shown by the incarnation of God himself, and some devotees also. But that is not harmful. It is for the good of the person. The excitement found in a devotee should not be taken as ordinary.

We have to quarrel. Sometimes we may have to engage in litigation; sometimes there are differences in our realizations concerning the proper meaning of the particular mantras of the scriptures, or a particular point. There may be differences and discussions. It is not undesirable. Sometimes it is necessary. Generally we are to think that we are not in a perfect condition, our differences will be due to our realization, our degree of realization. Everything varies, but differences amongst the main principles is deplorable and will cause disturbance to the newcomers. It is a great catastrophe for the newcomers. They have come with open faith of a very mild standard; their faith is not so high, not so intense that they will be able to tolerate many things which seem to be like discord. The difficulty is with them. Whenever such things are happening, generally the madhyama-adhikari Vaisnava should try to keep the beginners outside. They should not be allowed to enter into these discussions and differences; the quarrel, litigation and all these things. This is only reserved for madhyama-adhikaris. It is undesirable for the beginners to see the differences between the higher personalities whom we consider to be upper rank. When they observe such quarreling the lower class cannot but be disturbed. Try to avoid this as much as possible. At that time they may give their attention towards the scriptures. There is less quarreling, but in scriptures there is also quarreling, because their recommended advice is for different stages. Progress means quarrel. Elimination and acceptance, that means quarrel. One condemns another, progress means such. We can’t avoid it altogether, but still progress is there. We must not be afraid.

4 Responses to Sri Upadesamrta: Text One, Part One