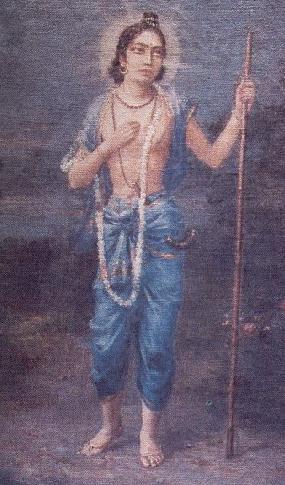 With his seventh mangala verse, Sri Krsnadasa Kaviraja Goswami begins a five verse glorification and explanation of Nityananda-tattva, the metaphysical and ontological status of Sri Caitanya’s other self. Here we learn that the one God, svayam bhagavan, Sri Krsna, manifests in two bodies, not as sakti and saktiman, but as a plenary expansion of himself, thus making for a second, delegated saktiman or energetic source through whom many tasks are accomplished. In this case, Krsna expands and expresses himself as Balarama (Rama) and this same Balarama appears with Gaura Krsna as Nityananda-rama.

However, although Sri Balarama is saktiman, he is also principally an emotional wave of fraternal love in the ocean of bhakti rasa. Although he is Krsna’s elder brother in lila and in this sense senior within the lila, he is at the same time subordinate in terms of tattva. He is the immediate expansion of Krsna and in this sense saktiman, but as the embodiment of fraternal love he also acts as if a sakti in relation to Krsna. He is the Rama “who gives pleasure to Krsna,”1 as his best friend, and appearing as Nityananda he gives pleasure to Gaura and distributes fraternal love of God. The two, Nitai and Rama, are the same person in an extraordinary extension of the same lila—from Krsna-lila to Gaura-lila.

In his discussion of the first of his five verses glorifying Nityananda-rama, Kaviraja Krsnadasa draws our attention to Balarama. As the immediate expansion of Krsna, he further manifests in five forms for lila, intimate, majestic, or creative. Balarama is the elder brother of Krsna appearing in lila before him even as he has his origin in Krsna. To say that he has his origin in Krsna, is not to say that he begins in time. It is to say, that aspects of Krsna are found in him but not the entire emotional content of Krsna. Of all eternal manifestations of Krsna composed of slightly different emotional content—vaibhava prakasa—Balarama is most like him.2 He personifies the emotions of a slightly older, affectionate brother, and as such in lila he is Krsna’s best friend. His friendship is manifest more prominently in the intimate lilas of Vraja, while the sense of his being Krsna’s elder is manifest more prominently in Krsna’s Dvaraka-lila,3 even as the two nuanced sentiments overlap into each of these lilas. As the elder brother his fraternal love for Krsna is mixed with parental love, and as the personification of the serving ego his fraternal love is also tinged with servile love. Thus he presides over dasya, sakhya, and vatsalya rasas—sambandha rupa—leaving the domain of madhurya rasa—kama rupa—to Sri Radha.

While over the centuries there have been attempts to identify Nityananda with madhurya rasa, such identification is not found in Sri Caitanya-Caritamrita. Indeed, when Gaura in his sannyasa lila manifests himself as Radha during the Puri Ratha-yatra, Sri Krsnadasa sees Nityananda offering prayers in deference to her/him from a distance.4 Kaviraja Goswami’s predecessor and earlier biographer of Sri Caitanya, Vrindavan dasa Thakura, does however underscore the evidence from Srimad Bhagavatam that in Krsna lila, Nityananda as Balarama consorts with his own gopis. However, he does this only to emphasize the divinity of Balarama, for Balarama’s interaction with his gopis is clearly secondary to his fraternal love for Krsna. Bhaktisiddhanta Saraswati Thakura refers to it as “maryada” not raga-marga bhakti,5 and Jiva Goswami in his Gopala Campu envisions Balarama marrying these milk maidens only upon returning to Vraja for the primary purpose of pacifying Krsna’s raga-marg gopis. In pacifying them he purely represents Krsna, without any desire to enjoy personally with Krsna’s gopis.

Thus unlike Krsna, Rama’s fraternal love and his presiding over sambandha-rupa raga-bhakti takes precedence over his relationship with his own gopis and his relationship with Krsna’s gopis is not personally romantic.  However, Balarama does manifest himself in a sakti-tattva form as Radha’s younger sister, Ananga-manjari. Therefore some have reasoned that it is in this form that he experiences madhurya-rasa with Krsna. Unique among the gopis of Vraja, Ananga manjari, tastes both the ecstasy of a handmaiden of Radha and also the ecstasy of direct union with Krsna. However, Krsnadas Kaviraja has not mentioned Ananga-manjari in his treatment of Nityananda-rama, nor has Vrndavana dasa in Caitanya Bhagavata. However, in his Govinda-lilamrta, Krsnadasa Kaviraja has identified her as a sakti expansion of Ananta-sesa.

That said Ananga manjari becomes Nityananda-rama’s consort in Gaura-lila.6 And through Jahnavi-devi we do find a prominent connection with madhurya-rasa, while Nitai himself remains absorbed in fraternal love of God. Suffice it to say, that in the opinion of Sri Krsnadas Kaviraja Goswami, Nityananda appeared to serve Gaura Krsna in fraternal love, to distribute that same love, and also to facilitate Gaura’s pursuit and distribution of madhurya-rasa. It is thought that he further facilitated this distribution through his expansion Jahnavi-devi.

Srimad Bhagavatam highlights Balarama’s fraternal love for Krsna as well as the parental and servile love that augment it.7  The Bhagavata’s fifteenth chapter of its Tenth Canto pays tribute to Balarama, while centering on fraternal love of God—sakhya-prema. Although we find an apparent reference to Rama’s romantic life therein, this too speaks only of his friendship with Krsna. Commenting on Krsna’s praise of Rama in terms of his relationship with the milk maidens in Srimad Bhagavatam 10.15.8, Rupa Goswami informs us that this is merely a display of joking or hasya-rasa between Krsna and Rama within the context of sakhya-rasa.8

This fifteenth chapter of the Bhagavata’s Tenth Canto summarizes the essence of Krsna’s pauganda or boyhood lilas with his friends and cows—from boyhood to adolescence (kisora).  It is Krsna’s pauganda-lila that highlights sakhya-rasa, and as one would expect, this period of Krsna’s age is itself an “exciter” or uddipana-vibhava for this sentiment, of which Balarama is the leader.  Balarama leads the other cowherds as the perfect example of sakhya-rasa.  Although he is God himself, he personifies the serving ego9 and knows nothing other than service to Krsna.  The venerable A.C. Bhaktivedanta Swami Prabhupada contrasts him with Krsna by referring to Krsna as the “Supreme Personality of Godhead served” and Balarama as the “Supreme Personality of Godhead servitor.”  Thus Balarama is served both in consideration of his serving ego which others should seek to also embody and as an object of service unto himself. He is the leader of sakhya-rasa who both accepts service as an object of fraternal love and embodies fraternal love centered on Krsna. He appears in Gaura-lila as Nityananda Prabhu accompanied by twelve associates who follow him from Krsna-lila. These are the well-known dvadasa (twelve) gopalas (cowherds).

Arguably, it was Nityananda-rama who started the Caitanya Sampradaya, he and his twelve associates. While Gaura taught the worship of Krsna, the chanting of his name, and the following of his instructions, Nitai boldly asserted that is was Gaura who should be worshiped, Gaura’s name that should be chanted, Gaura’s instructions that should be followed—bhaja gauranga kaha gauranga laha gaurangera nama re. Those who do so—who worship Gaura—Nitai proclaims that they purchase him outright—ye jana gauranga bhaje sei amara prana re. He made such claims in Bengal long before the Vrindavan Goswamis were instructed by Gaura to write philosophy and theology concerning the nature of his descent, long before they wrote extensively about him and about the bhakti that he embodied. Following his lead, his twelve associates opened centers from which they taught about Gaura/Bhakti lineages of sakhya-rasa.

Kavikarnapura has divided the leaders of the Gaudiya Sampradaya into two groups, gopalas and mahantas. The gopalas were the associates of Nityananda and identified with sakhya-rasa in Krsna lila. They were the first organization within Gaudiya Vaisnavism and appointed directly by Sri Caitanya to propagate nama-dharma. By the end of the 16th century another group of upa-gopalas (subordinate gopalas) mentioned later in Krsnadasa Kaviraja’s text formed further sakhya-rasa lineages.10 It is from these lineages that the seva-puja of Gaura Nityananda came to the world, originating in the house of Gauridasa Pandita, who is identified in Krsna-lila as Subala-sakha, Krsna’s bosom buddy.

Predating Krsnadasa Kaviraja Goswami, the legendary Vyasa of Caitanya-lila, Sri Vrndavana dasa Thakura penned his Caitanya Bhagavata under the inspiration of Nitai, whom he refers to as his inner guide—antaryami nityananda. Vrindavana dasa conceived of himself as a sakha in Krsna lila. His ista-devata in his practicing life was Sri Nityananda. He saw Gaura to be non-different from Krsna. About Gaura he writes, that it would be improper to compare him as he sits on the banks of the Ganga with his students to the full moon surrounded by stars, for the moon has spots and Gaura is spotless. Nor can Nimai Pandita be compared in that setting to Brhaspati, the guru of the gods, for Brhaspati is partial only to the gods and Gaura is partial to everyone. However, he writes, there is one thing in this world he can be compared to. As his readers are pressed in sacred wonder to turn the page of Caitanya Bhagavata, so too are they filled with spiritual wonder to read his comparison, Gaura and his classmates parallel Krsna’s sitting among his gopa friends in sakhya-rasa along the bank of the Yamuna!—nanda gopa yamuna tire saha gopa gana. Such is the early beginning of Caitanya Vaisnavism’s connection with sakhya-rasa, presided over as it is by Nityananda-rama.  So too does Nityananda-rama play a significant role in the “final word” of Caitanya Vaisnavism in the form of Sri Caitanya Caritamrita. It was also Nityananda who inspired our venerable author, Sri Krsnadasa, to leave home and take up residence in Vrindavana from where he would pen his masterpiece mostly in Bengali. Giving the Vrindavana Goswami’s realizations concerning Sri Caitanya written in Sanskrit back to Bengal and from there to the rest of the world. From within his own preference for sakhya-rasa, Nityananda-rama played a major role in circulating the news of Sri Krsna’s descent in pursuit of Radha’s love which is central to Sri Caitanya Caritamrta.