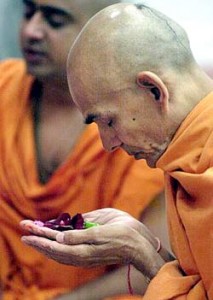 Of the many forms of worship, kirtan, or singing the name of Krishna, is the best. Humble knowledge is necessary in any form of worship and fruitless discussions must be avoided.

However, there are some who question the idea of worshiping sri murti. “Oh.” they say, “it is idolatry to worship sri murti. Sri murti is an idol framed by an artist and introduced by no other than Beelzebub himself. Worshiping such an object would rouse the jealousy of God and limit his omnipotence, omniscience, and omnipresence!” We would tell them, “Brethren! understand the question and do not allow yourself to be misled by sectarian dogmas. God is not jealous, as he is without a second. Beelzebub or Satan is no other than an object of imagination or the subject of an allegory. An allegorical or imaginary being should not be allowed to act as an obstacle to bhakti.

Those who believe God to be impersonal simply identify him with some power or attribute in nature, though in fact, he is above nature, her laws and rules. His holy wish is law, and it would be sacrilege to confine his unlimited excellence by identifying him with such attributes as omnipotence, omnipresence, and omniscience—attributes which may exist in created objects such as time, space, etc. His excellence consists in having in him mutually contradicting powers and attributes ruled by his supernatural self. He is identical with his all-beautiful person, having such powers as omnipresence, omniscience, and omnipotence, the likes of which cannot be found elsewhere. His holy and perfect person exists eternally in the spiritual world and at the same time exists in every created object and place in all its fullness.

This idea excels all other ideas of the deity. Mahaprabhu rejects idolatry as well, but considers sri murti worship to be the only unexceptionable means of spiritual culture. It has been shown that God is personal and all-beautiful; sages like Vyasa and others have seen that beauty in their souls’ eyes. They have left us descriptions. Of course, word carries grossness of matter. But truth still is perceivable in those descriptions.

According to those descriptions, one delineates a sri murti and sees the great God of our heart there with intense pleasure. Brethren! Is that wrong or sinful ? Those who say that God has no form—either material or spiritual—and again imagine a false form for worship are certainly idolatrous. But those who see the spiritual form of the deity in their souls’ eyes, carry that impression as far as possible to the mind, and then frame an emblem for the satisfaction of the material eye for continual study of the higher feeling are by no means idolatrous. While seeing a sri murti, do not even see the image itself but see the spiritual model of the image and you are a pure theist. Idolatry and sri murti worship are two different things, but my brethren, you simply confound one with the other out of hastiness. To tell the truth, sri murti worship is the only true worship of the deity, without which you cannot sufficiently cultivate your religious feelings.

The world attracts you through your senses as long as you do not see God in the objects of your senses; you live in an awkward position which scarcely helps you in procuring you your spiritual elevation. Place a sri murti in your house.

Think that God almighty is the guardian of the house. The food that you take is his prasadam. The flower and scents are also his prasadam. The eye, the ear, the nose, the touch, and the tongue—all have a spiritual culture. You do it with a holy heart and God will know it and judge you by your sincerity. Satan and Beelzebub will have nothing to do with you in that matter. All sorts of worship are based on the principle of sri murti. Look into the history of religion and you will come to this noble truth. The Semitic idea of a patriarchal God both in the pre-Christian period of Judaism and post-Christian period of Christianity and Mohammedanism, is nothing but a limited idea of sri murti. The monarchic idea of a Jove amongst the Greeks and of an Indra amongst the Aryan karma-kandis is also a distant view of the same principle.

The idea of a force and jyotirmaya brahman of the meditators and a formless energy of the shaktas is also a very faint view of the sri murti. In fact the principle of sri murti is the truth itself differently exhibited in different people according to their different phases of thought. Even Jaimini and Comte who are not prepared to accept a creating God have prescribed certain phases of the sri murti—simply because they have been impelled by some inward action from the soul! Then again, we meet with people who have adopted the cross, the sri murti, the lingam, and suchlike emblems as indicators of the inward idea of sri murti. Furthermore, if the divine compassion, love, and justice could be portrayed by the pencil and expressed by the chisel, why should not the personal beauty of the deity embracing all other attributes be portrayed in poetry or in picture, or expressed by the chisel for the benefit of man? If words could impress thoughts, the watch could indicate time and sign could tell us a history, why should not the picture or figure bring associations of higher thoughts and feeling with regard to the transcendental beauty of the divine personage?

Sri murti worshippers are divided into two classes: the ideal and the physical. Those of the physical school are entitled by their circumstances of life and state of mind to establish temple institutions. Those who are entitled to worship the sri murti in their mind have, with due deference to the temple institutions, a tendency to worship by sravana and kirtana. Their church is universal and independent of caste and color. Mahaprabhu prefers this latter class and shows such worship in his Siksastakam.

Worship then. Without intermission and with a feeling of resignation, and in a very short time you will be blessed with prema.

This article was edited and excerpted from The Life and Precepts of Sri Chaitanya Mahaprabhu, published in 1896.

2 Responses to On Idolatry