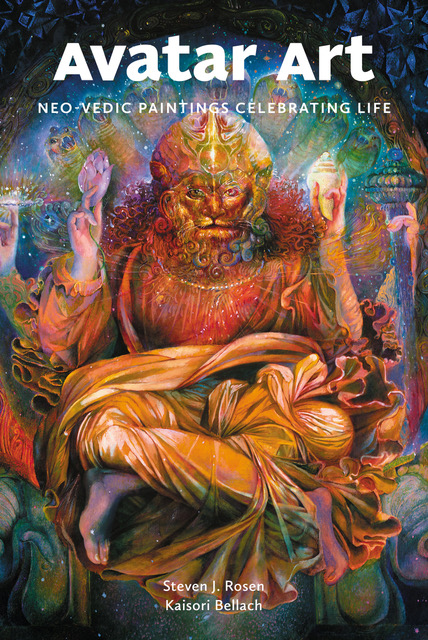 On one level, Avatar Art is a fairly straightforward book. Published by the Bhaktivedanta Book Trust—the in-house press of the International Society for Krishna Consciousness (ISKCON)—it is a catalog of paintings created to illustrate the many books authored by ISKCON’s prolific founder, A.C. Bhaktivedanta Swami Prabhupada. On another level, however, there is more to the book than first meets the eye. In its relatively concise 224 pages, Avatar Art manages to pack in several different books, serving many purposes in one attractive and accessible volume. It is a beautifully designed coffee table book—one shrunken down to paperback size and priced affordably enough for even the most budget-challenged. It is a thoughtful re-telling of some of Hinduism’s most beloved tales, from texts like the Bhagavata Purana and Mahabharata, in language that is intelligible and attractive to readers at all levels of familiarity with the tradition. It also serves as a thematic journey through the richness of Chaitanya Vaishnava Hindu theology; in this respect, it might be seen as a visual and literary overview of Krishna consciousness, at least in nutshell form. And finally, it serves as an important historical recording of one of the most fascinating and yet overlooked aspects of the development of the global Krishna movement: the forging of a new culture through the creation and interpretation of original visual art. This is something only hinted at in the book itself—most notably in its introduction—but I will return to this last point a bit later in the review.

The layout of the glossy color book—featuring a full-page rendering of each painting alternating with a page of explanatory text—allows the publishers to showcase a number of stunning works. Indeed, the book boasts 102 paintings by 27 different artists. Its compact size notwithstanding, Avatar Art is an art book through and through, and high-quality production ensures that the paintings are given the best opportunity to shine. Readers are treated to the vivid colors and sweeping, full canvases that establish each of these works as so much more than mere illustrations—they are, it becomes clear, important expressions in their own right. The choice of paintings is likewise significant. There are some well-known works by artists famous within devotee circles, like Americans Marek Buchwald (Baradraj), Matthew Goldman (Puskar), and Judy Koslofsky (Jadurani Devi)—the movement’s first, and arguably most influential, artist. But these are balanced with lesser-known but equally striking offerings from a number of other Krishna devotee painters. For instance, Avatar Art chooses—wisely, I think—to tell the famous story of Krishna and the serpent Kaliya by featuring an unusually saturated, lush rendition by Kaliyev Edik (Saccidananda), a Kazakh devotee now living in Vrindavan, rather than more conservative and recognizable versions by other ISKCON artists. Likewise, I found myself particularly struck by the choice to include Arjuna’s Grief, a tempera work by Vlad Holst (Vasupriya) of Russia. The painting seems to capture the warrior’s melancholy and despair in a way wholly unlike the renderings usually included in BBT editions of the Bhagavad Gita. A possible result of these curatorial choices: readers already familiar with these narratives are invited to draw in nearer and gain new insights.

Accompanying each painting, and truly holding the book together, is the writing. Co-authors Steven Rosen (Satyaraja Das) and Kaisori Bellach do a remarkable job. Rosen, an independent scholar who studied visual art as an undergraduate, clearly draws on both his keen eye for the artistic and his deep knowledge of the texts underlying each piece. Bellach is a wordsmith highly regarded as one of ISKCON’s most capable editors, and similarly brings her vast understanding of Vaisnava texts and cultural expression to bear in her treatment here. Moreover, one senses that as a member of the Bhaktivedanta Book Trust she carries an intimate knowledge of the paintings in their original contexts.

Their partnership seems to result in a smooth narrative flow, articulated in a consistent and pleasant voice. The prose is well-informed and informative—thoughtful and intellectually stimulating while steering clear of pretention, dryness, or pedantry. Most importantly, Rosen and Bellach master the role of curator-writers. The explanations compliment and enhance the appreciation of each painting without getting in the way of the intimate visual exchange between painting and viewer. A mentioning of the verdant backdrop to Maitreya’s instruction to Vidura; a gentle suggestion that the ray of light illumining Diti’s face foretells the future birth of Prahlad; a short note on the significance of the corpses strewn about the background of a battleground scene. Rosen and Bellach remind us that the narratives’ subtleties unlock greater appreciation for the painting and that the painting’s interpretive choices also enrich our grasp of the stories. They point to, and model, a beautifully cyclical relationship between text and image.

Special mention should also be made of Rosen’s introduction to the volume. In hardly a dozen pages, he manages to contextualize the book’s collection in terms of the path of bhakti, the complex theology of rasa aesthetics, and historical overviews of spirituality in art in eastern and western traditions. Perhaps most impressive is Rosen’s innovative assessment of art as a depiction of divinity in its manifestation as Brahman (abstraction beyond form), Paramatma (the sacred pervading nature), and Bhagavan (God as an approachable relational being). “All artists attempting to depict divinity,” Rosen boldly suggests, “must choose from one of these three approaches.” As far as I can tell, this is an original insight. It is also incredibly important; scholars will want to more deeply explore his theory, but there are also implications for the practitioner. For instance, bearing Rosen’s idea in mind, a Krishna devotee may re-visit works of art seemingly disconnected from their spiritual life—for instance, Rothko’s Green, Red, on Orange, to use an example that Rosen highlights—and discover a new way of encountering their beloved deity in the experience.

I began this review by appreciating that Avatar Art is, in some ways, many books condensed in one. I might amend that statement by acknowledging that there are always limits to how much can be accomplished through one book. When I first heard about Avatar Art, I was excited about the possibility that the book might examine the complexities underlying the development of the “ISKCON style” of art. How exactly did this style come about, and how did it continue to re-invent and refine itself throughout the movement’s first half-century of existence? What were its influences, and how did those influences coalesce in some instances and clash in others? In this respect, I found myself somewhat disappointed by Avatar Art. Apart from a well crafted but too-brief overview tucked into the introduction, the book does not explore the historical trajectory of art and artists in ISKCON. The introduction states, almost parenthetically, that the artists featured in the book are all from non-Indian backgrounds. Rosen suggests that this testifies to bhakti’s non-sectarian, transcendent nature. I’m not sure I fully agree, and would have liked to see some acknowledgement of the tensions and problematics at play in marrying cultural expressions and art forms—particularly in the context of post-colonial concerns about orientalism and cultural appropriation.

In any event, Rosen and Bellach are to be commended. The book is a must for artists and lovers of art—within or outside of the movement—and for all who want to fully appreciate the visual beauty of Krishna Consciousness. It evinces a beautiful foray into an aspect of the Krishna movement that is rarely explored—its art. As the number of scholar-practitioners increases, more academic works on different facets of Vaishnavism will emerge. I hope that some enterprising young scholars—of art or religion or both—might take on the project of thoughtfully and critically examining the stories behind the story of ISKCON art. When they do, Avatar Art will also prove an invaluable resource.