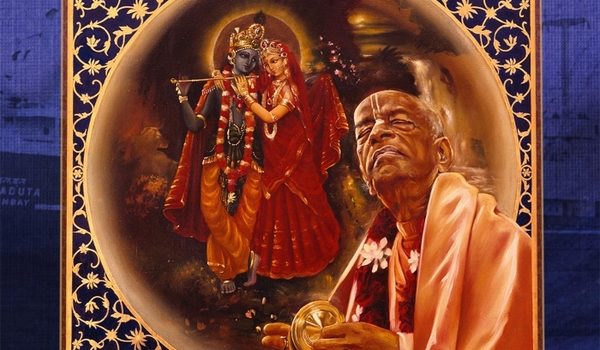 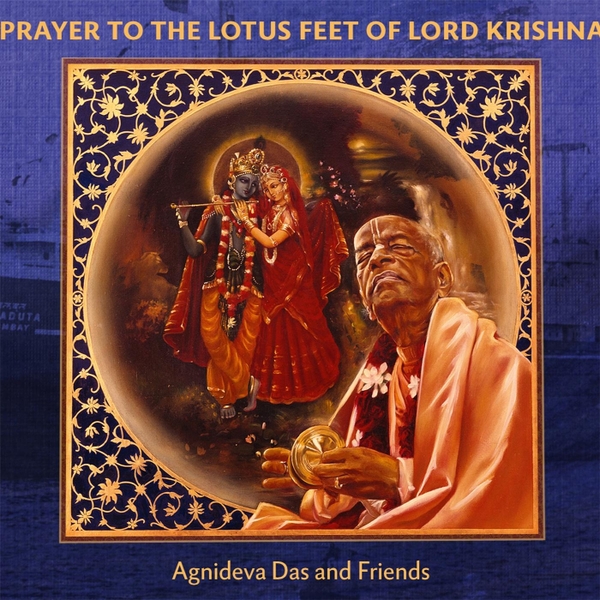 By Swami B.A. Ashrama. Prayer to the Lotus Feet of Lord Krishna is available for purchase from the Krishna.com store and for download from the usual sites, such as Amazon, iTunes, cdbaby, and Spotify.

For those of us who love Agnideva prabhu and his kirtana, it has been far too long since his last album. Tracks from his previous albums and recordings from kirtana festivals around the world have circulated so widely, and for so long, that generations of devotees seem to identify specific tunes with Agnideva himself. We hear the evidence of this during live kirtanas, as Agnideva segues to another “classic Agni tune,” and the devotees cheer. These melodies are what most second-generation devotees grew up with, as their parents played them in the kitchen, in the car, and at bedtime, in a kirtana mela. And wherever Agnideva has gone the last few years, devotees have asked about his next album. And Agni has responded by smilingly assuring them, “We’re working on it.”

And now, at last, it’s here, in the form of Prayer to the Lotus Feet of Lord Krishna. Agnideva conceived of this album as an offering to our beloved spiritual master, His Divine Grace A. C. Bhaktivedanta Swami Prabhupada, to commemorate the 50th anniversary of his establishing the International Society for Krishna Consciousness. This is a collection of six bhajanas, some long familiar to those of us who have chanted with Agni over the years, and some with which he has made the world more familiar somewhat recently.

The first, “Song of Surrender: Emona Durmati,” is one of the songs we’ve all heard Agnideva sing so long we may identify it with him. It’s utterly humble celebration of the sadhaka’s good fortune at having been found by one of Lord Caitanya’s dear servants, together with Agni’s voice, at once plaintive and celebratory, makes it the perfect opening for this offering to Srila Prabhupada.

“The Process of Surrender,” an introductory song to Bhaktivinoda Thakura’s Saranagati collection, may only be familiar here and there, but I was happy to hear Agni include it as if embracing the good fortune recognized in the previous song. Adding to my own enjoyment is the sweet, lively tune that he and I have sung together countless times, capped with a Hare Krsna kirtana led by Amala Harinama.

I found myself quite delighted by the tune for “The Glorious Names of Lord Caitanya: Kali Kukkura.” This is a nama kirtana glorifying Sri Caitanya Mahaprabhu, one which Agnideva and I have sung together for many years. Although I sing this bhajana frequently, this beautiful tune is new to me, and it seems to give the song new life. And again we find ourselves treated to a Hare Krsna kirtana led by Amala Harinama.

This collection gets sweeter still with another selection from Bhaktivinoda Thakura’s Saranagati. “Confidence in the Lord’s Protection: Atma Samarpane,” illustrates, as the title tells us, the surrendered devotees’ conviction that Krsna will protect them in all circumstances. I have long wondered what would be just the right tune for this song, which shows the Lord protecting his devotees in many of his pastimes in Vraja. The lively tune Agnideva shares with us here is just what I have been seeking, and I can easily see Krsna’s cowherd friends confidently walking into Aghasura’s mouth as I sing along with Agni and his friends.

The centerpiece, the crown jewel of this album is the title track, “Prayer to the Lotus Feet of Lord Krishna: Krsna Tava Punya Habe Bhai.”  Agnideva admits in his liner notes that this song is particularly dear to him. Our spiritual master, His Divine Grace A. C. Bhaktivedanta Swami Prabhupada wrote this poem aboard the Jaladuta while crossing the Atlantic ocean on his way to America in September 1965. Srila Prabhupada noted this in his diary: “Today I have disclosed my mind to my companion Lord Sri Krishna.” In so disclosing his mind, he expresses his utter dependence on the Lord’s mercy for fulfilling the task inherited from his own guru of transplanting the teachings of Lord Caitanya to the West and spreading them worldwide. When Agni discusses this poem, he also shares his insight into the intimate relationship it shows between the Lord and Srila Prabhupada, who knows that, whereas everyone is interested in attaining Krishna’s mercy, Krishna desires Radharani’s mercy. This awareness frames Srila Prabhupada’s unique appeal for Krishna’s personal intervention, which Srila Prabhupada felt would alone ensure his success. Agnideva has consistently shared his appreciation for this poem with devotees he has led in kirtan over the last few years, highlighting Srila Prabhupada’s mood of dependence on his dear friend Krishna. And when Agni sings this prayer, he shares his own appreciation for Srila Prabhupada’s surrender with full voice and heart.

Agnideva wraps up this package of sweets with Narottama Das Thakura’s “Radha Krishna Prana Mora,” a simple, sweet, intense meditation on longing for direct service to the Divine Couple, the pinnacle of Gaudiya Vaisnava aspiration. This piece strikes me as an appropriate bookend to Emona Durmati, demonstrating as it does the high end of essential Krsna bhakti.

Srila Prabhupada has sometimes said that bhajan means becoming mad after serving Krsna. We find that kind of bhajan here, that seeking Krsna’s service, in an infectious form in Agni’s heart and voice. Who wouldn’t want to catch that bug? I’m grateful to Agni, and to Jahnavi-jivana, Amala Harinama, and the others who worked on this album to bring this new strain of the bhakti bug into our lives. I find it hard to imagine a collection of devotional music that does not have two copies of Agnideva’s Prayer to the Lotus Feet of Lord Krishna: one for the home and one for the car. And we should encourage each other to buy a copy for a friend, so we inundate the devotional world with this album. Perhaps this will encourage him to start considering his next.