Kala-Krsna Dasa and the Mercy of the Vaishnavas 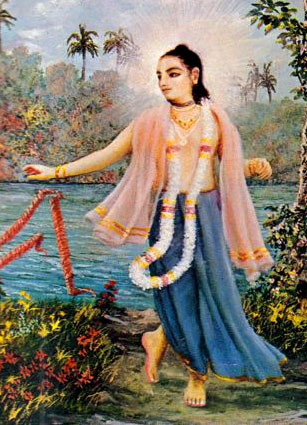 Kala-Krsna dasa was accompanying Mahaprabhu on his journey in South India, and there he did something wrong: he left Mahaprabhu’s personal association, being enticed by the Bhattatharis, the gypsy women. This occurred in south Kerala, Karnataka, the place of Madhvacarya. The people of that province, both men and women, are reputed to be very beautiful. Their complexion is very good, as well as their features and their figures; Gandhi referred to that place as the ‘land of the fairies’. Kala-Krsna dasa was enticed, and left Mahaprabhu’s association.

That even in the direct company of Mahaprabhu, Kala-Krsna dasa deviated from him, he could be taken away, is certainly also for our instruction. But utilizing his special power, Mahaprabhu rescued Kala-Krsna dasa from the gypsies’ camp, and later, after taking him to Jagannath Puri, Mahaprabhu released him from his service saying, “He is of such nature; but, anyhow, I have taken him from the hands of those villifiers. Now I release him, he may go anywhere.” At this point Nityananda Prabhu utilized Kala-Krsna dasa, He again gave him service: “Go to Saci devi and inform her that Mahaprabhu has arrived in Puri safely after two years tour in the South. Give this news to Saci devi.” Despite Mahaprabhu’s rejection, still Kala-Krsna dasa was utilized, by Nityananda Prabhu.

When I was preaching in Madras there was a similar case that I can remember. Myself and Hayagriva brahmacari ( later he became Sripad Madhava Maharaj) were preaching there, and we sent one boy to the Madras Center of Gaudiya Matha. He was staying there and serving, as a brahmacari, but then he became misguided. Sripad B.P. Tirtha Maharaj, who was at that time quite elderly, was in charge of the math there, and he punished that fallen brahmacari by ousting him, sending him away from the math.

He managed to stay in some other place in the city. Then, after Sripad Tirtha Maharaj had left Madras, that boy came to Hayagriva and myself, pleading, “You please give permission, let me stay in the math.” We told him that “Guru Maharaja is coming here very soon; at that time, you come…” Then when Guru Maharaja came, to officially open the new lecture hall, we put the case to him: “This boy came for service, but then he had to leave, for such a reason; but again now he wants to stay in the math. We have told him, ‘Guru Maharaja is coming, and you come at that time’; now, he has come, what to do with him?”

Then our Guru Maharaja, Srila Bhaktisiddhanta Saraswati Thakura, said: “Mahaprabhu did not take Kala-Krsna dasa after he was seduced by the Bhattatharis’. So, I can’t accept him. But Nityananda Prabhu kept him, and gave him engagement. So you should keep him.” A peculiar position we then found ourselves in! I thought, “Gurudev, you are all-in-all our leader, our unconditional Lord; you can’t accept him, then how can we give him shelter, being under your guidance?” That was a puzzle: “How can we do it? If you can’t accept, then how can we?” But Guru Maharaja has said, “I can’t accept him; but you should keep him….” And we had to adjust with that.

From this we can trace the line of benevolence and causeless mercy. The line of causeless mercy is extending from the center, but the extension gets the more intense position. “Go to see the mercy department, take yourself there; perhaps, there is some arrangement to help, to accept you.” Just as in a hospital, the general department disappoints the patient: “No, we can’t accept such patients as you here, but, you may try the other department. There, you will find more accommodation.” And after going there and checking, the patient finds them to be of such type: “Here we can accept all. There is arrangement for you.” In this way we find the servants are more benevolent, more even than their Lord. It is inconceivable.

In seeing the mood of humility as expressed in different ways by Krsnadasa Kaviraja Goswami and Vrndavana dasa Thakura, I also came to some revolutionary understanding about this.

While writing Sri Caitanya-caritamrta, Kaviraja Goswami has expressed so much humility, humility of such a degree, that he says, “My position is the worst; I am a sinner far worse than Jagai and Madhai, I am lower than the worm in the stool. If anyone hears my name, his merit will be diminished; and if anyone speaks my name, he commits sin such kind of wretched person I am. But the grace of Nityananda Prabhu has taken me up from such a nasty pit, taken me to Rupa-Sanatana, to Raghunatha das, and to divine Vrindavan.

I should not proclaim this, I should not speak in such a way, that “I have got something” but if I do not say so, then it will show ingratitude to Nityananda Prabhu, I would be a traitor to him. So I shall have to say, to admit, ‘I have got something,’ and that is by the grace of Nityananda. It is all his property, his grace, otherwise there is nothing, no worth at all in me.” With so much humility Kaviraja Goswami is approaching the public and appealing to them to come to Gaura-Nityananda.

But Vrindavana dasa Thakura, in his writing, says, “I appeal most fervently and with the greatest humility to you all: accept Nityananda and Sri Gauranga! You’ll get the best benefit of your life. This I urgently beg you, with the utmost humility, with a straw between my teeth. But if such appeal of mine fails, and if still you want to put blame on Nityananda-Gauranga, then I just kick you! I kick such a person, demoniac person.”

If in spite of hearing the glories of Nityananda, one blasphemes him, then I kick the head of such a sinful person.

Guru Maharaja explained, “Vrindavana Thakura has pronounced such a bold expression against those unbelieving persons to wound their feelings, so that Krishna will come to their aid. Just as, if any attendant or son of a gentleman does wrong to some other person, then that person’s guardians will come to help their dependent: “Oh, what he has done to you, don’t mind it; look here, I am giving something to you be pleased, and go on, happily…”