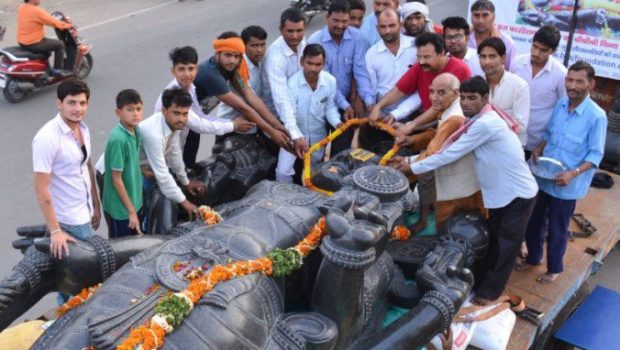 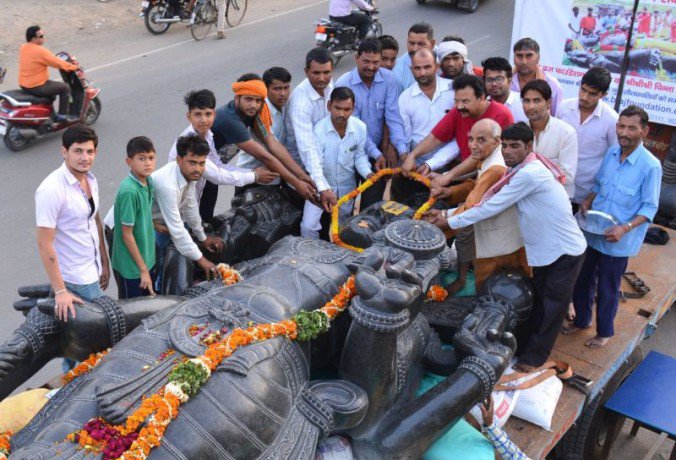 A massive deity of Shri Sankarshan Bhagwan (a form of Dauji Maharaj) is being installed at Sankarshan Kund in Govardhan.

The beautiful black deity was sculpted in Tirupati, in South India. A team of 22 artisans worked for over a year, sculpting the deity from a single block of black stone. It is 28 feet long and weighs 25 tons.

The deity of Sankarshan Bhagwan has made a highly-publicized eight-day journey by land from Tirupati to Govardhan via Hyderabad, Adilabad, Nagpur, Bhopal, Guna, Shivpuri, Gwalior, Agra and Mathura. Saints of Braj and Senior Officials of the UP Government are welcoming him at Sankarshan Kund today, where he will be installed in the kund atop a 12-foot high podium made in Jaipur.

Sankarshan Kund is one of the most important kunds (holy lakes) in the Govardhan area. It is named after Sankarshan, a form of Lord Krishna’s elder brother Balram, and the kund is named after him.

For the last fifty years, the kund was in a state of complete disrepair and was being used as a garbage dump for the local municipality. But recently, the Kund was rennovated by the Braj Foundation. The installation of Sankarshan Bhagwan is part of this project.