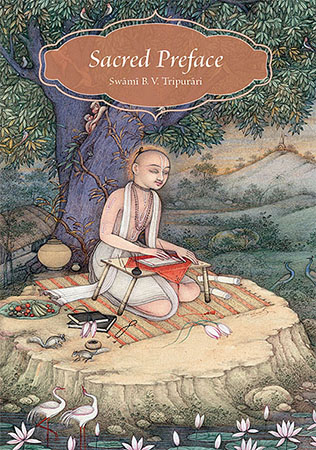 Sri Krsnadasa Kaviraja’s fourteen verse mangalacarana to his classic work Sri Caitanya Caritamrta serves not only as reverential homage to his divine masters and worshipful deity, but as the seed conception containing all the central ideas of Gaudiya theology, metaphysics, and aesthetics that he intends to bring forth in the elaborated text. Exactly how this is so has been clearly, systematically and poetically illuminated by Swami B.V. Tripurari in his latest book, Sacred Preface.

The interpretive voice adopted by Swami Tripurari in elaborating the philosophical ideas implicit in Kaviraja’s invocation serves two key functions—for the specialist and practitioner of the path, it makes evident the essential truths of Gaudiya Vaisnavism, providing the key to how they fit together to disclose the mystery concealed within Kaviraja’s linguistic code; and for the objective philosophical inquirer, it discusses the transrational reality in terms that allow for its consideration not only in regard to being and awareness but even more significantly, in regard to and as “aesthetic rapture.” This direction impels the impartial wisdom seeker to reconsider nondual consciousness as that which transcends not only conventional name and form but all ideas of namelessness and formlessness. What is hinted at could perhaps be described as “post-nondual metaphysics” or “the transrational accommodation of plurality within the nondual whole.”

Swami Tripurari begins to unravel this enlarged view of nondual reality in Chapter Three in the objective analysis of the Absolute in terms of being (sat), consciousness (cit), and love (ananda), demonstrating that love both includes and transcends being and consciousness. His examination of the nature of consciousness from the modern field of consciousness studies not only grounds the discussion in objective philosophical terms but also induces the practitioner to push beyond traditional conventional belief, to apprehend the deity immediately in and as consciousness. This analytical approach from a modern perspective is thus shown to be imperative not only for objective inquiry but for assimilation of the truth implicit within the path here and now, in terms that are relevant to present experience and life view. Without this revitalization of perspective, practice often becomes but an imitative reenactment or grasping at a shifting context that obscures rather than discloses the truth for which it served as original support.

The “post-nondual” conception of the Absolute could be said to be elucidated by Swami particularly in Chapters four to six, in which we are first acquainted with the exoteric reason for the Absolute’s descent from the “supersubjective realm” into the world of our objective experience. Delving progressively inward into the esoteric realm of the Absolute’s own interiority, we encounter it both as the ultimate object of love and as its ecstatic ground and receptacle. This investigation attains its most feverish pitch in Swami’s consideration of “the Godhead in existential crisis.” Such a condition, which is made possible only by acknowledging the nondual reality as of the nature of love and ecstatic rapture, propels the sympathetic reader into the dimension of the transrational, beyond being and nonbeing. Here we must abandon all ideas of the nondual as merely, “not one, not two.”

Throughout the book Swami Tripurari has given much attention to the elaboration of the fivefold expression of divinity as the thread that supports and weaves together the entire discussion, in accordance with Krsnadasa Kaviraja’s inceptive verse. Swami’s pinpointing of these five aspects as the supersubjective reality, the ground of the supersubjective, its compassionate descent into the objective realm, its energetic embodiment as divine love, and its manifestation as the conscious living beings who are invited to participate in such love, lucidly and succinctly demonstrates the nature of the Absolute in its utter completion. In conclusion, it may be stated simply that Swami’s Sacred Preface serves as a compelling commentary on Krsnadasa Kaviraja’s mangalacarana to Sri Caitanya Caritamrta that carries tremendous significance both for contemporary practitioners and for the extended investigation into the nature of truth that interfaces with modern fields of inquiry.