Review: In Search of the Highest Truth: Adventures in Yoga Philosophy 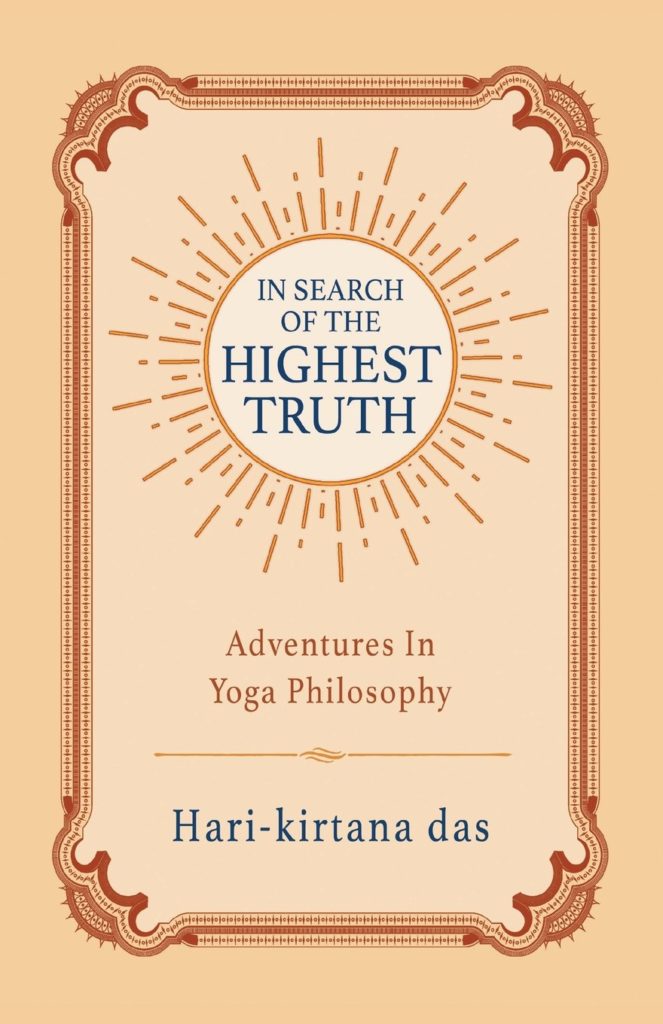 During the last fifteen years or so, several Western Gaudiya Vaisnavas have used their knowledge of Indian philosophy to approach the rapidly growing Yoga scene, whether to spread “bhakti yoga” among an audience already somewhat familiar or at least favorably predisposed towards Vedanta, to make a living as lecturers, or by some combination thereof.

However, this is not the easiest of tasks. While the yoga world indeed often is favorably disposed towards any form of Indian spirituality, it does not always connect seamlessly with Gaudiya Vaisnavism. Its emphasis on eclecticism, inner-worldly well-being, beauty and above all, the primacy of personal experience, can make it difficult for Gaudiya Vaisnavas to resist watering down the message of Caitanyadeva in order to not seem like some kind of weird fundamentalists. This is particularly the case with writing: a talented and charismatic speaker can present some aspect to Gaudiya Vaisnavism in an appealing way to any audience, but when a member of that audience asks for a book with more information, the speaker may be at a loss.

There are of course already some books presenting Gaudiya Vaisnavism to a modern, spiritually inclined audience. Sripada Radhanatha Swami’s The Journey Home and The Journey Within are probably the best-known ones, but these books are not directly intended towards a yoga audience. Jayananda Dasa’s (Janne Kontala’s) Inner Yoga: Entering the Heart of the Tradition is an excellent example of an accomplished Vaisnava reaching out to the yoga community; in no little measure due to its author being a very experienced postural yogi as well. Unfortunately, this book is not very well-known outside of Northern Europe.

It is thus with great interest that I have read Hari-kirtana das’ book on yoga philosophy. As the author writes in the preface, he wants to present the philosophy of the Bhagavad-gita and the Yoga-sutra in a way that would “combine theory with practice on personal and social levels written in a style that is both conversational and reflective.”

In keeping with the conversational style that he has promised, the author presents most of the text as dialogues between himself and students, using a delightfully light and casual tone of language, familiar from many North American spiritual authors, though including perhaps more Sanskrit terms than necessary. The brevity of the text, however, also means that most of the topics covered are not given much depth. Sometimes, this is disappointing: the otherwise excellent chapter on the five functions of yoga philosophy would have benefitted from a more thorough discussion (perhaps functioning as the framework for the whole book?). Usually, though, the chapters function as conveniently tasty and bite-sized introductions to interesting topics.

A bigger disappointment, though, is that the practical element the author promised turns out to be very meager. When it comes to personal practice, we learn nothing more than that we should be vegetarians – incredibly enough, not even about mantra meditation or how to combine a committed asana practice with work and family. What is that bhakti really in practical terms? Societally speaking, there is a chapter on varna, but that topic is presented in such a rarified way, that it has little connection to the world around us today. Vedic kings, anyone? Does yoga philosophy really have nothing to say about the actual social questions people debate today?

Thankfully, on the philosophical level, the book is much better. One of its most important points is given right at the beginning and repeated throughout. Rather than looking at traditional yoga through a postmodern lens, the author argues, we should do the opposite (p. xv):

On the other hand, if we look at the modern world through the lens of traditional yoga philosophy, something amazing happens: the bend of the lens reveals secrets that were hiding in plain sight, clarifies the blur of a seemingly irrational world, and suggests ways to think about our lives that never would have occurred to us otherwise.

This is exciting proposition the authors sets out to fulfill by his overview of the philosophy of the Gita (yes, he does refer to the Yoga-sutra at times, but that text clearly plays a secondary role).

In chronological order, the topics covered are you are not the body (repeated several times throughout), the gunas, the makeup of the internal body, the nature of atman, the function of faith, why do we exist?, yoga and religion, the three aspects of divinity (Brahman, Paramatma and Bhagavan), the evolution of Vedic thought up to the teachings of Sri Caitanya (including a mention of the Mahamantra), the relationship between yoga and Hinduism, five functions of yoga philosophy, varna-dharma, teachers and gurus, what is good? (including arguments for vegetarianism), destiny and free will (the law of karma), samsara and bhakti, consciousness and matter (including why Advaita Vedanta is wrong) and finally, the supreme person (Purusottama).

Most of these topics belong to the standard ISKCON repertoire, but they are presented here with much humor and wit, and often with reflection as well – and often to challenge preconceived opinions of what “Yoga philosophy” should be. There are some mistakes and weaknesses here as well. Translating “astanga-yoga” as “the yoga of eightfold mysticism” is hardly helpful in understanding what that means (p. xviii); most of the 108 Upanisads are not at all lost (p. 56), in fact, there are many more extant today; the nominative of “bhagavat” is not “bhagavan” and no, “blessed” is not a verb (p. 57), and despite what the Internet tells you, Emperor Justinian did not ban the doctrine of transmigration of the soul in 553 CE. Nevertheless, there is much that is excellent here, such as the final chapter’s presentation of the supreme person or the sustained discussion about the importance of faith in the first chapters.

In sum, this volume shows how a popularized version of Gaudiya Vaisnavism can indeed engage meaningfully with the modern yoga community, so as to offer new perspectives on important issues of spirituality and philosophy. And perhaps more importantly: while a graying middle-aged scholar such as I may pick out faults here and there, this is a book that is genuinely fun to read, one that interested people will not buy out of obligation just to keep on the shelf but actually read and engage with. What could be better than that?