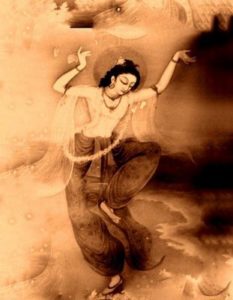 Mahaprabhu’s humility arises amid unbearable feelings of separation from Krishna, as he begins to taste Radha’s prema. This verse of Siksastakam represents Mahaprabhu’s actual condition in Puri-dhama during his antya-lila, whereas all the previous verses are spoken in the mood of a sadhaka or bhava-bhakta for the sake of teaching others. In his antya-lila in Jagannatha Puri, Gaura Raya has been called vipralambha-murti, “the form of love in separation,” because he suffered so much in separation from Krishna and thus taught the world about the inner life of bhajana. The merciful Bhaktisiddhanta Saraswati Thakura writes in his Vivrtti commentary on Siksastakam that the confidential secret of Gauranga’s lila is that when Krishna adopts the sentiment of a devotee as Gaurahari, he is situated in feelings of separation, vipralambha. Union (sambhoga) is achieved by first passing through separation. To demonstrate this, Sri Krishna manifests his eternal Gaura svarupa, which is the incarnation of vipralambha.

Thakura Bhaktivinoda emphasizes meditating on lilas involving purva-raga or pravasa in the cultivation of prema, as Mahaprabhu does in this verse of Siksastakam. However, he also points out that devotees who have attained prema but have not yet left this world and taken birth in Krishna’s prakata-lila are only capable of fully experiencing purva-raga.2 The reason for this is that while purva-raga can be experienced by hearing about Krishna, seeing his picture, or visualizing him in meditation, the other three types of separation fully manifest only after having met Krishna personally and having experienced the intensification of one’s sthayi-bhava that takes place in Krishna’s prakata-lila.

Suffering from the pain of separation, Mahaprabhu assumed the mood of Radha and shared his feelings with Rama Raya and Svarupa Damodara:

In my suffering, the days seem to never pass. Each moment is as long as an age. Tears pour out of my eyes as though they were monsoon clouds. The three worlds have become void in Govinda’s absence. I burn in the fire of separation, yet I cannot die.3

Although Radha’s life in separation from Krishna is unbearable, she cannot die because she knows that if she were to do so, it would cause Krishna pain. Thus even though he has caused her the unbearable pain of separation, she remains selfless in her love for him. This is the secret of prema. Although Radha’s love for Krishna appears like the lust of a young girl for a young boy, the two are worlds apart. The basic difference between the two is that lust involves the desire to satisfy one’s own senses, whereas prema involves the desire to satisfy Krishna’s senses.

In his Gitavali, Thakura Bhaktivinoda beautifully expresses the spirit of Mahaprabhu’s separation as experienced by one attaining prema through nama-sankirtana:

As I sang the names of the Lord, different bhavas began to awaken within me. I saw Krishna standing on the bank of the Yamuna, accompanied by the daughter of King Vrsabhanu. There he stood playing his flute under a kadamba tree, looking like a dancer about to go on stage. When I saw this divine couple, my mind became unsteady and I lost consciousness. I don’t know how long it was, but when I came back to consciousness, I could not see them anymore. O sakhi! How can I go on living? A moment has become a millennium for me.

My eyes are streaming with tears like a downpour in the rainy season and the world has become a void. In Govinda’s absence, my life airs no longer stay within me. Tell me how I can go on living. I have become so anxious. Still, taking shelter of harinama once again, Bhaktivinoda calls out to Radha’s Lord: “Please show yourself to me. Please save me, or I will surely die.”

Although the divine ocean of prema vacillates between the low tide of separation and the high tide of union, entrance into prema is only possible through love in separation. It is love in separation that enriches one’s sthayi-bhava and thus makes one competent to fully participate in all aspects of Krishna’s Vraja lila.4

This enrichment takes place after the prema-bhakta leaves this world and takes birth in Sri Krishna’s prakata-lila in the association of the nitya-siddha parikaras of Radha and Krishna. For both Radha’s handmaidens and Krishna’s intimate friends who are involved in his romantic life, this development reaches the exalted state of mahabhava. In this verse the words yugayitam nimesena indicate mahabhava. Because the exalted state of mahabhava is the highest degree of intensification one’s sthayi-bhava can reach, all that comes before it—sneha, mana, pranaya, raga, anuraga, and bhava—is also implied in this verse. Mahabhava is characterized, among other things, by its effect of making one feel a moment (nimesa) in separation to be like a millennium (yuga) and a millennium in union to be like a moment. Srimad-Bhagavatam describes mahabhava thus:

No male or female in Vrindavana who tasted the festival of the eyes in the form of Krishna’s beautiful face, with its playful smile and cheeks adorned with dolphin-shaped earrings, was satisfied. Although they all felt happiness, it was mixed with frustration due to the momentary blinking of their eyes.5

This verse shows how, among the Vrajavasis, the gopis and Krishna’s priya-narma-sakhas experience Krishna’s beauty most intensely.…Unable to tolerate even the interruption that comes from blinking, they become angry. This is one of the signs of the highest love—mahabhava—which is found only in the gopis and nowhere else except perhaps in Krishna’s most intimate companions like Subala.6

In Gaura’s separation, one moment—the blink of an eye—felt like a millennium. Such is the nature of distress. While joy passes all too soon, distress drags on as if forever. The word yuga means a millennium. In the grief of separation from Govinda (govinda-viraha), one moment turns into a millennium. However, yuga is also sometimes defined as “twelve years.” Mahaprabhu spent the last twelve years of his acarya-lila in Jagannatha Puri experiencing Radha’s love for Krishna, her unbearable pain of separation, and in doing so he taught his followers how to taste this same love. The only hope for one whose heart is heavy in separation’s grip is to pour forth a torrent of tears. Here Mahaprabhu compares his tears, which were comparatively slight in bhava-bhakti, to a torrential downpour, caksusa pravrsayitam. In this condition he saw the world as vacant. Without Govinda the world held no charm for him.

What then is the value of Mahaprabhu’s pain of separation? While on the outside the effects of prema appear like poison, on the inside they are filled with ananda.7 Although the ocean of Gaura’s love caused him suffering in its low tide of separation, his love in separation on the shores of Jagannatha Puri made the ocean of love for Krishna accessible to all. As he entered that ocean in low tide, so shall we—following his example through love in separation—and in so doing taste, as he did, the high tide of union discussed in the final stanza of Siksastakam.