The Role of Repetition 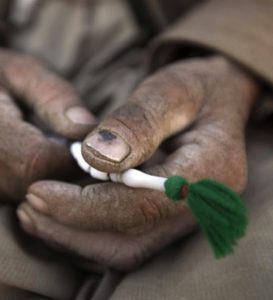 Spiritual training involves scrubbing out deeply ingrained habits, which takes time and reiter­ation. It is like trying to flatten a scroll that has been coiled for thousands of years. One pass of our hands across the surface won’t do it. We have to press it out again and again.

Accomplishment in any discipline involves repetition. If we want to build muscles, we don’t lift ten thousand pounds at one time; we lift a few pounds thousands of times. Just as repetition is the source of necessary hardship for a piano student aspiring to be a concert pianist, it remains so for spiritual students aspiring to wake up. We hear the same teachings continuously, we practice the same mantras ceaselessly, we return to the meditation cushion, and then to our breath, incessantly. In the Tibetan tradition, one does one hundred thousand prostrations, one hundred thousand mantra recitations, one hundred thousand mandala offerings, one million guru yoga recitations—and that’s just for starters. These may seem like outrageous numbers, but they are nothing compared to the numbers we have already accumulated in our practice of materialism.

I have had selfish thoughts millions of times, bragged about myself, criticized others, gossiped, cheated, lied, and practiced self-centered actions millions upon millions of times. I have been mindless billions of time. I have forgotten the truth countless times. The numbers are astronomical, and so is the sphere of their influence.

Now when my teacher tells me I have to recite one million mantras that cultivate compassion, I know why. He is not torturing me, even though it sometimes feels that way. He is simply using the universal laws of reality, the same ones that I have unconsciously used to get me so stuck, to now consciously get me unstuck.

The spiritual path is hard because we are stopping old habits that come so easily and replacing them with difficult new ones. For example, mindlessness is natural to us. It is easy to space out and be distracted. Try to look at an object without wavering for a few seconds and you will see your talents for distraction. This is a bad habit, formulated over countless repetitions, and is a central unconscious practice on the worldly path. It is no longer even a practice, but a constant performance. We have accomplished mindlessness.

On the spiritual path, we want to replace this bad habit with a good one. Even though mindfulness is a natural expression of the awakened mind, it has been buried under eons of mindlessness, so we have to work to dig it out. The initial stage of mindfulness practice is called deliberate mindfulness because it takes effort to bring our wandering minds back. It is difficult only because it is unfamiliar.

One sign of progress on the path is that deliberate mindfulness evolves into spontaneous mindfulness. With enough practice, it becomes effortless. We have formed a good habit, even if we did not have a good time doing it.

The path is full of magic, but it is also full of mechanics. The skill of a concert pianist is magical, but this skill is the result of causes that are painfully mechanical. Similarly, the skill of effortless mindfulness is magical, but its causes are equally mechanical. There is nothing glamorous about the hard work of repetition. Understanding the mechanics of spiritual development dispels illusions about the ease of accomplishing it.

Science speaks about phase transformations or punctuated equilibrium. A common example is the manner in which water comes to a boil. Put a pot of water on the stove, turn on the heat, and wait. Depending on the intensity of the heat and the temperature and volume of the water, it will boil slowly or quickly, but either way there is a period when nothing seems to be happening. All the energy is going into the water with no obvious result. The phase transformation from water into steam takes time.

Similarly, when we engage in spiritual practice, we have placed ourselves on the stove and turned on the heat. If our practice is halfhearted, then it takes time for that low temperature to transform us. If we practice wholeheartedly, the higher temperature brings us more rapidly to a boil. Either way, there is a period when nothing seems to be happening. Lots of energy is going into our practice, but nothing is cooking.

As long-term practitioners reflect over years of practice, they discover they are starting to get warm. The changes come slowly because the water that is being heated is so cold, and the heart of our practice is usually tepid. But sooner or later we come to a boil. After years of practice we “suddenly” transform from an uptight, aloof person into an open, loving one; from a confused sentient being into an awakened one.

Lasting spiritual changes arise from simply being present, again and again. Religion means to link (ligio) back (re). Linking back on the spiritual path takes place every time we return to our breath, our body, our mantra, or the present moment. With each return we are taking a small step toward enlightenment because being fully present is a fundamental expression of enlightenment.

This article was originally published at Utne, and is reproduced here [without] the permission of the author, who is not affiliated with this website or its views.

4 Responses to The Role of Repetition