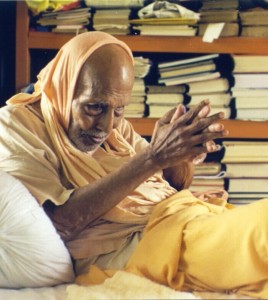 Srila Prabhupada Sri Bhaktisiddhanta Saraswati Thakura spread Sri-Bhaktisiddhanta-vani (his message) extensively all over the world in a very short time. In doing so, he accepted some great personalities as his associates, through whom he spread his message. One of his chief associates is our siksa guru, Param Pujyapada Parivrajakacarya Tridandi Swami Srimad Bhakti Pramode Puri Goswami Maharaja. We have heard that when Srila Prabhupada was manifested in this world, Param Pujyapada Srila Puri Goswami Maharaja, whose name was then Srimad Pranavananda Brahmacari Prabhu, was like his right hand in beating his brhad-mrdanga, or big drum—in other words, book publication. On the instruction of Srila Prabhupada, he edited the weekly Gaudiya Patrika, the daily Nadiya Prakas, and many other spiritual books published by the matha. He helped to edit, proofread, publish and print books and magazines with great expertise and hard work. He was given the position of the editor because of his own qualifications. Having been born in the highest brahmana family, and possessing unparalleled scholarship, he is always prideless and humble. He expresses his humble mood to all Vaishnavas, advanced or neophyte. In worshipping the deities, installing deities according to scriptural injunctions, establishing temples, performing funeral rites, and so forth, his care, discipline and expertise are extraordinary. We have not seen him in his brahmacari state. After he had taken sannyasa, when he was famous as Tridandi-yati Srimad Bhakti Pramode Puri Goswami Maharaja—that is when we came to see him. We have had the good fortune of hearing his nectarean Hari-katha that is immersed in the mood of divine love. He speaks Hari-katha incessantly, and in festivals and in meetings, he used to sing kirtan in an extremely melodious voice. Even now, in his old age, without considering his own health, the way he worships the Deities, delivers Hari-katha, helps publish books and articles, and observes Vaishnava festivals with great care and regulation, is a source of inspiration and instruction for us.

“Our Guru Maharaja [Param Pujyapada Srila Bhakti Dayita Madhava Maharaja] always showered [Srila Puri Maharaja] with profound respect as his elder Godbrother. Srimad Puri Goswami Maharaja was so closely connected with Sri Chaitanya Gaudiya Maṭh that he always accompanied Guru Maharaja at all the programs of the matha at all places. Once, when Srila Puri Maharaja was at Sri Purusottama Dhama [Sri Jagannatha Puri] with Srila Guru Maharaja during the Ratha-yatra festival, I was astonished to see him chanting the entire Ratha-yatra chapter from Sri Caitanya-caritamrta continuously from the Jagannath temple all the way to Gundica. His performing Vraja-mandal parikrama on foot by holding the shoulder of a devotee at the age of eighty-five is certainly unique. When I first joined Sri Gaudiya Maṭh institution [in 1947], I had the opportunity to go with Srila Puri Maharaja to different places in West Bengal. I was attracted to hearing his inspiring speeches and his melodious sweet-voiced kirtan. When Srila Guru Maharaja opened his Sri Chaitanya Gaudiya Math at 86A Ras-bihari Avenue, Calcutta, and subsequently in Mayapura and other places of India, Srila Puri Maharaja joined him and dedicated himself to helping him to preach Mahaprabhu’s message in every possible way. By the request of Srila Guru Maharaja, he became the editor of Sri Chaitanya Vani magazine, published by Sri Chaitanya Gaudiya Math. After the disappearance of Srila Guru Maharaja, Srila Puri Maharaja has become the shelter of all the devotees of Sri Chaitanya Gaudiya Math as their siksa guru (instructing guru). Whenever we have any questions about any spiritual conclusion, or about the performance of bhajana, we take shelter at his lotus feet for our own benefit. Even though we are incapable of realizing his transcendental identity, just from our external experience we are amazed by his unlimited scholarship and wisdom. Of all the close associates of Srila Prabhupada, he is still manifested here to become a refuge for all the Vaishnavas following Srila Bhaktisiddhanta Saraswati Thakura.