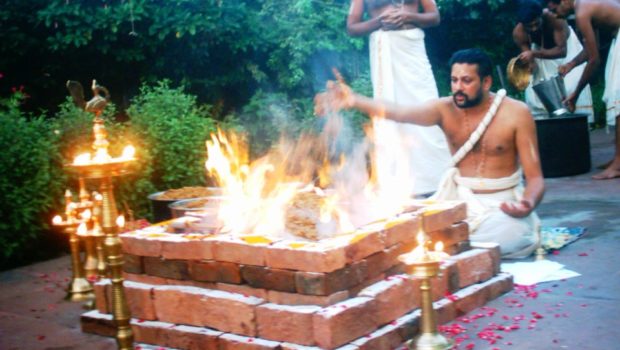 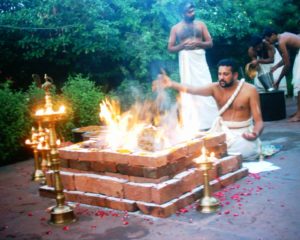 A hundred dhoti-clad young men sat cross-legged on the floor in facing rows, chatting amongst themselves. At a sign from their teacher, the hall went quiet. Then they began the recitation. Without pause or error, entirely from memory, one side of the room intoned one line of the text, then the other side of the room answered with the next line. Bass and baritone voices filled the hall with sonorous prosody, every word distinctly heard, their right arms moving together to mark pitch and accent. The effect was hypnotic–ancient sound reverberating through the room, saturating brain and body. After 20 minutes they halted, in unison. It was just a demonstration. The full recitation of one of India´s most ancient Sanskrit texts, the Shukla Yajurveda, takes six hours.

I spent many years studying and translating Sanskrit and became fascinated by its apparent impact on mind and memory. In India’s ancient learning methods textual memorization is standard: traditional scholars, or pandits, master many different types of Sanskrit poetry and prose texts; and the tradition holds that exactly memorizing and reciting the ancient words and phrases, known as mantras, enhances both memory and thinking.

I had also noticed that the more Sanskrit I studied and translated, the better my verbal memory seemed to become. Fellow students and teachers often remarked on my ability to exactly repeat lecturers’ own sentences when asking them questions in class. Other translators of Sanskrit told me of similar cognitive shifts. So I was curious: was there actually a language-specific “Sanskrit effect” as claimed by the tradition?

When I entered the cognitive neuroscience doctoral program at the University of Trento (Italy) in 2011, I had the opportunity to start investigating this question. India’s Vedic Sanskrit pandits train for years to orally memorize and exactly recite 3,000-year old oral texts ranging from 40,000 to over 100,000 words. We wanted to find out how such intense verbal memory training affects the physical structure of their brains. Through the India-Trento Partnership for Advanced Research (ITPAR), we recruited professional Vedic pandits from several government-sponsored schools in the Delhi region; then we used structural magnetic resonance imaging (MRI) at India’s National Brain Research Center to scan the brains of pandits and controls matched for age, gender, handedness, eye-dominance, and multilingualism.

What we discovered from the structural MRI scanning was remarkable. Numerous regions in the brains of the pandits were dramatically larger than those of controls, with over 10 percent more grey matter across both cerebral hemispheres, and substantial increases in cortical thickness. Although the exact cellular underpinnings of gray matter and cortical thickness measures are still under investigation, increases in these metrics consistently correlate with enhanced cognitive function.

This article was originally published at Scientific American and is partially reproduced here without the permission of the author, who is not affiliated with this website or its views.

7 Responses to The Sanskrit Effect