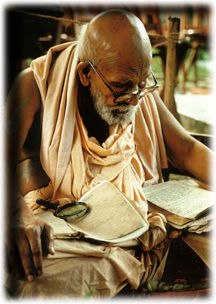 By Srila Bhakti Promode Puri Goswami, an excerpt from Chapter 1 of Art of Sadhana

The word vedanta means “the end result of knowledge.” It is a reference to the Upanishads, the final books of the Vedic revelation or sruti. These books contain the mystic insights of the rshis and are considered to be the basis of all spiritual knowledge in India. Veda-vyasa, the compiler of the Vedic literature, also composed the Vedanta sutras, or Brahma sutras, in order to summarize the teachings of the Upanishads. The word sutra means “aphorism” or “code”, a short, enigmatic statement meant to remind one of an entire aspect of the Upanishadic teaching.

Thus, the Vedanta sutras are the texts which stand as the basis of all religious philosophy in India. Indeed, the founders of every school of Indian philosophy (Sankara, Ramanuja, Vallabha, Vishnuswami, Madhva, and Nimbarka) have all written commentaries or bhasyas on the sutras in order to explain their understanding of the supreme truth. The Gaudiya Vaishnava school founded by Caitanya Mahaprabhu also has an authoritative commentary on this important scripture, the Govinda-bhasya of Baladeva Vidyabhusana. For the Gaudiyas, however, the unblemished commentary on the Vedanta Sutra is the Srimad Bhagavatam, also composed by Vyasadeva, where the three aspects of spiritual knowledge, sambandha, abhidheya and prayojana, are clearly enunciated.

The Vedanta Sutra is divided into four chapters or adhyayas, and each is further subdivided into four padas. The first and second chapters deal with sambandha-tattva, the third with abhidheya-tattva, and the fourth with prayojana.

The first chapter of the Vedanta Sutra is called samanvaya, or “synthesis”, for it organizes all the ideas of the Vedas and the Upanishads into an orderly whole centered around the concept of Brahman, the Supreme Truth. The second chapter is called avirodha, which means “consistency” or “harmony”. According to Baladeva Vidyabhusana, in this chapter, all apparently inconsistent scriptural statements are shown to point harmoniously to the one Brahman, or Supreme Lord (tad evam aviruddhanam srutinam samanvayah sarvesvare siddhah). The third chapter is named sadhana, or the “means.” It discusses devotion, which is the only means for attaining Brahman. The fourth chapter is called phala, or the “result.” The term prayojana, or “ultimate purpose” is also used to indicate the attainment of Brahman.

Sri Caitanya Mahaprabhu made the teachings of the Vedanta more explicit to his disciples and his explanations were mercifully recorded by Krishnadasa Kaviraja Goswami in the Caitanya Caritamrta:

“The Vedic knowledge is subdivided into three parts known as sambandha, abhidheya (procedure), and prayojana (the aim or end). The knowledge of Krishna as the goal of spiritual life is called sambandha. The knowledge that devotion is the means of attaining him and acting accordingly is called abhidheya. The ultimate goal of life, or prayojana, is love of Krishna or prema. This prema is the greatest treasure of spiritual life and is foremost amongst all objectives of human life.” Caitanya Caritamrta, 2.20.124-125

“The Vedic knowledge is subdivided into three parts known as sambandha (relations), abhideya (procedure) and prayojana (the aim). These three great treasures are Krishna, devotion to Krishna, and love for Krishna.”

In the Bhakti-rasamrta-sindhu (1.1.1) Krishna is stated to be the akhila-rasamrta-murti or personification of all twelve aesthetic and relational experiences known as rasa. According to sambandha knowledge, Krishna is the Supreme Truth. The only means to attain him is bhakti or devotion, and love for him is the ultimate objective of spiritual practices.

One Response to Introduction to Vedanta