The Facts About Our Relationship with Facts 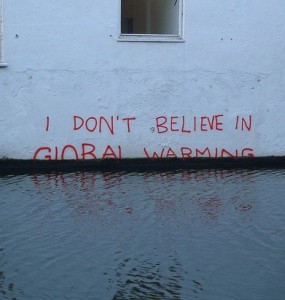 “A man with conviction is a hard man to change. Tell him you disagree and he turns away. Show him facts or figures and he questions your sources. Appeal to logic and he fails to see your point.” So wrote the celebrated Stanford University psychologist Leon Festinger, in a passage that might have been referring to climate change denial—the persistent rejection, on the part of so many Americans today, of what we know about global warming and its human causes. But it was too early for that—this was the 1950s—and Festinger was actually describing a famous case study in psychology.

Festinger and several of his colleagues had infiltrated the Seekers, a small Chicago-area cult whose members thought they were communicating with aliens—including one, “Sananda,” who they believed was the astral incarnation of Jesus Christ. The group was led by Dorothy Martin, a Dianetics devotee who transcribed the interstellar messages through automatic writing.

Through her, the aliens had given the precise date of an Earth-rending cataclysm: December 21, 1954. Some of Martin’s followers quit their jobs and sold their property, expecting to be rescued by a flying saucer when the continent split asunder and a new sea swallowed much of the United States. The disciples even went so far as to remove brassieres and rip zippers out of their trousers—the metal, they believed, would pose a danger on the spacecraft.

Festinger and his team were with the cult when the prophecy failed. First, the “boys upstairs” (as the aliens were sometimes called) did not show up and rescue the Seekers. Then December 21 arrived without incident. It was the moment Festinger had been waiting for: How would people so emotionally invested in a belief system react, now that it had been soundly refuted?

At first, the group struggled for an explanation. But then rationalization set in. A new message arrived, announcing that they’d all been spared at the last minute. Festinger summarized the extraterrestrials’ new pronouncement: “The little group, sitting all night long, had spread so much light that God had saved the world from destruction.” Their willingness to believe in the prophecy had saved Earth from the prophecy!

From that day forward, the Seekers, previously shy of the press and indifferent toward evangelizing, began to proselytize. “Their sense of urgency was enormous,” wrote Festinger. The devastation of all they had believed had made them even more certain of their beliefs.

In the annals of denial, it doesn’t get much more extreme than the Seekers. They lost their jobs, the press mocked them, and there were efforts to keep them away from impressionable young minds. But while Martin’s space cult might lie at the far end of the spectrum of human self-delusion, there’s plenty to go around. And since Festinger’s day, an array of new discoveries in psychology and neuroscience has further demonstrated how our preexisting beliefs, far more than any new facts, can skew our thoughts and even color what we consider our most dispassionate and logical conclusions. This tendency toward so-called “motivated reasoning” helps explain why we find groups so polarized over matters where the evidence is so unequivocal: climate change, vaccines, “death panels,” the birthplace and religion of the president, and much else. It would seem that expecting people to be convinced by the facts flies in the face of, you know, the facts.

The theory of motivated reasoning builds on a key insight of modern neuroscience: reasoning is actually suffused with emotion (or what researchers often call “affect”). Not only are the two inseparable, but our positive or negative feelings about people, things, and ideas arise much more rapidly than our conscious thoughts, in a matter of milliseconds—fast enough to detect with an EEG device, but long before we’re aware of it. That shouldn’t be surprising: Evolution required us to react very quickly to stimuli in our environment. It’s a “basic human survival skill,” explains political scientist Arthur Lupia of the University of Michigan. We push threatening information away; we pull friendly information close. We apply fight-or-flight reflexes not only to predators, but to data itself.

Consider a person who has heard about a scientific discovery that deeply challenges her belief in divine creation—a new hominid, say, that confirms our evolutionary origins. What happens next, explains political scientist Charles Taber of Stony Brook University, is a subconscious negative response to the new information—and that response, in turn, guides the type of memories and associations formed in the conscious mind. “They retrieve thoughts that are consistent with their previous beliefs,” says Taber, “and that will lead them to build an argument and challenge what they’re hearing.”

In other words, when we think we’re reasoning, we may instead be rationalizing. Or to use an analogy offered by University of Virginia psychologist Jonathan Haidt: We may think we’re being scientists, but we’re actually being lawyers. Our “reasoning” is a means to a predetermined end—winning our “case”—and is shot through with biases. They include “confirmation bias,” in which we give greater heed to evidence and arguments that bolster our beliefs, and “disconfirmation bias,” in which we expend disproportionate energy trying to debunk or refute views and arguments that we find uncongenial.

That’s a lot of jargon, but we all understand these mechanisms when it comes to interpersonal relationships. If I don’t want to believe that my spouse is being unfaithful, or that my child is a bully, I can go to great lengths to explain away behavior that seems obvious to everybody else—everybody who isn’t too emotionally invested to accept it, anyway. That’s not to suggest that we aren’t also motivated to perceive the world accurately—we are. Or that we never change our minds—we do. It’s just that we have other important goals besides accuracy—including identity affirmation and protecting one’s sense of self—and often those make us highly resistant to changing our beliefs when the facts say we should.

This article was originally published by Mother Jones, and is partially reproduced here without the permission of the author, who is not affiliated with this website or its views.

12 Responses to The Facts About Our Relationship with Facts