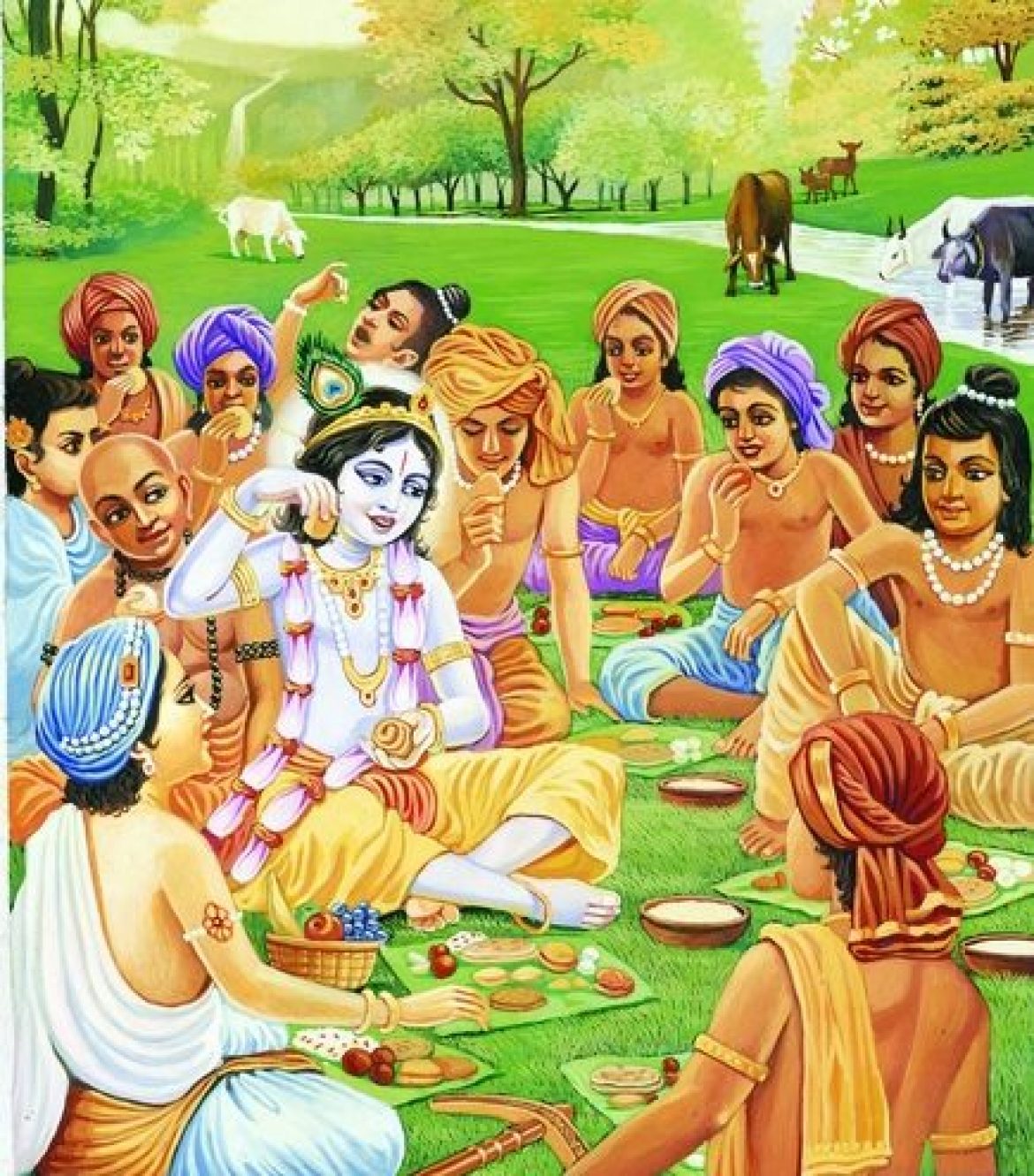 The fifteenth chapter of the Bhagavad-gita is named Purusottama Yoga. As such it is about the most elevated (uttama) person (purusa). This yogic person is Krishna himself, who in some sense is thought to have walked among us. And the highly qualified Vyasa meditated upon Krishna’s Earthly lila and then poeticized, through a mytho-historical narrative, his insight as to its philosophical and theological implications in what could be referred to as the theological sequel to the Gita, Srimad Bhagavatam.

Unlike the story of Christ for Christians, the historicity of Krishna’s Earthly lila is of little concern to his devotees. The intrasubjective effect derived from meditation on his lila speaks with more certainty as to its veracity than any historical proof, which, for that matter, can never escape subjective interpretation of whatever facts are unearthed. Indeed, the effect of such meditation involves, among other things, a trans-temporal, trans-spatial experience. Nevertheless, as much as Krishna’s lila itself transcends time and space, it thereby also has the capacity to appear within their jurisdiction, and that for the express purpose of expanding our limited material frame of reference.

That our space-time continuum is part of something larger than itself requires little imagination. The notion that consciousness is located somewhere—and only somewhere in the human brain—is proving to be as absurd as panpsychism was thought to be a decade ago. Meanwhile, panpsychism—the original form of which is Vedanta—has only gained credibility. If consciousness is underlying every single thing and thought, how deep does it go, and how rich in possibility is that world of consciousness unencumbered by things and thoughts about them? Vyasa explored that world in samadhi and reported to us on what he found. Regardless of how Krishna may have appeared to mundane eyes, seen with eyes of devotion arising out of a fully concentrated meditative mind that is actually paying attention and undistracted in pure yogic objectivity—free from bias arising out of material attachment—his lila carries far-reaching implications.

From the Srimad Bhagavatam’s perspective, the geographical reality is only virtual, while the inner landscape governed by Krishna’s interior sakti, wherein his lila is played out, is by comparison more real. When contemplating the sacred place of Krishna’s lila played out on our planet, we might consider that in today’s world, “real” geographic space has in good measure given way to spaces bound only by our technologically assisted imagination. A generation or two from now, virtual landscapes unbounded by topography may serve as the primary metaphors upon which our attitudes and values rest, rendering secondary the geographical spaces that served this purpose in the past. Indeed, we are already on the verge of a revolution in which a virtual currency and store of value—cryptocurrency—is arguably poised to replace fiat currency and gold. If you want to get to the bottom of things, follow the money.

According to Monier-Williams, the Sanskrit word lila has no definitive dhatu, or verbal Sanskrit root, from which it derives. As an aside and as we shall see ahead, in meaning, the word is more related to the origination of all things than to something that originates from another source. That said, the meaning of the various dhatus is for the most part conventional and thus determined by how learned people have used them. Usage thus determines meaning. In the works of Sanskrit poetry—kavya—we find that the dhatu li, “to melt,” “to absorb,” is thought to be that from which the word lila—“to play”—derives. The mind’s constructs melt as it becomes absorbed in samadhi of Krishna-lila. Then one is in a position to enter the play of the lila having been invited by bhakti. The word lila also implies the freedom of possibility found in drama and poetry that extends beyond the limits of everyday life. It is a feminine noun meaning drama, play, or pastime. Etymologically it is related to the Latin word ludus, and from there to the English word ludic—”spontaneous and undirected playfulness.”

What to speak of Krishna lila as it appears in our world of time and space in one universe after another, the entire world of time-space itself is considered the lila of Krishna’s avatara—lokavat tu lila kaivalyam. Reality is God’s play, circles of lilas within lilas, all of which have no purpose to accomplish other then play itself. They rhyme but not to any reason of our limited conjecture. Still, we may reason about them to understand reason’s own limits and then through wise, committed spiritual practice know in ways we could not otherwise, a knowing that is comprehensive in that it fully satiates the self. Such is the paro dharma of the Srimad Bhagavatam’s bhakti, through which we can learn the script and play a role in the lila of Purusottama.