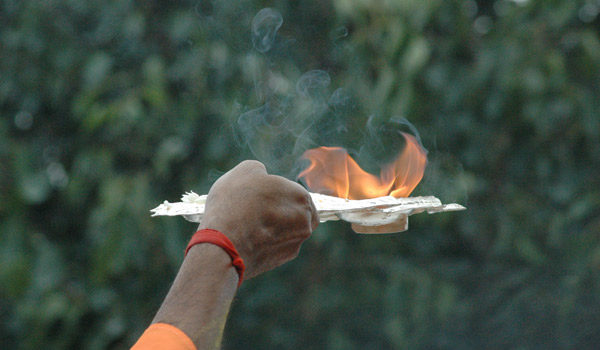 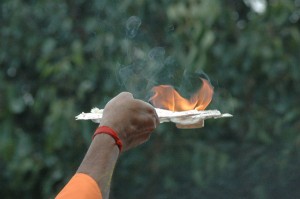 By Swami B. B. Vishnu

Among Hindu rituals there is perhaps no one ritual more well known than the arati ceremony. Anyone who has visited a Hindu temple has been allured, or due to insufficient knowledge perhaps frightened, when the lamp of fire passes from the altar to the congregation and circulates from person to person. The origin and significance of this colorful ritual speaks of its inner charm and potential to dispel all fear arising from the ignorance of material identification.

The Sanskrit word arati literally means “before night.” Ratri (night) when prefaced with the letter “a” indicates dusk. The waving of the lamp before the Deity thus implies the dispelling of the night of our material sojourn with the light of devotion through which God is revealed.

In addition to the lamp, the traditional arati includes other items, which along with the lamp correspond with the eightfold material elemental constituents. In the Bhagavad-gita, Sri Krsna mentions these elements thus: “Earth, water, fire, air, ether, mind, intelligence, and material ego, these eight elements constitute my separated material energy.” These material elements, five gross and three subtle, cover our soul. Corresponding with the gross material elements are the senses and sense organs: earth-smelling (nose); water-tasting (tongue); fire-seeing (eyes); air-touching (skin); and ether-hearing (ears). These five senses make up our physical dimension, while mind, intelligence, and material ego make up our psychic dimension. Under all of this we reside, like a diamond in the rough. Although our consciousness is covered by a mountain of material misconception causing us to identify ourselves with our body and mind, its potential to shine remains undiminished. Rituals such as arati are intended to remove the mountain of our misconception, as well as shed light on our positive potential in a life of transcendental love.

During the arati, first and foremost the devotee offers himself. In so doing, he removes ahankara, the material ego. He identifies no longer as the material body and mind. He identifies not with his personality derived from material association and experiences, rather with the notion that he is a servitor of the Deity. Thus in preparation for performing the arati, the devotee will often perform bhuta-suddhi, a ritual in which one adopts the ego of a servant. He may think of himself as such in a general sense or, in more advanced stages, in terms of his particular awakened siddha rupa, the perfected spiritual body in which he will participate eternally in Krsna’s lila. A typical mantra chanted during the bhuta-suddhi in the Gaudiya Vaishnava lineage is one that Sri Caitanya himself chanted.

In this verse, Sri Caitanya dismisses identification with the structure of varnasrama, the Vedic socioreligious system in which souls are classified in accordance with their physio/psychological karmic makeup. Reaching beyond religion, Sri Caitanya identifies himself as a maidservant of Krsna, the eternal husband of the gopis. If one can perform the arati with this ego, one needs not a lamp and oil, for such a perfected sadhaka’s eyes darting in sidelong glances serve as the lamp, and the prema of their hearts the oil.

In the traditional arati ceremony, the flower represents the earth (solidity), for all fragrance is found therein. The water and the accompanying handkerchief correspond with the water element (liquidity). The lamp represents the fire element (heat), the peacock fan the air (movement), and the yak tail camara fan the ether (space). The incense represents the purified state of mind, and one’s intelligence is offered in the discrimination required with regard to timing and order. The priest offers these items with the right hand, while ringing a bell with his left hand.

In the Gaudiya tradition, true to its emphasis on the efficacy of chanting the sacred names of God, the offering of all the arati items is preceeded by uttering the name of the Deity one is worshipping. Additionally, the Hari-bhakti-vilasa of Sanatana Goswami and Gopala Bhatta Goswami states that the blowing of the sankha, or conchshell, before and after the items are offered is essential. Thus during the arati, the devotee unravels himself from the entanglement of material nature by offering the Deity all of the material elements that color his consciousness.

In the case of krama mukti (going step by step through all levels of consciousness, as Gopa-kumara did in Sanatana Goswami’s Brhad-bhagavatamrta), the devotee will meet all of the deities presiding over the material elements and realize that they are eternally worshipping the supreme Deity. Those who perform arati can thus conceive that they are in presence of all of these deities in their purest expression of devotion to Krishna, an experience witnessed at the time of liberation.

Arati is both an individual activity performed regularly by the temple pujari and a public activity that devotees attend with great enthusiasm. During the arati the sweet aroma of pungent incense pervades the room, lights are dimmed, and gongs, bells, drums, and cymbals reverberate. Temples are traditionally illuminated by natural lighting, such as ghee or oil lamps, adding much to the mystical atmosphere that purifies all the participants.

Three types of purity are necessary for arati. The articles offered must be pure, dravya-suddhi. The offering procedure must be pure, kriya-suddhi, which depends on strictly following the instructions of revealed scripture and one’s guru. And finally, the consciousness of the offerer must be pure, bhava-suddhi. One’s consciousness is pure by having a service attitude and absorbing oneself in meditation. As bhava-suddhi intensifies, one enters into the spiritual world of Krishna lila, and the ritual becomes one’s reality.

Many temples, which understand their Deity seva to be nondifferent from the direct service of Radha-Krishna, modify certain aspects of the worship according to changes in season and climate. During the coldest winter months in Vrindavana, the Deities are bathed with hot water and a burner of hot coals heats the Deity rooms. Going for darsana, one sees that gloves, hats, foot-warmers, shawls, and even earmuffs are offered to most Deities. In the peak of the hot season, from Candana-yatra to Sarat Purnima, flowers and incense replace the (hot) ghee lamp at the noon arati in the Radha-ramana temple in Vrindavana. Many festivals with grand flower arrangements are held, sometimes with water fountains and fine mists of aromatic scented water cooling the Deities. Other times, during the last evening arati, musical accompaniment is played very softly just before the Lord takes rest.

While arati is a ritual that purifies the heart, a ritual leading to higher reality, it is also a reality unto itself. Such is the nature of bhakti, for devotion is both means and end. As we have heard, even the gopis perform arati, thus there is arati for the sadhaka and arati for the siddha. The Gaudiya Vaishnava lineage advocates the raga-marga, the path of passionate love of Godhead. As the sadhaka qualifies himself for raganuga sadhana, his orientation toward the rituals of devotion changes. The path of raga requires that the sadhaka regularly contemplate the eternal lilas of Radha-Krishna, and thus in the beginning stages of raganuga bhakti, the sadhaka thinks of the arati ceremonies throughout the day in relation to the eightfold daily pastimes of Radha-Krishna. Indeed, it is from these pastimes that the arati ceremony derives.

The eternal daily lila of Krishna is divided into eight sections that comprise the twenty-four hours from sunrise to sunrise. It is in the sunset pastime that the arati ceremony has its origins. At sunset Krishna returns from the forest with his friends and calves. The sun sets with embarrassment, acknowledging Krishna as the light of lights, who lights both day and night, defeating the splendor of the sun. All the residents of Vrindavana have been waiting impatiently for him throughout the day. Were it not for Krishna’s friend Madhumangala and his appetite, Krishna might not return home, so absorbed he is in his sportive play with his friends. As he approaches the village, Nanda Baba, his father, sees him from the rooftop of his house and signals to all of his dear son’s arrival. Decorated with the dust of the pasturing grounds raised by the hooves of his calves, Krsna appears more beautiful than when he left that morning. Mother Yasoda collects him in her arms, mildly admonishing him for his tardiness. She praises Madhumangala for bringing him home, as mother Rohini brings a ghee lamp to inspect Krishna’s body for scratches incurred in his sportive forest play (although in fact they may be due to his secret rendezvous with the gopis ). The lamp dissipates the night and enhances the union of Krishna and his devotees, dispelling the pangs of their separation. From this lila, just before night, arati has its eternal beginning. The lamp of his devotees’ love is thus held to the Krishna sun and that love-lamp itself is thus further illumined.

During the ritualistic day of the sadhaka, the day begins with mangal arati, one and a half hours before sunrise. This time corresponds with nisanta lila, the end of night and the waking of Radha and Krishna in the bowers of Vrindavana. While the beginning sadhaka views the arati as the end of the long night of his material slumber, and the dawning of his day of service to sri guru, the siddha envisions his soul’s participation in the lila, assisting those waking Radha-Krishna and helping the divine couple to reach their homes before the sunrise speaks of their secret love to all. As ordinary souls dread the end of night and slumber on in ignorance, the sadhaka rises early to conquer the ignorance of sleep. Yet the ultimate soul, Radha-Krishna, dreads the sunrise in the lila of love, for it brings to a close the union of Radha and Krishna and gives rise the pangs of their daytime separation, in which their secret paramour love must remain hidden. Thus it is stated in Sri Gita:

It is said in the Vedas that proportionate to the removal of darkness, the light of knowledge awakens in one’s heart, and to that extent kama, the heart’s longing, is destroyed. Yet it appears that in Vrindavana this is just the opposite. When the darkness of night comes to an end, the light of daybreak only increases the desire of Radha and Krishna to be united again. The customs of Vraja are beyond the reach of even the Vedas ! What is day for the sadhaka is night for those not treading the spiritual path. Yet what is day for the sadhaka is at the same time night for the siddha who lives in the lila of Radha-Krishna. The sadhaka takes joy in rising early to the new day, while the siddha laments in transcendental ecstasy over the separation of Radha-Krishna that the rising of the sun mandates. This transcendental lamentation is most desirable, and awakening to this ideal is mangal arati, the most auspicious arati of all.