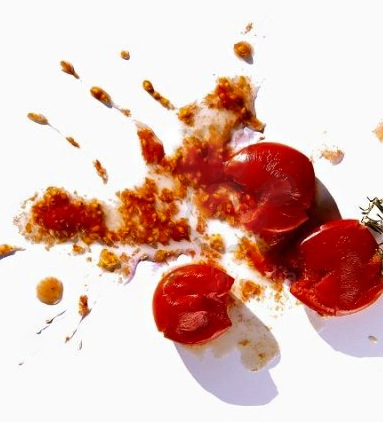 Some humans are deeply passionate about their meat. They love it, they gnash their teeth for it. In her 2006 spiritual travelogue Eat, Pray, Love, Elizabeth Gilbert confessed a kind of affinity with the sensual Tuscan culture of meat. Shop windows in the Italian town, she writes, are loaded with sausages “stuffed like ladies’ legs into provocative stockings” or the “lusty buttocks” of ham. The net effect, she suggests, is the emanation of a “you know you want it” kind of sensuality. Make no mistake. Meat—the flesh of non-human animals—is a force of desire in human life.

But is there an ethical argument in favor of flesh consumption? That is, can a meat-eating human find solid moral ground for her more carnivorous appetites? Is there a soul-cure for the stomachache that comes from eating the body of another sentient creature? Are these questions that the vast storehouses of religious traditions can help us navigate?

In a culture where plates are piled high with the spoils of profligate factory farming, it would seem that the growing surge of vegans and vegetarians have claim to the moral high ground. One might even make the argument that religious vegetarianism is one of the few things that makes modern religions look good. But not everyone is satisfied with this solution. “Ethically speaking, vegetables get all the glory,” Ariel Kaminer lamented in the New York Times, playing the role of the paper’s esteemed Ethicist. And so, in an attempt to buck this trend the paper launched an essay contest in March of this year: in search of the ethical argument for meat.

Essays were judged by a star-studded panel that included vocal vegetarians like Peter Singer and Jonathan Safran Foer as well as more cautiously omnivorous foodies such as Michael Pollan and Mark Bittman. Controversy ensued over the fact that the panel was comprised entirely of men. But, gender issues be damned, results were published in late April. Six essays made the cut. The final stage was to give Times readers four days to vote on their personal favorite. Almost 40 percent of voters appeared to favor the ethical argument in favor of in vitro meat. “Aside from accidental roadkill or the fish washed up dead on the shore, it is perhaps the only ethical meat,” essayist Ingrid Newkirk baldly proffered.

If Peas Can Talk…

The argument that stirred me most, however, was one of the lower-scoring essays—earning a mere 10 percent of voter approval. Interestingly, it wasn’t really an argument in favor of meat at all, so much as it was an attempt to dramatize the moral stakes of the practice.

“We would be foolish to deny that there are strong moral considerations against eating meat,” philosophy professor Bob Fischer begins. Eating meat is clearly, from an ethical perspective, “wrong” on several counts. But morality is an ideal, he notes, something we aim for, and fall short of. This makes the moral world “tragic,” as he puts it. Moral work is a tragedy, played out on a cosmic stage. Rather than wallow in remorse, he sees this as a reason to be suspicious of “any proposal that would steer us through these complexities too quickly.”

When it comes to the consumption of meat, in other words, our human hands have long been dirty. This isn’t a discouragement to stop striving for the good. But a moral proposal that promises to wash our filthy fingers spotlessly clean—in seconds flat—is suspect. Because they will still be dirty. The pressing moral question, of meat, becomes: given that human hands are obviously soiled, what can be done with these polluted tools?

The easy answer, most often, is: go vegetarian. If it feels wrong to eat meat, then stop eating it. Why waste time, really? Just go vegan. Start cleaning your hands by refusing to eat your fellow creatures. The ethical argument for meat, in other words, is an impossibility. Ending flesh consumption is one step in the right direction, toward a kinder future. Some might argue, however, that the argument from empathy is a slippery slope argument. Vegetarians will surely protest. But philosopher Michael Marder, writing recently for the Times, points to research on pea plant communication as evidence of a kind of plant subjectivity. The title of his column begs the incendiary question: “If peas can talk, should we eat them?”

There are, perhaps, some practitioners of the Jain tradition who would give a resounding “no.” Strict ascetic practices in Jainism disavow not only the consumption of meat, but the practice of farming—because of the damage that agricultural tools to do the earth. The consumption of root vegetables may be prohibited (as you would be yanking the vegetable to its death), as well as the consumption of a living pea shoot, which can (as Marder suggests)talk.

These practices find their basis in ahimsa—the Sanskrit term that describes a posture of nonviolence toward all living creatures. The power of ahimsa can be genealogically traced into the vegetarian strains and variants of Hinduism, Jainism, and Buddhism. Is it when we turn to the wisdom of religious traditions that we finally find the spiritual purity we’re looking for? The sort that can clean our dirty hands from the inside out, starting with our nasty and brutish souls?

My own thinking around religion and animals, particularly around the conundrum of eating them, was complexified at a recent conference, put on by the Graduate Student’s Association in Columbia’s Religion Department. The consumption of animal flesh was not the primary subject matter of “Pray, Eat, Kill: Relating to Animals Across Religious Traditions,” but it was perhaps the most absorbing. It was also the subject of Wendy Doniger’s keynote address. The legendary scholar of myth and religion dipped back into ancient text, citing myriad strange injunctions regarding the consumption of food in The Laws of Manu. What she finds, in these codes, is not only an attempt to deal with the old, and apparently always agonizing, moral pain of eating animal flesh. She also spoke of references, in these ancient texts, to the “screaming silence” of vegetables.

Doniger finds, in other words, a long history of reflection on the basic brutality of eating, rooted in a reflection on this concept of ahimsa. But, interestingly, what she finds is that this sympathy and compassion for animals did not always lead to the condemnation of eating animal flesh.

The fact is, religious ethics are practices that are crafted in conversation with culture and geography. There have been times when the meaning of ahimsa, or practices of animal compassion, have taken a backseat to necessity. Geoff Barstow, for example, spoke of the 18th-century Tibetan Buddhist Jigme Lingpa who displayed an extreme form of compassion for animals (addressing them as his mother). He believed that meat was a poison that bore a heavy karmic burden. But he stopped just sort of commending vegetarianism. Meat was, as Barstow put it, a kind of “necessary evil.” Was this in recognition of the fact that there simply aren’t a lot of vegetables to be had in the mountainous regions of Tibet?

Is the purity (or the arid ethical high ground) we might be aiming for a myth, itself? Is it possible to both consume and remain morally chaste? Doniger suggests that, perhaps, the most common and lasting effect we can see—as reverent humans attempt to deal with the moral ambivalence of eating meat—is that they make lists. They attempt to rationalize this ambivalence, to find a way of controlling its power. The Laws of Manu are filled with long lists of things you can and cannot eat (mushrooms, solitary animals), things you can and cannot do with animals (sacrifice is good, unlawful slaughter is bad).

Such lists are not unique to the Hindu tradition. Indeed, we see both simple and complex dietary regulations in a host of traditions and cultures. Even here in the U.S., we have “secular” regulations that prevent us from eating dogs. Many of us follow our own little personal hodgepodge of injunctions that (we believe) contributes to a more sustainable form of life or a healthy planet.

In a larger sense, the thicket of little rules and regulations seems absurd. The “real” question, it seems, is whether or not to eat animals at all—whether to have all or nothing, flesh or no flesh. But such universal injunctions seem problematic to me. Human history is littered with smaller lists, smaller injunctions, created in ethical conversation within a particular context.

When we look back at the stages set by the history, via religion, I think we will see this moral drama—the encounter of human and non-human animal—played out in many different ways. In the messy, violent, ambivalence this encounter generates, and the stopgap measures put in place to resolve it, we see thousands of small (often contradictory, often bizarre) solutions. We might read thousands of lists! But this is not a sign of our human failure. Rather, I think we can see it as an encouragement to keep making those small lists.

Morality is a messy business—why should we expect its rules to be singular, or simple?

40 Responses to Eat, Pray, Kill: The Basic Brutality of Eating