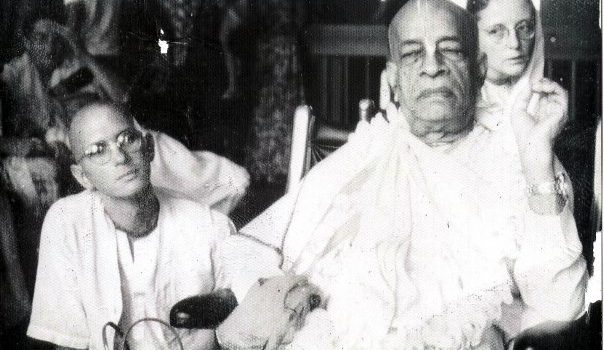 Considering the Mercy of Srila Prabhupada 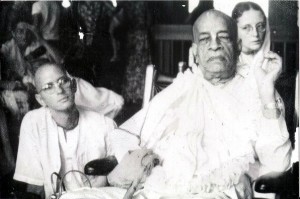 About 500 years ago, Lord Krishna personally appeared as Sri Caitanya Mahaprabhu in the place of the avatar for the age of Kali. Lord Caitanya had two purposes for coming: to experience first-hand the bliss of serving Krishna and to spread pure love for Krishna, which is very rare. Writing about Lord Caitanya’s plan for making his mercy widely available, Srila Krishna dasa Kaviraja Goswami says, “sri-krsna-caitanya-daya karaha vicara, vicara karile citte pabe camatkara: If you are indeed interested in logic and argument, kindly apply it to the mercy of Sri Caitanya Mahaprabhu. If you do so, you will find it to be strikingly wonderful.”

Actually, Lord Caitanya revolutionized Vaisnavism. He took Krishna consciousness into the streets when he inaugurated the congregational chanting of Krishna’s holy names and deputed bands of devotees to widely preach the glories of sankirtana and pure devotional service. He himself traveled all over India preaching Krishna consciousness. He specifically deputed Lord Nityananda to preach in Bengal. Whereas Lord Caitanya’s direct followers came mostly from the higher social classes, Lord Nityananda made absolutely no distinction. He approached anyone and everyone, as demonstrated in his pastime with Jagai and Madhai, and implored them to take up devotional service to Krishna accompanied by chanting Hare Krishna.

In the mid-nineteenth century, Srila Saccidananda Bhaktivinoda Thakura saw that Lord Caitanya’s teachings had become distorted in several ways and had fallen into disrepute. He conceived a dynamic plan to spread the glories of devotional service to everyone around the world. Part of his program was a modern approach to presenting Krishna consciousness. He presented the philosophy of Srimad-Bhagavatam in a way that even those who were influenced by modern Western philosophies, both in India and abroad, could appreciate it.

Essential to Bhaktivinoda’s revolutionary view was the understanding that Lord Caitanya was not exaggerating when he said that his name would be sung in every town and village around the world. He wrote about Krishna bhakti not only in Sanskrit and Bengali but in English, as well. And he sent some of his books to universities and prominent thinkers in Europe and North America.

Bhaktivinoda wrote in his monthly journal Sajjana-tosani, “Sriman Mahaprabhu did not descend with his associates to deliver a certain number of human beings in the land of India, but rather his purpose was to deliver and uplift all living beings in all countries of the world by practicing the eternal religion of all souls.” He quoted a verse from Caitanya-bhagavata in which the Lord predicted, “My name will be preached in all the countries and towns that exist throughout the world.” Bhaktivinoda Thakura then expressed his heart’s desire: “There are many kinds of religion in the world, and among all of them the highest development of religion is the congregational chanting of the Supreme Lord’s divine names. Of this there is no doubt. Alas! When will that day come when greatly fortunate souls in countries such as England, France, Russia, Prussia, and America will take up banners, kettle drums, mridangas and karatalas and thus cause the ecstatic waves of harinama-kirtana and the singing of Sri Caitanya Mahaprabhu’s Holy Name to rise in the streets of their towns and cities? O when will that day come, when pure and transcendental Vaisnava-prema will be the only religion of all souls and all tiny sectarian religions will meet in the unlimited and universal religion of Vaisnavism as rivers merge into the great ocean? O when will that day come?”

Bhaktivinoda Thakura’s plan for propagating Krishna consciousness also included reviving a scientific daivi-varnasrama system to help make society more conducive to spiritual culture. He passed this vision of preaching Krishna consciousness to his son and siksa disciple, Srila Bhaktisiddhanta Sarasvati Thakura, who extended Bhaktivinoda’s revolution by taking concrete steps to reinstitute certain aspects of varnasrama culture. Asserting that vaisnavas are as good as brahmanas, Bhaktisiddhanta Sarasvati gave his disciples the sacred thread at initiation, regardless of their family lineage. He also reintroduced the asrama of tridandi-sannyasa to Gaudiya Vaisnavism. Moreover, he created an organized institution for systematically propagating Krishna consciousness and trained his disciples to aggressively confront all forms of false religion. And, following the desire of his guru and father, Bhaktivinoda Thakura, he sent not only books, but his students to Europe. He invested considerable energy in their efforts to introduce Sri Caitanya’s teachings in England and Germany, which were among the world’s most influential nations. He also confided to some of his students that if he had a few more years, he would spend them in America.

Throughout his preaching career, Bhaktisiddhanta Sarasvati exhorted everyone he met to help spread Krishna consciousness to the entire world. His Divine Grace A. C. Bhaktivedanta Swami Prabhupada recounted that when he first met his spiritual master, Srila Bhaktisiddhanta immediately challenged him and his friends, as educated young men familiar with English, to take Caitanya Mahaprabhu’s mission seriously and teach it to those who spoke English. In his last days, Bhaktisiddhanta Sarasvati told his disciples to, above all, work cooperatively to continue and expand the systematic preaching he had begun, following Bhaktivinoda’s instructions.

Among Bhaktisiddhanta Sarasvati’s many disciples who were working to spread Lord Caitanya’s message as broadly as they could, Srila Prabhupada worked steadily toward further extending this transcendental revolution. We know now how he persisted over the years to satisfy Bhaktivinoda’s and Bhaktisiddhanta’s desire for systematically making Krishna consciousness available to everyone everywhere in the world. He worked with his Godbrothers for decades, published Back to Godhead single-handedly and distributed it himself, wrote Easy Journey to Other Planets, translated Srimad-Bhagavatam, and coaxed Sumati Morarji to give him passage on a freighter to New York, where he arrived practically penniless at the age of 70. We can see hints of the depth of his compassion and surrender in the notes he made in his diary aboard the Jaladuta. Particularly telling are the poems he wrote expressing his utter determination and dependence on Krishna’s mercy to accomplish the task his spiritual master had given him. In his “Prayer to the Lotus Feet of Lord Krishna,” written in the middle of the Atlantic Ocean, he appeared to bargain with Krishna in the way the Lord’s intimate friends in Vrndavan do, almost inveigling Krishna, invoking his help. He wrote, “Athough my Guru Maharaja ordered me to accomplish this mission, I am not worthy or fit to do it. I am very fallen and insignificant. Therefore, O Lord, now I am begging for your mercy, so that I may become worthy, for you are the wisest and most experienced of all. If I receive that divine empowerment from you, then, by serving my spiritual master, I will attain the strength to render this service, and the purpose of my existence will be fulfilled.”

After suffering two heart attacks on the ship, Srila Prabhupada struggled in New York to distribute his books and establish the International Society for Krishna Consciousness. He worked tirelessly for twelve years to translate, publish, and distribute many authentic literary works, establish temples on every continent except Antarctica, and train thousands of disciples to carry on his work. Srila Prabhupada initiated about 5,000 disciples, produced over 60 volumes of literature on Krishna bhakti, including translations and commentaries on Srimad-Bhagavatam, Bhagavad-gita, and Sri Caitanya-caritamrta. He and his disciples also established over 100 centers for worshiping Krishna and distributing the science of Krishna bhakti around the world. Just how assiduously he worked can be understood to some degree by reading the many memoirs written by some of those disciples.

I found one incident illustrating this quite striking. In 1976, while Srila Prabhupada was staying in Honolulu, Hawaii, some friends of mine, visiting from Kona on the Big Island, spent a night in the temple’s front yard. Unable to sleep, they stayed up until mangala-arati chanting japa and watching the window of Srila Prabhupada’s room. He was up all night working on his books, occasionally stopping to play his harmonium and chant devotional bhajans. Years later, while I was editing a volume of Hari Sauri dasa’s A Transcendental Diary, I read the accounts of his personal staff checking his dictaphone in the mornings, amazed by the amount of work Srila Prabhupada accomplished. He wrote of May 10, which may have been the night my friends observed him, “It is the first time since I have been with him (over five months now) that he has missed his evening rest. He worked all through the night, and after he went for his early morning ablutions I checked his dictaphone and saw that he had notched 320 digits on the counter (normally he does fifty or less). He was able to get twenty-five verses of the Eighth Canto done.” Although he was almost 80 years old, he worked through the night to satisfy the desires of his spiritual master and Lord Caitanya Mahaprabhu.

Looking back, one of Srila Prabhupada’s prominent Godbrothers, Srila B. R. Sridhar Maharaja, concluded that Srila Prabhupada had been personally empowered by Lord Nityananda to give Krishna consciousness to everyone everywhere in the world. After reading the poems Srila Prabhupada had written aboard the Jaladuta and on his arrival at Boston Harbor, he reasoned that, at least by the time he had boarded the Jaladuta, Srila Prabhupada had emptied himself of all desires except to spread Caitanya Mahaprabhu’s message. And very much like Lord Nityananda, who gave anyone and everyone he encountered the most valuable treasure of the chanting of Hare Krishna in exchange for only a little faith, Srila Prabhupada freely distributed the holy name of Krishna to anyone who showed even enough faith to stop and listen for a moment. Lord Nityananda distributed what amounted to free samples of the highest spiritual realization, confident that those who tried the sample would want to buy his product, possibly becoming steady customers. Srila Prabhupada also gave out free samples of harinama, advertising it with the slogan, “Chant Hare Krishna, and your life will be sublime.” Consequently, millions who tried it became at least lifetime customers, if not distributors.

Srila Bhaktisiddhanta Sarasvati had implored his disciples to work vigorously to spread Krishna consciousness everywhere, thus satisfying the desires of Lord Caitanya Mahaprabhu and Bhaktivinoda Thakura. “The line of Bhaktivinoda will never be closed,” he wrote. “With even more enthusiasm you should become engaged in preaching the desire of Bhaktivinoda’s heart.” He also figuratively exhorted all his disciples to “be prepared to shed two hundred gallons of blood for the nourishment of the spiritual corpus of every individual of this world.”

Considering objectively what Srila Prabhupada did in his lifetime, we can safely conclude that he set the perfect example of sacrificing everything to satisfy Krishna. It’s clear that he understood the revolutionary desires of Lord Caitanya, Bhaktivinoda Thakura, and Bhaktisiddhanta Sarasvati Thakura and worked to bring about what Srimad-Bhagavatam calls “a revolution in the impious lives of this world’s misdirected civilization.” Anyone who uses logic and argument to consider the mercy of His Divine Grace A. C. Bhaktivedanta Swami Prabhupada will certainly find it strikingly wonderful.

2 Responses to Considering the Mercy of Srila Prabhupada