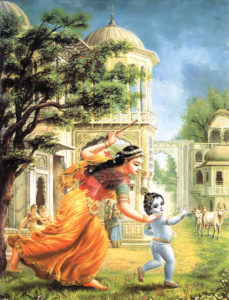 In honor of the month of Kartika, the Harmonist will be publishing verse by verse “Sri Damodarastakam” with the Dig-darsini-tika of Sri Sanatana Goswami Prabhupada.

I offer my respectful obeisances unto that supreme God whose form is composed of eternity, knowledge, and bliss; whose earrings swing and play upon his cheeks; who is splendorously manifest in Gokula; who is very fearful of mother Yasoda and who, jumping down from the wooden grinding mortar, quickly runs away; who is chased by Yasoda running very quickly after him, and is ultimately caught from behind.

Bowing before Sri Damodara-isvara, who is accompanied by Sri Radha, I now commence my purport of Damodarastaka entitled Dig-Darsini. In the beginning of the mula-sloka, the very first intention is expressed by the word “namami“—”I bow down.” Obeisances are thus offered with love and devotion before commencing the description of the Lord’s specific characteristics of excellence that are exhibited by his tattva, rupa, lila, guna, and so forth. Also mentioned is the essence of his own divine supremacy as the supreme personality of Godhead manifested in Gokula, and also his distinctive features as the origin of all. Furthermore, the word namami is indicative of an auspicious invocation (mangalartham). At the start of all functions it is customary to express an attitude of devotional service unto the Lord by offering respects to Isvara. For this reason, obeisances are offered first unto the Lord in this verse.

Obeisances unto whom? Unto Isvara, the supreme controller. Namely, he who is sarva-saktimanta (endowed with all potencies), jagat-ekanatha (the only Lord of the universe), and nija-prabhu (my own master). In the first instance he is addressed as such in order to obtain the power of sakti needed to offer the prayer; in the second instance he is addressed as such to indicate that he is the one and only Godhead and is praiseworthy; in the final instance, he is addressed as such to signify the specific nature of bhakti, or devotion. How is he manifest? As sac-cid-ananda-rupam or a form composed of compressed clouds of eternity, knowledge, and bliss.  This is the statement of his supreme sovereignty in regards to his tattva-visesa attribute, or excellence of truth.

His distinct excellence of beauty is illustrated as follows: lasanti (the swinging of His earrings) was manifested when he ran away in fear of Sri Yasoda. Also, his earrings sport upon his cheeks as a result of his continuously playing in the transcendental pastimes of childhood. Thus his divinely splendorous face is especially portrayed. Yet another meaning of “lasat-kundalam” is that due to the maha-saubhagya, or great fortune of personally kissing his divine cheeks, these earrings have attained a position of superexcellence above all of his other ornaments. This superexcellence also indicates the fortune of the other ornaments adorning his various limbs. Furthermore, lasanti indicates that these earrings are glistening because they are enriched with the effulgence of the Lord’s bodily complexion; therefore Krishna’s body is the ornament of his ornaments. This is the meaning. Consequently, it is stated by the gopis in the Srimad Bhagavatam, “O Sri Krishna! By seeing your beauty, which attracts the three worlds, these cows, birds, trees, and deer are all experiencing their hairs standing on end!” (10.29.40) Earlier in the Bhagavatam Sri Uddhava says the following to Vidura regarding Krishna’s beauty: “Sri Krishna’s beauty is so enchanting that it even astonishes himself. That beauty represents the supreme zenith of great opulence, so much so that he is actually the ornament of his ornaments.” (3.2.12)

Now the parivara-visesa, or attributes of his family portray his unique excellence. The word gokule indicates that place where gopas, gopis, cows, calves, and so forth reside.  The word bhrajamanam indicates a particularly befitting place wherein he can manifest an excellence that surpasses that of previous lilas. Moreover, Krishna is wonderful because only in Gokula does he manifest his svabhavika-sobha, or most natural characteristics of brilliance. The Bhagavatam states, “Manifesting a body that is the abode of all the splendor of the three worlds, [Sri Krishna] sat upon the asana presented by the gopis, was worshipped by them, and thereby radiated even more splendor.”

Krishna’s excellence of lila-visesa, or attributes of his pastimes, are stated in the last two lines of the verse.  The word “yasoda” indicates yasodaya, or, “from his mother, Yasoda.” Bhiya indicates the fear of being punished for his offense of breaking the yogurt pots, stealing fresh butter, and so on. “Ulukhalat” denotes “from the mortar”: in order to steal the fresh butter suspended from the rafters, he took a large wooden grinding mortar that was kept in the same storeroom, turned it on end, and climbed up on it; but (spotting his mother coming into the room with a stick in her hand) he immediately got down again; and then, dhavamanam—he speedily ran away. In this regard, if one desires to know the particulars of this pastime, it can be found in the Tenth Canto of Srimad Bhagavatam thus:

Then Sri Krishna turned the grinding mortar on end, climbed up on it, and began distributing fresh butter, which had been hanging from the rafters, to the monkeys. Due to knowledge of his own mischievous thievery, his eyes fearfully darted this way and that. Mother Yasoda saw him doing this and slowly crept up from behind to catch him; but he noticed her coming with a stick in her hand, and he quickly got down from the mortar and started running away, just like a person stricken with fear. Even though highly advanced yogis are enabled by the strength of their penances to merge their minds with brahma, still they cannot get a glimpse of this scene; Yasoda-devi chasing her son Krishna from behind while attempting to catch Him.” (10.9.8-9)

Then, tato-drutya—she ran very swiftly. Due to the samasa conjunction, these two words become one. Gopya, by Sri Yasoda, para amrstam—catching hold of his back. Here the words “atyanta tato drutya”(running behind Krishna very swiftly) imply the saundarya-visesa (excellence of beauty) of Yasoda’s full breasts, broad hips, and so on; as well as the particulars of her affection for her son. The loving use of the word gopya connotes the grand fortune that came upon the gopa caste (by Krsna preferring to appear among them).  By the word paramrstam (caught by His back), the unique attribute of superexcellent affection that Bhagavan Sri Krishna feels for Yasoda-mata (sneha-visesa) is intimated. In this regard, one may search out the following verse from the Tenth Canto:

While chasing after Krishna, the slim waisted Yasoda’s broad hips caused her pace to slow down. From running quickly, the flowers had come loose from her hair and were falling after her, but she still continued to pursue him. In this fashion, after chasing and chasing Him, she finally caught him from behind. (10.9.10)

3 Responses to Sanatana Goswami on Sri Damodarastakam, Verse One