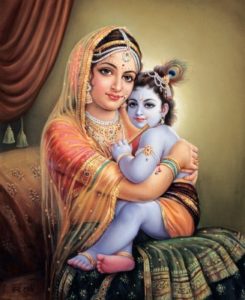 O Lord! Your lotus-like face is completely surrounded by curling dark blue hair with a glossy reddish tint and is kissed again and again by mother Yasoda. Your lotus face is endowed with lips red as bimba fruits—may your face always remain visible in my heart. The attainment of millions of other boons is completely useless to me.

The longing to see Krishna’s sri-mukha, his divine lotus face that is parama-manohara (supremely enchanting) is expressed in this verse beginning with idam te. Sometimes one is meditating deeply within and perceives such indescribable beauty and splendor—that is what is revealed in this verse. His face is praphulla-kamalakara, it resembles a fully-blossomed lotus flower, and, nikhila-santapa-hari, it is the remover of all kinds of distress and it is pervaded with the supreme mellows of pure bliss. That lotus face, manasi muhur-avirastam, may it be revealed again and again within my mind. What does that lotus face look like? It is surrounded (vrtam) by curling hair (kuntala) that is very dark blue (atyanta-nila), glossy (snigdha), and tinged with red (rakta). The word vrtam suggests that just as a lotus flower is surrounded with hovering honeybees, similarly Krishna’s lotus face is encircled with curly locks that bounce around whenever he moves. The word gopya (“by the gopi“) indicates that his face is kissed again and again by either Sri Yasoda or by Sri Radha. The word muhuh (again and again) is relative to this word gopya, and it reads properly exactly where it is in the verse. This being the case, may that divine lotus face, muhus-cumbitam, be kissed repeatedly by the supremely fortunate gopis. May this lila appear in my mind even once.

The word sada (always) found in the previous verse carries over to its definitive conclusion in the present verse, thereby indicating “may it always manifest.” Finally, that lotus face is especially described thus: bimba-vad-raktadharam, he whose lips are cherry red like the bimba fruit. (If that form is manifest within my mind, I will be fully satisfied.) Therefore it is said about laksa-labhaih, the attainment of millions and millions of other types of benedictions, they are alam, of no use whatsoever. This is most definitely the message that is conveyed by the fifth verse.