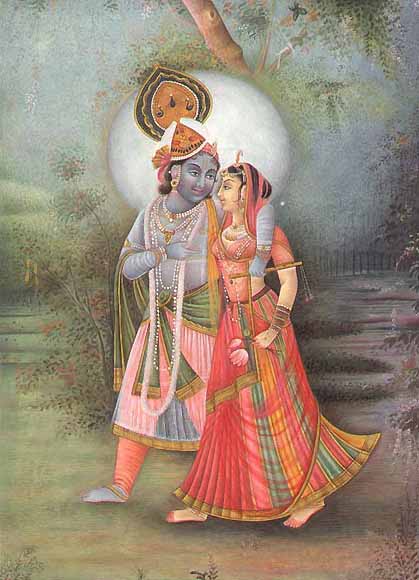 In honor of the month of Kartika, the final verse of “Sri Damodarastakam” with the Dig-darsini-tika of Sri Sanatana Goswami Prabhupada.

At the conclusion of the prayer, in order to summarize the presentation of topics that are being prayed for and also to arouse the attributes of bhakti, obeisances are given separately unto Bhagavan’s unique binding, bodily limbs, associates, and so on. It is stated, “te damne namo ‘stu,” “I bow to the maha-pasa, the magnificent rope that binds your belly.” What is this grand rope like? It is sphurantya dipte dhama—the source of a magnificent effulgence. In this regard, it is suggested by the author that such a maha-pasa is the very abode of the (endlessly radiant) concentrated brahma-teja, or all-pervading Brahman effulgence.

Then, “tvadiyaya udaraya namo ‘stu,” I bow to your belly, because while bound with ropes, you especially manifest the beauty and other qualities of your belly as well as the glorious characteristics of vatsalya-lila and other pastimes. “What is that belly like? It is called ‘visvasya dhama‘—the support for all the universes in creation, including all the stationary and moving beings contained therein. From the lotus navel on his abdomen has sprouted a gigantic lotus flower that sustains the fourteen worlds. Additionally, (during his childhood pastimes in Vrindavana) he displayed the visva-rupa, or universal form, to his mother on two occasions. This is another indication. Therefore, in such a pastime of binding him by the waist, mother Yasoda bound up the whole universe, indeed, she brought the entire creation under her control. This is the proclamation.

It is never possible to factually bind the (all-pervading, limitlessly potent) Godhead, who is Isa (the supreme controller), but he willingly accepts binding as an attribute of his superexcellent affection for his devotees (bhakta-vatsalya-visesa). By that acceptance of binding we are informed that such pastimes are imperceptible to all the logic and reasoning available within all the material universes. This is an intimation of his aisvarya-visesa, or attributes of majesty. The reason for offering obeisances first unto the rope (dama) and then unto the Lord’s belly (udara) is to indicate the ascending superiority in the significance of different things, (respects are first offered to the rope, then to his belly).

The author then offers obeisances unto Sri Krishna’s beloveds, Bhagavati Sri Radhika—”namo radhikayai.” This is done in order to show that the mercy of Krishna’s beloved enables one to fully attain the desire objective, including objectives that are even beyond the range of desire. By offering obeisances unto Sri Radhika, it is implied that obeisances are also being offered unto all the gopis, but since Sri Radhika is the foremost of them all, obeisances are offered unto her. The word radhika is used here to denote the attributes and excellence of one who is always engaged in Sri Bhagavan’s aradhana, or worship (arranging only for his pleasure); this is the purpose of using her specific name, “Radhika,” in this text. Therefore, tvadiya-priyayai, “Obeisances unto your beloved.” The name “Radhika” also indicates rudhi (in grammatical terms, it is capable of conveying a meaning not supported by derivation). Therefore, regardless of her aradhana, she is still eternally the dearmost beloved (nitya-priya) of Sri Krishna. In this connection also, the word “tvadiya” indicates that not only is Radhika dear to Krishna, but to all of his other devotees as well; what more could then be said about how dear she is to Krishna? Additionally, this statement implies that he is also her nitya-priya (eternally dearly beloved). By such the excellence of Sri Radhika’s love for Sri Krishna (prema-visesa) is suggested. The words “priyayaih namah” in this verse can either mean, “My obeisances unto you, Radhika’s beloved,” or, “My obeisances unto Radhika, your beloved. Whoever is beloved to you, such a person is certainly worshipable for the entire universe. Therefore, since Radhika is your own dearmost beloved, namo ‘stu, I bow before her.”

At the conclusion of the prayer, the author desires to describe the supreme superexcellence of the rasa-lila and other transcendental pastimes that Lord Sri Krishna performs with Sri Radhika, but since these are the topmost of confidential topics, they are not mentioned directly. The logic of madhurena samapayet—”all undertakings should be completed sweetly”—applies here.  Therefore such confidential pastimes are referred to only by a mere dint as they are offered obeisances with the words “namo ‘nanta-lilaya” (obeisances unto your limitless pastimes). The word “devaya” indicates that obeisances are offered unto Bhagavan, who is lokottara, supernatural, divine, transcendental. With this it is intimated that by Damodara Kishna’s divinely supernatural qualities, all of his lilas are also similarly transcendental. This could also be interpreted to mean, “My obeisances unto you who are continuously engaged in pastimes along with Sri Radhika.” By the words “ananta-lila” it is suggested to include all the pastimes associated with the realm of Gokula Vrindavana. I offer my obeisances unto all those lilas.