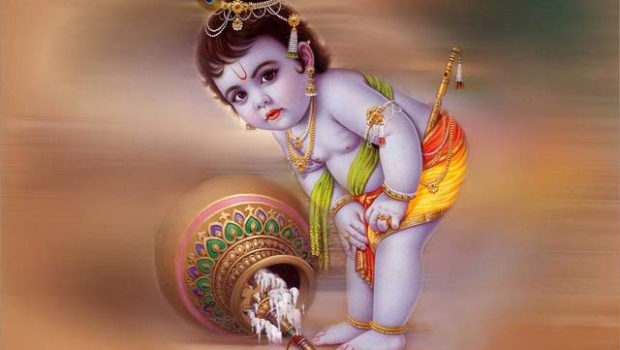 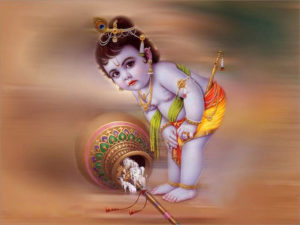 O Lord! Although you are capable of granting any boon, I do not pray to you for liberation, nor for eternal life in Vaikuntha or for any other benediction. O Lord! May your form as a cowherd child forever remain manifest in my heart. Other than this I have no need of anything.

Continuing the description of Krishna’s particular excellences, the prayer progresses with a request that mentions one’s cherished desires. This is presented in this verse as well as verse five, starting with the word varam. Deva means “O supremely effulgent one!” and it also implies “O Lord engaged in superexcellent sweet sports!” Iha indicates that “here in Vrndavana,” varesad, from Krishna, who can bestow any benediction, varam na vrne, I do not seek any boon.  Specifically, I do not pray for moksa, the fourth purusartha, or goal of human life (to achieve freedom from material contact by merging into the Brahman effulgence); nor do I pray for moksaya-avadhim, the highest supreme zenith of liberation in the form of eternally living in Sri Vaikuntha-loka, where the excellence of life is the nature of thickly condensed happiness. I do not even pray for anyan ca, other things such as the nine methods of devotional service headed by sravana. I do not desire the boons that may be obtained by any of these processes. Even if you want to give them to me, and even if others consider such things to be very appealing, iha, here in Vrindavana I do not have the slightest desire for them.

The word iha can also be used in relation to the statements of the rest of the verse. It is naturally understood that the three benedictions referred to—moksa (liberation), moksavadhi (the highest zenith of liberation) and anya (other things)—all reflect an ascending level of superiority, each being greater than the last. In this regard, the superiority of Vaikuntha to impersonal liberation is clearly described in Brhad Bhagavatamrta, Uttara Khanda. (1.14-15)

The superiority of the nine process of devotion to Vaikuntha-loka is described in the Bhagavatam thus: “(The four kumaras headed by Sanat, after cursing the disrespectful devotees named Jaya and Vijaya, said to Visnu, who had just appeared,) ‘Oh Lord, we pray that you let us be born in any hellish condition of life, as long as our ears are always filled with the chanting of your transcendental qualities.'” By these words, it becomes evident that the nine processes of devotion beginning with sravana can be perfected even while living in hell. Wherever one is, and in whatever condition of life, one thereby experiences the perfection of living in the eternal abode of Vaikuntha. This being the case, then what boon does one want from the Lord? The answer is given in this fourth verse of Damodarastakam: “he natha!”, “iha idam te vapur gopala-balam“—”O Lord! This form of yours as a cowherd child in Vrindavana,” sada me manasi avirastam, “may such a form ever be manifest in my mind.”

Since Krishna is antaryami, situated as the indwelling Supersoul, he may be seen manifesting the divine beauty of his every limb within one’s heart, just as clearly as one sees directly with the eyes. Still, (even if Krishna were to personally address the devotee and offer) “O he! The above-mentioned three kinds of boons beginning with moksa are not ordinary; they are most desirous, and anyone would immediately accept them… would you accept them?” The answer is given herein: kim anyaih—”What is the use of all these things? They have no value to me.” This is the meaning.

The reason behind this attitude is Sri Krishna is composed of all the bliss in the universe, so if he is attained then everything else is automatically and perfectly attained. But if one cannot attain Krishna, then the imperfection perceived in the absence of the desired goal especially creates a grand distaste and lamentable misery at the mere thought of attaining something of lesser value. Therefore it is said here that other boons are useless, kim anyaih. This is the mood.

Additionally, the words kim anyaih show yet another meaning: (again the Lord may ask) “Even though you do not pray for the boons beginning with moksam, would you care then for the boon of directly seeing and conversing with my supremely worshipable four-armed form (of Sri Narayana and other aisvarya-maya-murtis)?”  The answer remains the same, kim anyaih. The thought behind this is as follows: “If your divine form of a cowherd child (which is the crest-jewel of all splendors) would always be manifest in my heart, then I would feel very, very pleased; nothing short of that would satisfy me.” This is the mood. For further details regarding the glories of antar-darsana (seeing God within the heart), please see Brhad Bhagavatamrta, Uttara-Khanda (2.86-96). Therein the sage Sri Pippalayana on the planet Tapoloka has explained all these principles very elaborately. Now the Damodarastaka prayer offered by Satyavrata Muni similarly demonstrates that the longing for inner darsana is the best goal of all. From this prayer all these things can be clearly understood.