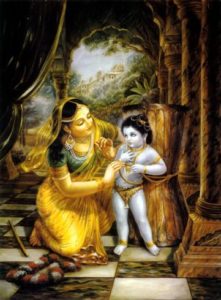 O Damodara! Although you were bound to the mortar with ropes tied by mother Yasoda, you mercifully liberated the sons of Kuvera who were cursed by Narada Muni to stand as trees, and you gifted them with your own devotional service. Therefore, please also bestow upon me your own prema-bhakti. This is my exclusive longing. I have no desire for any other type of liberation.

In this way, by the attributes of pure ecstatic love (prema-visesa) one becomes infused with supreme longing and prays for direct audience with God (saksat-darsana).  From the attributes of that prayerful longing arises ecstatic loving service (prema-bhakti), which demonstrates the supreme rarity of saksat-darsana. This prema-bhakti is verily the only means for attaining Krishna’s darsana. In this verse, after first establishing this as a fact, a prayer is then offered.

If one does receive the direct vision of Krishna but once, the mind is unsatisfied, and (due to not seeing him the very next second) the agony of separation sets in. That such an anxiety perpetually brings the Lord under one’s sway is a feature of prema-bhakti, which is the one and only means of maintaining such a condition. This being the case, then how could it possibly be accomplished by such an utmost offender like me? The answer to this concern is that Sri Bhagavan’s quality of bhakta-vatsalya (affection for his devotees) makes the impossible quite possible. In order to resolve this for certain, the proposal of moksa is again rejected here in the seventh verse, and a prayer is made purely for attaining prema-bhakti.

The words “baddha-murtya” indicate that Sri Krishna’s vigraha (divine bodily form) was bound with ropes tied to the grinding mortar by Sri Yasoda, and by that sri vigraha he liberated the two sons of Kuvera. Thus by dragging the mortar between the two trees known as yamalarjuna, Bhagavan personally demonstrated the supreme fortune that comes from seeing his form, personally touching his form, and so forth, all of which are integral attributes of his supremely beautiful pastimes. The word “mocitau” denotes that the sons of Kuvera were liberated not only from the curse of Sri Narada, but from samsara as well; they were not awarded with kevalam or impersonal liberation of merging into the Brahman effulgence, but it is definitely stated that they were gifted with prema-bhakti.

These two boys are described as “bhakti-bhajau,” they took shelter of bhakti as the supreme goal. Those who cannot give up the shelter of devotion in any way are called bhakti-bhajam. Here it is the intention of the author to specifically declare that not only were they liberated, but that they were also awarded with prema-bhakti. In this regard, Sri Krishna spoke the following to these two boys in the Bhagavatam: “The sprout of prema for me, which was your most supremely cherished goal, has now fully arisen in both of you. From this ecstatic mood, you will never take birth in the material world again.” (10.10.42) In other words, Krishna is saying that “The most desired thing you have prayed for is parama-bhava, and you both have fully developed this prema for me. Therefore you will never again experience the repeated birth and death in the material world, nor will you feel the misery of samsara even while living here.”

Beginning with “tatha prema-bhaktim svakam,” the prayer petitions that Krishna please “bestow upon this insignificant soul that same prema-bhakti that was given to the sons of Kuvera. Other than iha, this goal called prema-bhakti, I have no eagerness for any other type of liberation, O Damodara (na mokse graho me asti damodara)! One may think, ‘If the samsara is destroyed by engaging in prema-bhakti, let it be,’ or, ‘If prema-bhakti doesn’t destroy the samsara, then let me not cultivate bhakti.’ I truly have no inclination for either mentality.” The lesson is that if a cintamani stone lies in the palm of your hand, then all activities you undertake will be perfect; therefore what is the value of grasping a tiny, insignificant thing (like moksa)?

The statement “prema-bhaktim svakam me prayaccha” can also mean that Bhagavan’s belly is bound with ropes, so from him one prays for prema-bhakti in order to perpetually bind his belly; the eagerness for this reciprocation makes it actually possible. Apprehending such, the prayer continues (na mokse graha, etc.), wherein the alarmed devotee questions, “Do I not have eagerness for you to become liberated from the ropes?” and answers, “Yes, I certainly care, but all I want from you (in your bound up form) is that you bestow my most cherished benediction of prema-bhakti. Yet another meaning is the word iha indicates “please bestow prema-bhakti here in Vrindavana.” To interpret further, one prays thus because Sri Vrindavana is the exclusive agent for the arising of prema-bhakti‘s unique happiness, also, only in Vrindavana Sri Krishna especially appears; also, the attributes of his saksat-darsana are found there in that form with his belly bound; and further, one prays for perpetual residence in Vrindavana because only there does Sri Bhagavan desire to especially manifest as the enjoyer of the forest—Vrindavana-Vihari. All this is additionally evidence.