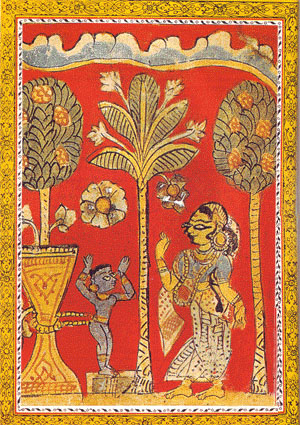 In this way, to he who perpetually drowns the residents of Gokula in pools of pure bliss; who informs those devotees desirous of knowing his supreme opulence and majesty that he is naturally conquered only by his loving devotees, I again offer my obeisances with love unto that Lord Damodara hundreds and hundreds of times.

In this verse, the excellences of Krishna’s guna-visesa (attributes of his qualities) are expressed, beginning with the word “iti“. Iti depicts the reason for his coming under the sway of his devotees, and also means “by this Damodara lila.” It also connotes idrsibhis ca—”by all Sri Krishna’s supremely enchanting childhood pastimes like the Damodara-lila.” The word “svasya” indicates his own uncommonly divine pastimes, lilabhih. By all his sportive pastimes he drowns all the living beings of Gokula in ecstasy. This is confirmed by many statements of the Bhagavatam such as the following:

‘If you dance, then we will give you a sweet.’ By these words, or by clapping their hands, the elder gopis sometimes induced Sri Krishna to dance. Thus Bhagavan, the Supreme Personality of Godhead, danced just like an ordinary child. Sometimes they made him sing, and he therefore sang just like a bewildered innocent boy. In this way he came under the control of the cowherd women exactly like a wooden puppet on strings. Sometimes his relatives would order him to bring their shoes, chair, or measuring pot; however, if he was unable to lift the article called for, he would grasp it firmly and, just to please his dear relatives, flap his elbows again and again to demonstrate his childish strength.1

On the basis of these conclusions of the Bhagavatam, it is further stated, sva-ghosam refers to all the living beings dwelling in Gokula, and ananda-kunde nimajjantam indicates that he immersed them in a deep pool brimming with liquid bliss mellows (ananda-rasa-maya-gabhira-jala). Therefore it is declared in the Bhagavatam verse quoted above, “svanam pritim samudvahan“—by these actions he stimulated the complete love (priti) of his own dearmost relatives. The word “ghosah” additionally means “the loud proclamation of his glories.”  Similarly, the word “sva” also connotes either svasya or svanam, that either his own glory or the glory of the gopas and gopis is proclaimed by these pastimes. In this mood Krishna personally drowned them all in pools of bliss (ananda-kunde nimajjantam) and they experienced a very special excellence of supreme happiness (parama-sukha).

Unto those who are attached to knowledge of the Lord’s majestic opulence (aisvarya), and who worship him accordingly, he declares, “bhaktair jitatvam,” only in front of his own pure devotees does he become totally submissive, being conquered by their love. The word “akhyapayantam” reveals that Krishna has fully displayed this quality of submission to his devotees for all to see. Krishna thinks, “I willingly become submissive to the control of my servants who are attached to bhakti, but I can never submit myself to those fond of jnana.”  This is confirmed in the Bhagavatam thus: “Bhagavan Sri Krishna has proclaimed to the bhaktas of the universe who are fond of aisvarya-jnana that he is fully submissive only to his own pure devotees.”2

This verse confirms that Krishna displays the quality of submission to his devotees only in front of those who are already aware of the prabhava, or power, of his most dear, favorite devotees; he does not exhibit this feature to others. The reason for such behavior is that those who are unaware of the special glories of the Vaishnavas, and those who cultivate kevala-jnana (impersonal knowledge), are unqualified to be presented with a display of the supremely confidential truth regarding devotion and its glories. In this mood, a further meaning of tad-vidam in the above verse leads to bhrtya-vasyata-vidam, or those who are unaware of Sri Krishna’s quality of submitting to his devotees.

Now (in Damodarastakam) the word ” prematah” denotes “with an excellence of love and devotion”; satavrtti means hundreds and hundreds of times, tam, unto that Isvara, and punah vande—I repeatedly offer my respectful obeisances. Therefore the only thing worshipful for me is to offer my obeisances unto the superexcellence of the process of bhakti, which brings the Supreme under the control of his devotees. Such a condition can never come about through aisvarya-jnana, or knowledge of his divine majesty. This alone is the mood of the devotee offering this specific prayer.

Listen to Swami Tripurari‘s discussion on verses two and three of Damodarastakam.