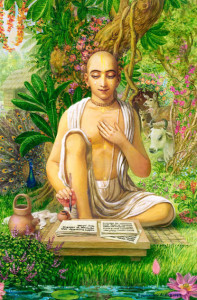 By Satyanarayana Dasa, originally published at The Jiva Institute.

Question: Thank you for your reply. You have raised some interesting points. My understanding is that Jiva Gosvami ultimately admits that there is no harm in thinking that Bhagavan’s knowledge of material misery is an indirect cause of Bhagavan’s compassion. The direct cause is His compassionate affection toward His devotees, who do feel compassion for samsarins, desiring to give them bhakti. Thus God’s compassion primarily touches samsarins through the compassion of His devotees.

Yes, Advaita Acarya is a devotee, but He is God in the disposition of a devotee, as is Mahaprabhu. And in their lila they conceive of themselves as sadhakas. Perhaps this is what gives Krishna dasa Kaviraja and others the sense to describe them as having compassion for samsarins in terms of desiring to bestow bhakti upon them. There are several statements of Krishnadasa that on their face appear to contradict the theology of Jiva Gosvami. Here is another example from Visvanatha Cakravarti Thakura (VCT) in his commentary on Srimad Bhagavatam (SB) 11.5.34:

“Going to the forest, what did He do? He sought out persons who were chasing the form of maya—wife, sons, and wealth. He pursued men who were absorbed in samsara. Out of great compassion (dayitaya) He desired to touch such persons drowning in the ocean of samsara by embracing them (svabhipsitam), in order to drown them in the ocean of prema. This indicates Ṡri Caitanya’s causeless mercy.”

So it is statements like this that I am trying to harmonize with the theology of Jiva Gosvami, statements that describe Mahaprabhu/Advaita Acarya as being motivated by compassion for the plight of the jivas in samsara (out of knowledge that they are suffering and have the potential to taste bhakti) with a view to bestow bhakti upon them. So perhaps as much as devotees are motivated to bestow bhakti on such persons in this sense, when Bhagavan becomes a devotee, He does as well.

However, other than Gaura-lila, VCT and others appear to have contradicted Jiva Gosvami on this subject. Here is an example from Sarartha Darsini:

“The cause of His mercy is that He is the witness (drasta) of the jivas, seeing the jivas who have fallen into the ocean of suffering through repeated birth.” SB 9.24.57 (VCT)

“The action in the form of glance of the Lord (puṁsaṁ) upon prakrti (maya-cesṭitam) for creation, maintenance, and destruction of the jivas’ bodies, is certainly (hi) because of His mercy. What then to speak of His activities such as lifting Govardhana, which are completely devoid of maya? The Lord’s mercy consists of glancing over maya, thinking, “Let the jivas get their material enjoyment after attaining material intelligence and senses!” But how can this be mercy? The jivas, by enjoying material objects and undergoing creation maintenance, and destruction of the universe, simply experience suffering. He acts so that the jivas become detached from the world and its enjoyments, by bhakti, jñana, and vairagya, and so that the jivas can attain the Lord (atma-labhaya). Without intelligence and sense, the jivas cannot attain bhakti or jnana. The cause of the creation of the world is mercy to the jivas.” SB 9.24.58 (VCT)

Notably, Jiva Gosvami himself cites these verses in the context of establishing his theology on this point, albeit with a different understanding.

In closing, I am not sure you will agree with the way in which I have tried to harmonize the many statements concerning Mahaprabhu’s compassion with the insights of Jiva Gosvami. Your idea that Mahaprabhu comes to the world because of His devotee Advaita Acarya’s call and desire to bestow bhakti is included in that, but personally I think that something more needs to be said, hence my effort and inquiry. As for comments unrelated to Gaura-lila like those of VCT above, it would seem that he feels more strongly about the idea that knowledge of the jivas’ suffering is an indirect cause of Bhagavan’s compassion. He comes to the world or manifests it primarily for His devotees and secondarily for the sake of bestowing bhakti on non-devotees, which in turn works well with the sense that Krishna primarily comes to the world to taste the bhakti of Radha and secondarily to bestow bhakti.

Answer: My simple reply is that Jiva Gosvami discusses this point of compassion in his Sandarbhas quite thoroughly. In Paramatma Sandarbha and in Bhakti Sandarbha, while investigating the cause of the manifestation of bhakti in a conditioned being, he concludes that it happens only by sadhu sanga. He is doing this to explain to us that bhakti is not dependent on any material cause. A very important principle of the Gaudiya school is that bhakti is not a product of any material action. This is also the principle accepted by the Bhagavata and explained by Rupa Gosvami in Bhakti Rasamrta Sindhu. Therefore, if it were accepted that God’s compassion, which is really bestowing bhakti, is inspired by seeing the material misery of a living being, it would go against the principle that bhakti is its own cause.

VCT in his Madhurya Kabambini has done an elaborate analysis that bhakti is only caused by bhakti. So it will be hard to accept that VCT is contradicting himself in the commentaries that you have referred to. You have to understand his commentary keeping in mind that he accepts bhakti as not being caused by anything else.

God may come to help the suffering jivas in the material world, but Jiva Gosvami’s point is that He is not moved by their suffering. He comes by His own will, otherwise, He would become controlled by suffering.

If VCT’s commentary on SB 9.24.57 is understood to mean that He comes to alleviate the suffering of the jivas, then the natural question that arises is why the jivas are still suffering and why He does not give His bhakti to all the jivas and make them free from suffering? This is the question that Jiva Gosvami himself has raised in Paramatma Sandarbha.

There are only two possible answers to this: Either God is not capable of giving bhakti to all and gives it only to a few or He does not give bhakti just because the jivas are suffering. Jiva Gosvami accepts the second option.