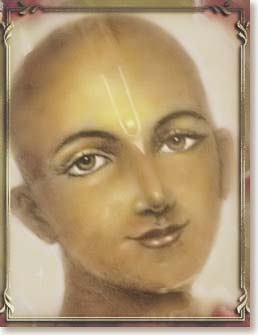 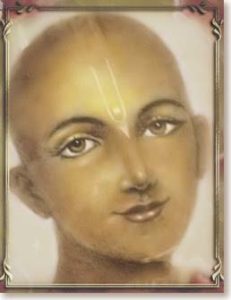 A better question is how can we compare the perfect object of love with perfect love itself, other than in terms of how the two complement one another? If there is a sacrificing aspect of the Divine, there must also be a corresponding aspect of the Divine for whom the sacrifice is intended. For whom did Christ sacrifice? Only a vague conception of the Godhead gives rise to the assertion that it is ourselves for whom Christ carried his cross. Yes, in theory, the sinners of the world are the beneficiaries of Christ’s sacrifice, but it is God the father for whose pleasure Christ underwent the crucifixion, even when the father’s joy in this scenario lies in the salvation of sinners. Christ represents the intermediary between God and humanity, and his life aptly illustrates the fact that it is sacrifice by which we come to meet our maker. Thus in Christ, the Divine teaches us “the way” more than he does the goal.

Krishna, on the other hand, has more to do with the goal. Krishna represents the receiving end of our sacrifice, for whose pleasure it is undertaken. Nothing vague here, but at first glance, this may appear problematic. The specificity inherent in the Krishna conception of the Godhead may appear to be a limitation, a partial expression of an indeterminate Absolute, or, to the average Christian, an attempt to put a face on God the father who is more accommodating when faceless. This, however, is not what Gaudiya Vaishnavas have in mind when in ecstasy they utter the two syllables “krish na.” In our estimation it is a lack of philosophical determination that limits the Absolute by describing it as indeterminate. Indeed, the Gaudiyas envision a very Catholic infinite: infinite beauty, infinite charm, and even infinite form. Krishna is the beatific vision and more.

The specificity of the Krishna conception of Godhead is hardly a limitation. With regard to the way of sacrifice leading to love, such specificity enhances our capacity to love and to sacrifice for the pleasure of the Godhead. The details concerning the Godhead found in the Krishna conception are compelling. Knowing them, what will one not do to secure his pleasure? Conversely, the vaguer our conception of the Absolute is—the less positive content we know about the Godhead—the more we are limited in our effort to love God or the world around us. We are left with merely abandoning false love, the exploitation that poses as love in this world. There is no doubt love in refraining from taking, but there is little giving in such an approach. We may give to those in need, but as important and glorious as such noble acts are, they appear paramount only as long as our conception of the Absolute remains vague or faceless. As much as the Godhead takes shape we gain acquaintance with the world beyond the moral realm. At the same time, because living a moral life with compassion for others is conducive to the culture of the internal meditative love of God that grants entrance to the world beyond time and space, good and bad, etc., one pursuing it does not lack the impetus to live ethically and compassionately in this world. Indeed, devotion to Krishna may provide more impetus for right livelihood than that derived from a vague conception of the Absolute or a faceless Godhead.

How then does the specificity of the Krishna conception of Godhead limit one? Furthermore, under scrutiny, it is apparent that revelation, in speaking about the form, attributes, and pastimes of Krishna, is talking about an infinity of form, attributes, etc. In the tenth chapter of the Bhagavad-gita, Krishna speaks of the splendor of the world as being representative of his person. Hearing this one is to imagine just what kind of person he is. How is it that the world is within his form? This is the question that Arjuna ponders and to which Krishna answers by manifesting a mystic vision of the universe within himself. Reality is a person—Krishna.

The Christ conception represents “the way” in the sense that the way is sacrifice, out of which love arises. The Krishna conception represents that for which we not only should but must sacrifice, compelled by the Godhead’s irresistible attributes, etc. depicted therein. At the same time, within the Krishna conception we find Sri Krishna Caitanya, the sacrificing half of the equation of love, Krishna endowed with Radha’s love for himself. In this manifestation of the Krishna conception, we also find “the way” personified. Sri Krishna Caitanya did not die on the cross, but he did forgo the love of Visnupriya, a love that was arguably more painful to renounce than enduring the pain of crucifixion. Bearing the cross of prema in separation, Krishna comes to us as Sri Krishna Caitanya, a barefoot mendicant dressed only in loincloth, homeless and enduring hardship. Not only is his sacrifice unbearable for those who understand it, the measure of his gift of prema given to the world is so great that it makes salvation seem insignificant in comparison.