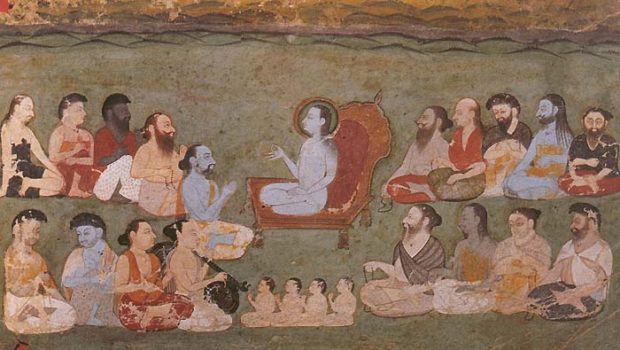 Setting the Stage for Srimad Bhagavatam 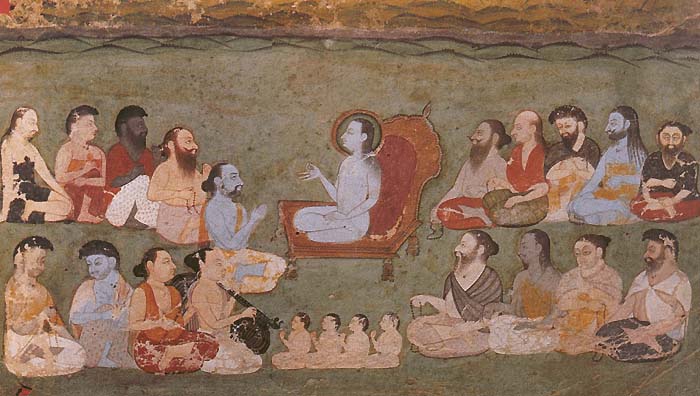 All the top sages and saints were assembled on the banks of the Ganges, and Pariksit Maharaja put forth the question, “Death is sure for me within seven days. How can I utilize my time? You are so many authorities, and by the grace of the Lord, you have fortunately assembled here. I am at your disposal. Help me, that after this certain death I may attain blissful life.”

Then, according to their stages of realization, they gave advice. Some said yoga (meditation), some recommended tapasya (religious penance), some dhanam (charity), and so one.

But Pariksit Maharaja again very humbly submitted, “Please give some unanimous verdict so it will be easy for me to follow your advice.” They were discussing and consulting amongst themselves, but differences were going on in their opinions. At that very time, Sukadeva Goswami appeared.

A young man of sixteen, without any dress—naked—but a good figure; beautiful, stout, and strong. Appearing as though half mad, he entered the assembly. Some boys ran behind him, throwing dust and this and that, just as to a madman. The whole assembly stood in respect and the boys disappeared. All conjectured, “This must be that Suka about whom we have heard but not had the chance of seeing. Perhaps that boy has come?” So all rose in respect, and then they could recognize him. Vyasadeva was also there. So Sukadeva Goswami was welcomed, and unanimously he was given the chair of the speaker.

Then all the leading gentry of religious India of the time unanimously said, “We are all very eager to hear from this you. Maharaja, you are greatly fortunate. Your fortune has attracted Sukadeva; so put questions to him, and let us all hear submissively. We have got a very good opportunity, and we want to hear him speak. We have waited for a long time to know his realization. In his eyes, there is no distinction of man or woman. Women do not see anything in his eyes that they feel the necessity of shyness. Such is his vision, which is not fixed in any worldly plane. There is no charm of any worldly thing in his heart. His eyes, his everything is meant for something transcendental. So we are very eager to know his realization.”

Sukadeva Goswami also gave his own introduction. He expressed his own position: “parinisthito ‘pi nairgunye: I was standardly trained in transcendental knowledge, and I am established there. But, uttamah-slokalilaya grhitaceta, my attention has been forcibly snatched to some higher cosmos, above the transcendental impersonal conception.”

Generally, the philosophers of this world take the transcendental to be impersonal. Infinite and zero are of the same characteristic. So it is an area in which we cannot have any entrance as a subject for investigation. The subject has its stand far below; he can only conjecture some hazy thing. This is the position of the jiva soul. So his view is only something cloudy, like the sky. So the spiritual sky is also seen as one sees an infinite blue sky, that is, Brahma. Non-differentiated, non-specified, infinite space that we cannot have any practical experience of. Nirguna. That is the summation of all negation. To us, the positive experience is confined only to this world. This ear-experience, this eye-experience, touch-experience, etc. Our property here is the sum total of these experiences and something drawn from the mental world. This is saguna. And all this experience fails to have any conjecture of that background, which is nirguna. All experiences are absent there. The positive knowledge of our experience is completely absent there. So that is nirguna—or so we are told by the philosophers of this world.

But then there comes uttamah-sloka lilaya. Nothing mundane is to be traced there. This is beyond all conceptions of ignorance, beyond misconception. Sloka means charitra, ‘conduct.’ A flow of life is be traced there which cannot be compared with anything of this mundane jurisdiction. A higher conception of life, rather, the highest conception of life. Sukadeva said, “I am captured totally by the charm of that sort of life, that sort of pastimes, that sort of flow of nectarean activity. I have come in connection with this—grhitaceta rajarse—my understanding has been forcibly carried and engaged there. I can’t come away; I can’t come down from that charming land. Ukhyanam yad dhitavan, so I had to come to my father Vedavyasa. Before this, he tried his best to take me to that direction, but I didn’t care to know about it. I had to return to my father, and as a regular student, I had to study the ways and nature of that higher entity.

Tadaham te ‘bhidhasyami mahapaurusiko bhavan. “Maharaja Pariksit, you are a great personality, and it is befitting you have the highest prospect of life, the highest end. You are fortunate to receive that sort of attainment. I shall just try to give you the news of my experience of the transcendental lila of the reality the beautiful, divine love.”

With this introduction, Sukadeva began to deliver his lecture, which continued for seven days. Through different questions and answers, Krishna lila was established, and all the religious authorities of the time very submissively gave their hearing to the teachings of Sukadeva Goswami in the form of Srimad-Bhagavatam.

One Response to Setting the Stage for Srimad Bhagavatam