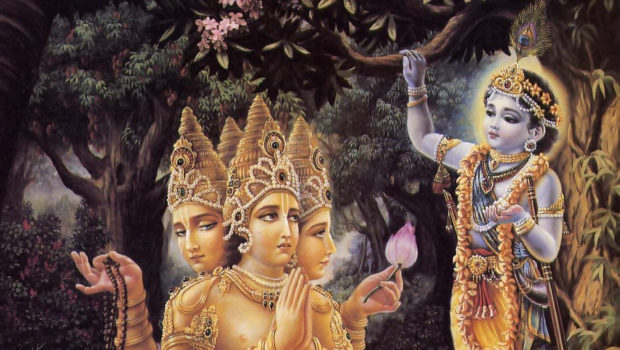 The great Bhaktisiddhanta Sarasvati Thakura composed a Bengali verse that represents the very spirit of his approach to the raga-marga. The occasion for its composition was the building of the famous Bhaghbazar Gaudiya Matha, an opulent for its time marble temple constructed in Calcutta. His disciples, like materialists, concerned themselves with raising funds and all of the mundane activities surrounding the construction of the temple. His sannyasi disciples went door to door to raise money that in turn was thrown at the Deities feet in the context of building them a lavish temple—raga-marga Deities, Sriman Gaurasundara and Radha-Krishna. The spirit of this seva was reverential worship not of Narayana, but rather reverential worship of the raga-marga itself, with the idea that sadhakas giving proper respect to this highest of ideals would in turn cause its ragatmikas to take notice of them and give them entrance into this realm, crossing over such reverence.

Below I cite the Thakura’s Bengali verse followed by a translation of the verse that includes an explanation of its implications:

Devotees reveling in the intoxication of offering the desirable things of this world in glorification of and with reverence for the ideal of raga-marga bhajana will thereby remove all worldliness from their hearts by such divine seva, and in turn their reverence will be broken as actual raga-marga participants—ragatmikas—attracted by their attitude will reach down and bring them within their fold.

After the Thakura’s passing, Bhakti Sundara Govinda Maharaja suggested that the word “vinaya” could be changed to “kirtana,” a suggestion that met with the approval of his guru, the founder of Sri Caitanya Saraswata Matha, Bhakti Raksaka Sridhara Deva Goswami. As such, this edition of the Thakura’s verse was engraved in stone over the Caitanya Saraswata Matha temple Deities, Sri Gandharvika Giridhari and Gauranga. Here “kirtana” refers to the dynamic outreach of Bhaktisiddhanta Saraswati, who in his glorification of the raga-marga spoke the majority of the time about what it was not, given that this high ideal lends itself to being misunderstood.

Thus Bhaktisiddhanta Saraswati Thakura taught his followers to glorify the example of the ragatmikas, in whose hands the purna brahma has become an intimate friend on equal terms. In doing so, his disciples, in humility, felt themselves lacking qualification to directly participate in higher aspects of raga-marga bhajana, and instead appealed through their kirtana to the ragatmikas for their grace resulting in increased eligibility to tread the marga themselves. Thus, they differentiated themselves from those who felt their budding lobha at best qualified them to engage in such practices and in doing so sometimes set a morally compromised standard that cast a shadow on the precepts of Mahaprabhu, misrepresenting the high ideal of raga-marga bhajana. However, in doing so his disciples were not to lose sight of the aim of their dynamic kirtana—raga-marga—and become proud of their preaching accomplishments, sectarian, and offensive to other Vaishnavas.

In consideration of the above, I have selected the central verse from Brahma’s prayers that exemplifies such reverence of the raga-marga with the ideal of sakhya-rati in heart and mind. It can be incorporated into one’s sakhya-rati bhajana in consideration of the Thakura’s Bengali verse and overall approach outlined above, assuring one’s increased eligibility. First I will cite it, and then I will explain it in a number of ways drawing on the numerous times it has been cited and commented upon by our Gaudiya acaryas, culminating in how its composition renders it an example of rasollasa and how this rasollasa understanding of the verse makes it a suitable prayer in reverential glorification of sambandha-rupa sakhya-rasa with the desire to attain this same ideal oneself.

First the general meaning of the verse:

“O how fortunate! O how fortunate are the people of Nanda Gopa’s Vraja. He who is the purna brahma, the paramananda, has become their eternal friend.”

In this verse the word “paramananda” speaks both of Krishna as the giver of friendship in prema and also, because it follows the word “mitram,” “paramananda” can be understood to qualify friendship as the highest bliss. It is he who is the highest bliss himself—Gopala Krishna—and he alone who gives this kind of bliss. Other forms of the Godhead are also forms of bliss and give prema, but they are not the highest forms of bliss and as such cannot give the highest prema, the bliss of friendship that permeates Vraja. In his Krama-sandarbha Sri Jiva Goswami explains,

Anandam is in the neuter gender for metrical reasons. It suggests that which the sruti states: vijïanam anandam brahma: he is knowledge and bliss. (Brihadaranyaka Upanishad 3.9.32) There is a little ananda in other forms of Bhagavan and as such there are numerous givers of prema. However, ananda itself is not the giver in such instances. But bliss itself—Krishna—bestows prema on the people of Vraja. This is to be known from the sruti alone. Parama combined with ananda indicates extraordinary sweetness, like the highest sweetness in the most concentrated form of cane—from molasses to sugar candy. This is both good fortune and astonishing.

Furthermore, this ananda is sanatana, mitram paramanandam sanatanam—the bliss of eternal friendship, not temporary bliss. Thus it is worthy of attainment, unlike that which is only an appearance and cannot be relied upon to endure. It is not like the illusory attainments of this world. There is oneness between Krishna as paramananda and the friendship he shares that is also paramananda—oneness and simultaneous difference. Krishna is the object of eternal fraternal love and his existence as such depends upon the eternal existence of such love in the form of his friends—nitya-siddha krsna-prema sadhya kabhu naya. Our goal, our ideal, must be eternal and faultless. Here Brahma acknowledges that this is the case with sakhya-rasa.

The all-pervasive, yet invisible Brahman is thus not paramananda, but Krishna as purna brahma is. And the creator Brahma is astounded at his good fortune to actually see Brahman manifesting in a charming form that is not less than Brahman itself but rather the most complete form of Brahman—purna brahma. This Brahman—Krishna—is full because in this form Brahman tastes and gives the highest bliss—mitram paramanandam. Just as mukti with form is more blissful than formless mukti, similarly the object of love for the mukta with a spiritual form is more blissful than formless Brahman. This is the general rule. However, the words “purna brahma” indicate not only Brahman with form but moreover he who among the many forms of the Godhead has the most complete form, he alone who is rupa-madhurya.

In his astonishment that is underscored by its repetition—aho bhagyam! aho bhagyam!— Brahma also indicates that he himself is beginning to experience preyo-bhakti-rasa. In his commentary on this verse in Sri Rupa’s Bhaktirasamata-sindhu, where Rupa Goswami cites it to illustrate that there are nitya-siddha devotees, Sri Jiva states that Brahma’s repetition here is not faulty because it expresses transcendental wonder, and Vishvanatha Cakravarti describes Brahma as full of bliss and wonder as he speaks this verse.  The basis of rasa is a sense of wonder—camatkara. Camatkara is the expansion of the heart—citta vistara—and the supernatural artistic delight derived from contemplation of the beauty of Krishna, his form, qualities, and lilas.

When we examine this verse in the context in which it appears in the Bhagavata we understand that while the verse speaks in a general way as to the good fortune of Nanda Gopa’s cowherd kingdom that is the very abode of intimate friendship not found elsewhere, friendship that extends down to touch this domain’s dasya, up in sankula rati to also touch its vatsalya, and ultimately to mingle with its madhurya, it is more precisely a statement in which Brahma expresses his own budding sakhya-rati in glorification of Krishna’s intimate friends.

In his comments on Brahma’s prayers, Vishvanatha Cakravarti Thakura states that in his prayers to Gopala Krishna, Brahma, who was previously treading the vaidhi-bhakti-marga, is now longing for raganuga-bhakti. Regarding the specific verse under discussion he comments further, “After praising the Vrajavasis with ragatmika vatsalya prema (in the previous verse, SB 10.14.31), in this verse, Brahma, in the context of praising those with ragatmika sakhya prema in particular, also praises all those relishing other intimate relationships with Bhagavan.” In other words, this verse, while speaking in general about the fortune of all of the residents of Vraja and how they are to one extent or another touched by sakhya prema, under scrutiny is more specifically aimed at glorifying sakhya prema itself and the young cowherds who personify it.

Sanatana Goswamé comments that, “Brahman is herein described as the friend of Sridama and the other cowherd boys.” These cowherds are the asraya-alambana–vibhava of sakhya-rasa that Brahma witnessed playing in fraternal love with the visaya-alambana–vibhava of sakhya-rasa—Gopala Krishna—now standing before Brahma. Thus here Brahma prays respectfully for that same rasa, the seed of which he received at the dawn of creation. Similarly, commenting on the bhakti anga of sakhyam in Bhaktirasamata-sindhu, Jiva Goswami cites this verse as an example of a sadhaka identified with the anga of sakhyam. In this case the sadhana is sambhandanuga. Thus Brahma’s verse praises nitya-siddha sakhas of Vraja in the spirit of attaining this ideal oneself.

Finally, in his Priti-sandarbha Jiva Goswami characterizes this verse as an example of rasollasa, or the exultation of sakhya-rasa as the highest bliss by virtue of the cleverness of Sukadeva/Brahma’s use of words that at first glance appear to constitute an incompatible mixture (ayogya sangati) of reverence and sakhya-rati. Ordinarily such an incompatible combination would result in rasabhasa. However, in this verse rather than the undesirable rasabhasa we find the most desirable rasollasa.
Previously Sukadeva was a brahma-vadi, and thus his citta was still slightly influenced by his previous jnana-bhakti samskaras, despite coming under the Bhagavata’s influence of raga-bhakti.  Given this internal background, his use of the reverential Upanishadic words “purna brahma” in glorification of sakhya-rasa arise. However, his clever use of such words in this verse (bhangi-visesa) aimed at glorifying sakhya-rasa lead to the experience of unprecedented wonder—camatkara—in his heart, as it did in Brahma’s heart. It is indeed wonderful that the purna brahma has become a friend on equal terms with the young gopas of Vraja! And this is accomplished by the power of the cowherds prema. As such we bow before them with the confidence that, given their very generous and benevolent nature, they will grant us access to their inner circle in due course. May the whole world know such a possibility exists—aho bhagyam!