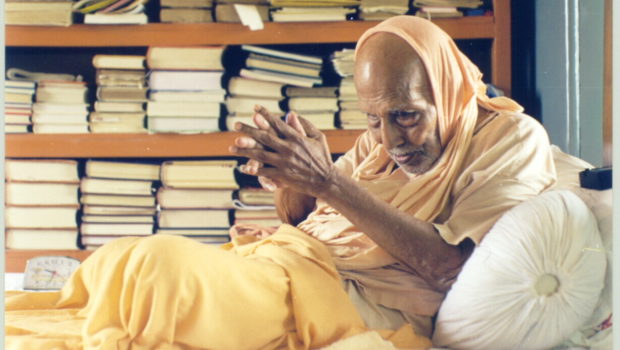 Once Srila Bhaktisiddhanta Saraswati Thakura Prabhupada was viewing the deities of Sri Sri Guru Gauranga-Gandharvika-Giridhari at the Sri Caitanya Math, standing on the front porch of the temple. The door of that temple is not very wide and Srila Prabhupada did not have his glasses on.

Standing next to him was one of his dear disciples. The disciple thought perhaps Prabhupada could not view the Deities very well through the narrow doorway. He said, “Prabhupada, this doorway is not very wide. So it is not possible to view the Deities very well from inside.” Hearing this, Prabhupada smiled, and he said for the benefit of all of us, “We should not think of the Supreme as an object of our vision. Instead, we should meditate on the thought of how we can acquire some qualifications so we can become worthy objects of his vision. We should think about whether he wants to see us, and whether he will want to reveal himself to us.

“The holy name, form, qualities, and pastimes of Sri Krishna are divine and transcendental. They cannot be experienced by material senses. Bhagavan manifests himself spontaneously on the tongue of a devotee who is eager to serve Him.” (Bhakti-rasamrta-sindhu, Eastern Wave 2.109)

For many days I have been watching the road for you, and I have been wondering, ‘When will Madhavendra Puri come here to serve me?'” (Sri Caitanya-caritamrta Madhya-lila 4.39)

In this way, Bhagavan, who succumbs to his devotee’s love, waits to see his devotee with great eagerness.

“The Lord will grab food from His devotee, but He will not even glance at anything given by a non-devotee.”

This is why the eagerness to serve him in loving devotion has to be present.

Srila Prabhupada’s loving devotion for the lotus feet of his gurudeva is beyond our comprehension. At one time he told us of his experience meeting his gurudeva:

When I used to think that I was a big scholar of mathematics and philosophy, by my good fortune I got darshan of the lotus feet of Sri Gurudeva. He ignored everything that was previously appreciated in me by others: my truthfulness, my moral and pious life, and my scholarship, knowing them to be of little value. When he ignored whatever was good in me, I realized how good he himself was, he who could ignore so many “good qualities” in me; what inconceivable wealth there was in him. Being ignored by him, I realized that there was no one more fallen than me, more contemptible than me, and that this was my real identity. This great soul did not consider the things which I considered to be highly desirable, such as scholarship and pure moral character, to have any value. Then I realized what was in this great soul was absolutely priceless. I prayed very humbly to Bhagavan for his mercy and later realized that without receiving the mercy of this great soul and serving him, nothing good could happen to me.

When I realized that and acted accordingly, by taking shelter of the lotus feet of Sri Gurudeva and by receiving his unlimited causeless mercy, I considered my life fulfilled. I have understood that if the people of the world do not receive the same jolt that I received from my gurudeva, then their consciousness will not awaken.

Therefore I am telling everyone, ‘I am more stupid than anyone else in the world; please, all of you, do not be stupid like me. Do not live your life within the limitation of a calculating consciousness. Please enter the realm of the unlimited, and you will become very wealthy. I am only asking you to accept that which I have understood, by the causeless mercy of Bhagavan, to be supremely beneficial.’

In another place he wrote:

Even after seeing Srila Gaura Kishore Das Babaji, many people, the immature and the clever, the young and the old, the scholarly and the foolish, those lacking devotion and those proud of their devotion, did not have the proper transcendental vision to see him. This is the transcendental power of a pure devotee. Hundreds of people came to him for his instruction, to fulfill their material desires. But that instruction was actually deceiving them. Many people take the garb of sadhus, and many people outwardly act like sadhus, but in reality, not only are they not sadhus, but they are very far from any sadhu. But there is no such impurity in my Lord. By his own example he demonstrated that purity was truth.

His genuine affection was incomparable to anything in this world. He had no dislike for his competitors or his enemies. Even to those who received his mercy, he did not demonstrate any external favor. He used to say “In this world there is no one who is the object of my liking or disliking. I consider everyone to be respectable.”

Another inconceivable thing was that often deceitful, materialistic people whose mood was unfavorable to pure devotion, would surround my gurudeva without understanding his real position. They considered themselves objects of his affection yet kept their attachment to petty things. But he did not outwardly make any effort to get rid of them, nor did he accept them in any way.

On the 29th of October, 1934, Srila Prabhupada discovered the place of pilgrimage where Srila Rupa Goswami saw Sri Gopal in the village of Satigara in Mathura. I remember in 1935, starting from the 8th of October, Srila Prabhupada observed Sri Damodara-vrata on the bank of his beloved Sri Radha Kunda. Every day he gave lectures on Srimad Bhagavatam, Sri Caitanya-caritamrta, Upanishads, and other holy scriptures. Every day he would circumambulate Sri Radha Kunda and would hear or talk about the eight daily pastimes (asta-kaliya-lila). At this time, to properly serve Sri Vraja-mandal, he started regular meetings preaching the glories of Sri Vraja-Dhama (Sri Vraja-Dhama Pracarini Sabha).

How much he loved talking about Krishna is inconceivable. He would talk about him for hours on end, and if anyone asked or even gestured for Srila Prabhupada’s prasad to be brought in, he would be displeased. There were times when his disciples requested him not to talk very much, being so instructed by experienced doctors. If anyone would ask him how he was, Srila Prabhupada would answer, “I am fine. My only disease is that I am not allowed to talk about Krishna.” He would say, “To wake up one sleeping soul, to make one conditioned soul aware of his real identity, one should be willing to give gallons of blood.”

Srila Prabhupada was extremely affectionate to his disciples, and if he found out any one of them was bewildered by maya he would shed tears. In confronting those who had a demoniac mentality, he was deadly like a thunderbolt. Yet in his loving relationships his heart was softer than a flower. In any of his Maths, if any of his servants had to face a difficulty due to lack of money, Srila Prabhupada used to take great care to send that money as soon as he heard about it. He could not bear the thought that a devotee had to undergo hardships due to lack of money. He used to become very concerned if he heard of any devotee being ill. His affection could not be compared with that of millions of fathers and mothers. If we were ever sad and miserable, as soon as we sat near him, all sadness went away due to the shower of his unlimited affection. Even his chastisement seemed very sweet.

“Srila Prabhupada has chastised me,” we would say with great pride, and considered ourselves to be very fortunate. All difficulties in our service were made worthwhile a million times over when we could see the signs of pleasure on his affectionate lotus face. What we felt can be expressed by this verse of Srila Bhaktivinode Thakura in his book Sarangati:

If we could not properly perform some service which had been ordered by Srila Gurudeva, it would cause us great sadness. Our service to Srila Gurudeva seemed to consist of everything: devotion, worship, meditation, realization, austerity, and sacrifice. He was most dear to Krishna. Therefore, if we could somehow bring him some satisfaction, we considered that the highest fulfillment of our devotional practice.

If Srila Prabhupada went away from us for a few days, our hearts would ache in separation. We would think day and night, “When will he come back again?”

Alas! How many years have passed since he left this planet! How am I spending my days in this long separation from him? Why is my soul still living here? For the sake of what kind of happiness? Perhaps due to my offenses to the holy name and at the lotus feet of Srila Prabhupada, my heart has become hard like a thunderbolt and it does not feel any pain anymore. If I really loved him, how could I live this worthless life here? O merciful lord, please protect this fallen servant of yours. Even though I’m so fallen, so sinful, and so deviated from the path of devotional service, please pick me up and put me at the shelter of your lotus feet.

Once you did give me shelter at your lotus feet, considering me the servant of the servant of your servants. We also got the assurance that if necessary, you would come here again and again to rescue the fallen souls, like me. O merciful gurudeva, your heart is so full of affection! Please forgive all the offenses I have committed at your lotus feet, knowingly or unknowingly. The day before you left us, I clasped your lotus feet on my chest, and you looked at me with eyes full of affection. Please remember that. I am stupid, ignorant, bereft of scriptural knowledge; I do not know what is good or bad for me. Please correct me and make me worthy of your service. Please make me understand what my faults are and what my offenses are, so I will have the privilege of serving you. Sri Caitanya Mahaprabhu said to Murari Gupta:

You gave me the Tulasi beads so I could offenselessly take the holy name. But alas, I am still indifferent to that. My worshipable Godbrothers, who are all my wellwishers, have set such examples for me by their own actions, but I was not inspired by that. I do not have the desire to take the holy name, what to speak of having love for the holy name. Have I been deprived of the mercy of the holy name due to my offenses at your lotus feet and the lotus feet of the Vaishnavas? O merciful Prabhupada, please give me love for the holy name. Please inspire me. Let those lotus feet of yours, which I had the good fortune to hold to my chest and which are more cooling than millions of moons, be installed and be worshipped in my heart for all eternity. This is my only prayer to you.