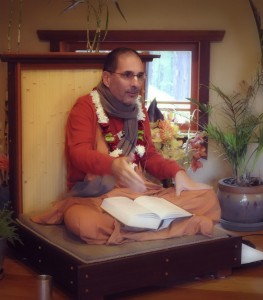 Q. Of all the leaders of Srila Prabhupada’s movement I always considered you to be among the best, as you seem to be open-minded and considerate. However, I was shocked when I read your Sanga on Rama Navami that said Gandhi chanted a political Rama nama that was not supported by proper sambandha (conceptual orientation).

I don’t see the point in criticizing someone as esteemed as Mahatma Gandhi. While your analysis of his chanting may be acceptable from the Vaisnava point of view, what does it accomplish? In my opinion, it will simply cause readers to lose appreciation for you. Overall, if devotees don’t grow up and get over themselves–their arrogance and false sense of self-importance–and learn how to truly respect others; then the public will continue to look down on them/us, and never be open to the beautiful teachings that we have to offer the world.

A. I appreciate your comments, but I don’t feel that I criticized Gandhi; rather, I highlighted the necessity of proper sambandha for those cultivating nama-dharma in the line of Sri Caitanya Mahaprabhu. However, I understand your point that to those not well acquainted with the teachings of Mahaprabhu my words, in this case, might not have been appreciated. Instructors of Krishna consciousness perpetually face this dilemma; that our presentation of the philosophy is too high for some and too low for others. My Sanga newsletter is primarily addressed to aspiring and initiated devotees, so while I may have erred with regard to the general public, I tried in this instance to offer insight to the initiated as to the necessity of sambandha-jnana for success in the cultivation of pure chanting (suddha-nama). With the help of devotees like you, I hope to do better in the future.

But if I may, I do not think that “truly respecting everyone” involves seeing Gandhi, for instance, in the same light as we see our guru, Srila Prabhupada, but rather to see each of them for the uniqueness and greatness of their particular contributions. Having said that, it may be worth noting that the article containing the sentence that you objected to was taken from a lecture wherein I made clear that Gandhi was certainly a great man by political and religious standards. Nevertheless, in Gaudiya Vaishnavism, the ideal established by Sri Caitanya Mahaprabhu is the chanting of suddha-nama. Such chanting is characterized by a lack of interest in sense gratification and worldly affairs. By his own account, Gandhi chanted Rama nama to save his son from death, to fix his printing press, and ultimately to establish his own idea of Ramarajya, the kingdom of Rama. Vaishnavas refer to this kind of chanting as nama-aparadha, or chanting for some type of material gain. Chanting for material gain is not intrinsically wrong or forbidden; indeed, scripture relates that the great sage Narada initially gave Dhruva a Visnu mantra to chant for the fulfillment of his worldly desires. Ultimately the instructions of Narada and the mantra he gave him served to purify Dhruva of all material desire.

Previously Srila Prabhupada had written to Mahatma Gandhi not long before the Mahatma’s death, imploring him to give up politics and join the mission of Sri Caitanya. Among other things Srila Prabhupada advised him in his letter, Srila Prabhupada said, “I tell you as a sincere friend that you must immediately retire from active politics if you do not desire to die an inglorious death.” Then Srila Prabhupada goes on to say:

“Let us have discussion on the Bhagavad-gita. I am sure, thereby, that you shall get a new light from the result of such discussions not only for your benefit but for the benefit of the world at large, as I know that you are sincere, honest, and moral.”

Unfortunately, Gandhi did not heed Srila Prabhupada’s advice; and please note that what Srila Prabhupada is essentially saying here is that one needs proper sambandha in order to perfect one’s chanting. This is what we should expect to hear from sri guru-parampara. At the same time, I agree with you that devotees may tend to overlook the relative greatness of others and the things in their lives that we should see in devotees but unfortunately often do not. If the majority of devotees had the qualities of Gandhi, they would be in a much better position to share the bhakti-siddhanta with others. He was a remarkable man and despite his political preoccupation, which has value in and of itself—he was also interested in genuine spiritual growth. Let me close with these words of his:

“For without prayer, there is no peace. It is so needful for me. When it springs from the heart, prayer needs no speech. It is an unfailing means of cleansing the heart from passion. But it must be combined with an atmosphere of humility. Our prayer is our heart’s step that reminds us that we are helpless without God’s support. The greatest of human endeavor is of no effect if it has not God’s blessing behind it!”

Q. You discussed euthanasia in your Sanga entitled Death and Dharma. I believe that euthanasia or “mercy killing” is an interruption of the destined experience that the soul is required to have. One may attempt to alleviate the pain of a dying person but death is always painful, so isn’t it wrong to interrupt the destined means of one’s death?

A. My reply to a question similar to yours is found in a Sanga called Dynamic Orthodoxy. In that Sanga, I reiterated that I do not endorse euthanasia per se, but I don’t feel that the issue is as black and white as some may think. Therefore I pointed out that in certain circumstances there is precedent in sastra for some form of euthanasia, inasmuch as euthanasia involves what appears to be a choice concerning dying before one’s time. Again, that is not to say I approve of it in today’s world in all respects. I don’t. Your question is about the repercussions of interfering with one’s karmic destiny. Throughout life, we are presented with numerous opportunities to change our destiny. According to Gaudiya Vedanta, we have minute free will. While our will exercised in the past created our present life circumstances, this karmic destiny does not eradicate our will. Valid choices remain as to how to respond to present circumstances that we have created for ourselves by our past activities, choices that in turn will shape our future destiny.

There also may be instances when it is our desire to pass from the world rather than remain in a condition that no longer directly facilitates our spiritual progress, and those close to us may be aware of this and consent to pulling the plug on our life. In this case, carrying out the will of the dying person, a will that could alter his or her destiny, may in some instances alter one’s destiny for the better. It’s possible.  Another point is that death need not be painful, at least not more painful than being alleviated of its pain. However, the pain of death is often more psychological than physical. After all, one can tolerate physical pain if one’s mind is peaceful but no amount of physical comfort can appease one if one’s mind is disturbed. Psychic suffering at the time of death is a result of attachment. So to end attachment is to end suffering; such is the verdict of the scriptures. To end attachment is in a sense to die now—to die to the killing/taking tendency within us–as Srila Sridhara Maharaja was fond of quoting Hegel, “Die to live!”

Q. My desire to develop intellectually as well as spiritually has led me to chanting and studying spiritual literature such as Bhagavad-gita and Srimad-Bhagavatam. However, as an educated modern woman I am disturbed that almost every reference to women in these texts is derogatory. How best to understand this?

A. In previous Sangas, I have discussed this issue many times, but basically, the scriptural texts you are reading were written centuries ago and their teachings are couched in the cultural and social setting of their time. We live in different times and have different sensibilities. Thus it is imperative if we are to take full advantage of the essential message of these texts, that we study them under the realized guidance of someone living in our times. Under such guidance, we will be able to sort out that which is essential and then learn how to apply it in today’s world.

The fundamental message of the Gita and Bhagavatam is that we are souls eternally related to Krishna through love, not that women are inferior to men. However, this message was given in a culture, like almost all other ancient cultures, in which women were considered inferior to men. Indeed, for the most part, there was no system to educate women, and so-called lower class men as well. Thus the texts speak of the need for women to be guided by educated and spiritually advanced men. In doing so the essential spiritual message they stress concerns the need for women (like Kunti and Draupadi) to overcome obstacles and practice devotion to Krishna. In today’s society, the position of women is quite different, but the message of the Gita and Bhagavatam remains essentially the same. That is, in consideration of present social circumstances, women should situate themselves such that their lives are spent in the pursuit of spiritual progress.

Women and the Laws of Manu

Q. One thing I read that disturbs me is that in your sect women are not allowed to renounce the world and take sannyasa. What is your opinion on this?

A. Please refer to the following Sangas for more detailed information on this topic, but in short, my opinion is that any woman has the right to renounce material life at any time. Such renunciation might have played itself out differently in ancient social circumstances, but still, women were not deprived of the choice to renounce. Nor are they today, and should they choose to do so and qualify themselves for such a life, they are free to practice renunciation in a manner similar to that of men in today’s world. Note that even the manner in which renunciation on the part of men is expressed today is largely different than how it was done centuries ago. Today we do not find any sannyasins dressed in tree bark and sleeping under a different tree every night as suggested in scripture.

More on Women and Sannyasa