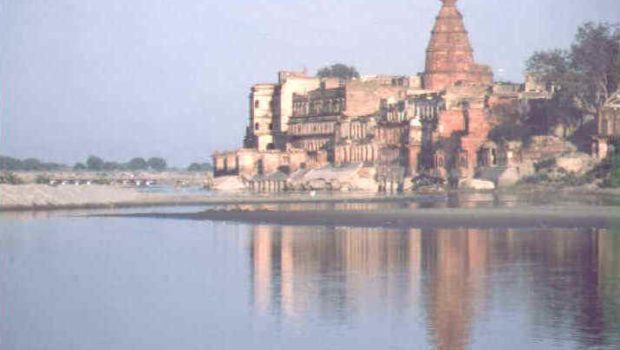 Even though each dhama is infinite and all-pervading, the dhamas are said to be situated one above another. Situated above the mundane sphere, which is graded into fourteen worlds—the seven Lokas and seven Patalas—and beyond the River Viraja, is the Brahmaloka, or Siddhaloka, which is the residence of all the freed (mukta) souls (Cc. Madhya 19.153). Above the Brahmaloka is the paravyoma, where the infinite avataras, or partial manifestations of Krsna, reside, and which is the support of infinite spiritual regions called Vaikunthas (Cc, Adi 5.15). Above all these dhamas is Krsnaloka (Krsna’s abode), which, according to the differences in Krsna’s pastimes (lilas) and associates (parikaras), appears in three different forms—as Dvaraka, Mathura and Gokula (Cc. Adi 5.13). Gokula, the highest of the three, is also called Vrndavana because Vrndavana is the central portion of Gokula.

In the Rg Veda (1.154.6) Vrndavana is described as the highest dhama (paramam padam) of Visnu. The Bhagavatam also describes it as the highest dhama. In the Gita, Krsna Himself describes it as “My highest dhama.”6 It is so described because it surpasses all other dhamas in grandeur (aisvarya) and sweetness (madhurya). But its peculiarity is that its sweetness completely eclipses its grandeur, so that everything here assumes a form sweet beyond expression. Krsna does not appear here as God or even as a king, but as a cowherd boy with the crest of a peacock feather on His crown and a flute in His hand, eternally engaged in amorous pastimes with His consorts on the bank of the River Yamuna underneath the kadamba trees and in the green groves; laden with sweet-smelling flowers, all of which breathe an atmosphere of freedom and sweetness most congenial to Him and His consorts.

It is therefore not possible to think of Krsna’s presence anywhere else. Krsna in Mathura and Dvaraka is not really the Krsna of Vrndavana but His partial manifestation called Vasudeva. When Krsna is said to go out of Vrndavana, as, for example, when He goes to Mathura at the invitation of Kamsa, it is really His partial manifestation Vasudeva who goes there, not Krsna Himself, who remains unmanifest during that period in His manifest pastimes (prakata-lila) in Vrndavana.7

Indicating how Krsna is inseparably connected with Vrndavana in His highest aspect, which fully displays His sweetness, Radha, to whom even a moment’s separation from Krsna is unbearable, is not satisfied to find Him in Kuruksetra, where He appears as a king with His entourage and not as a cowherd with His flute (Cc. Madhya 1.72-73). She is also not satisfied to find Him in Nava-vrndavana, a replica of Vrndavana specially prepared for Her in Dvaraka, because it lacks the atmosphere of freedom and the charm and grace so natural to Vrndavana and is therefore not conducive to the highest bliss She is accustomed to experience in the company of Krsna in Vrndavana.

It is not surprising, therefore, that Uddhava, the wisest of Krsna’s associates, wishes to be a blade of grass or a creeper in Vrndavana so that he may be consecrated by the dust of the holy feet of the gopis.8 Even the great Sankaracarya, who regards the form and pastimes of Krsna as creations of maya, reveals a secret desire to be in Vrndavana so that he may sit on the bank of the Yamuna and pass each long day of his life in the twinkling of an eye, meditating on Krsna:

The celestial Dvaraka, Mathura and Gokula (Vrndavana) have their replicas on earth (in India) in the forms of the geographical Dvaraka, Mathura and Vrndavana, which are known as their prakata-prakasas, or manifest forms. These appear as parts of the phenomenal world to our clouded vision, but are in essence identical with their Celestial counterparts. Here also Krsna is eternally present with Nanda, Yasoda and His other associates and performs His pastimes with them as in the celestial Dvaraka, Mathura and Vrndavana. If we could see them with spiritual eyes, they would without a doubt appear in their true form (Cc. Adi 5.20-21). Even today, while staying in these very abodes and in their very bodies, the devotees who attain accomplishment (siddhavastha) in devotion are blessed with the vision of the divine pastimes of Krsna with His associates; such devotees need not be transported to any other abode or level of existence. When Krsna descends to these abodes, however, at the time of His manifest pastimes (prakata-prakasa), even those who are not devoted can see these pastimes in their true form. Such is the effect of the divine touch of Krsna with these abodes, which otherwise appear phenomenal.

Besides the manifest forms of Krsnaloka, there is also an unmanifest form of it on earth that has the peculiar power of always remaining invisible; it remains on earth without touching it. Thus there are two aprakata-prakasas (unmanifest forms) of Krsnaloka. One is the Krsnaloka situated above paravyoma, which is called by various names: Goloka, Gokula, Svetadvipa, Vrajaloka or Vrndavana. The other is the invisible Krsnaloka situated on earth, which is different from the prapancika, the phenomenal Krsnaloka visible to our material eyes and actually touching the earth. It is also called Gokula or Vraja.

Rupa Gosvami states in Laghu-bhagavatamrta (1.277.78) that Goloka is a majestic manifestation (vaibhava-prakasa) of Gokula, which is essentially sweet in appearance and therefore greater in excellence. As an instance of the majesty (vaibhava) of Goloka, he cites the Varaha Purana, which says that the kadamba trees of Goloka spread out majestically with their hundreds of branches, which is just in keeping with itsaisvarya (opulence), while the kadamba trees of Gokula are medium-sized, which is in keeping with its madhurya (sweetness). A special reason why Gokula excels Goloka in sweetness is that in Goloka Krsna is present eternally without birth, on account of which His pastimes in Goloka differ in certain respects from the sweet human aspect in which they reveal themselves in the phenomenal Gokula. Brahma-samhita describes the pastimes of Vrndavana as nara-lila (manlike pastimes) and those of Goloka as deva-lila (Godlike pastimes). This theory is supported by the rasa dance in Goloka, which Krsna is said in Brhad-bhagavatamrta to have performed on the head of Kaliya Naga, the thousand-headed cobra, although there is no mention of this in the Bhagavatam.

According to Jiva Gosvami also (Gopala-campu, Purva-khanda, 19), Goloka is the majestic manifestation of Vrndavana. He describes Vrndavana as the inner side (antar-mandala) of Goloka, and Goloka as the outer side (bahir-mandala) of Vrndavana. But they are not the outer and inner side of each other in the physical sense, for it is possible to see Goloka in Vrndavana (because Goloka is the majestic manifestation of Vrndavana) but not possible to see Vrndavana in Goloka (Krsna-sandarbha, 116). According to Rupa and Jiva, (Bhakti-rasamrta-sindhu, Tika 1.4), Goloka can be attained by vaidhi (ritualistic) bhakti, but Vrndavana can be attained only by raganuga bhakti, or bhakti flowing spontaneously like a current, disregarding the rules and regulations of ritualistic bhakti. This is a further indication of the difference between the two abodes.

Sanatana seems to differ from Rupa and Jiva in regard to both the relation between Goloka and Vrndavana and the means of their realization. According to him, Goloka (or rather the part of Goloka called Gokula) and the phenomenal Gokula or Vrndavana are identical.9 In his Brhad-bhagavatamrta, Gopa Kumara sometimes stays in Goloka and sometimes in Vrndavana, without being able to make out any difference between them.10 According to him, both abodes can be attained only by spontaneous devotion and not by any other means.11

The difference between the two points of view, however, will seem negligible if we take into consideration the following points:

Thus we may conclude that there is essentially no difference between Goloka and Gokula (Vrndavana). Goloka is a particular manifestation of Vrndavana in which sweetness predominates, but not to the extent to which it predominates in Vrndavana. It is therefore called the majestic manifestation of Vrndavana. Vrndavana is attained by spontaneous devotion, whereas Goloka is attained by ritualistic devotion. The greater the dominance of spontaneity, the fuller the realization of Goloka’s sweetness.16 But when spontaneous devotion is pure, Goloka is realized in its highest aspect which displays sweetness fully and is called the inner side (antar-mandala) of Goloka. In this aspect Goloka is identical with the phenomenal Vrndavana, and the sweetness displayed here is the same as that in the phenomenal Vrndavana, except for the difference caused by Sri Krsna’s always being present in Goloka as a young boy of tender age (nitya-kisora), although in the phenomenal Vrndavana He takes birth and gradually attains boyhood.

The veracity of the claim that the phenomenal Vrndavana, which looks like any other part of the material world to our material eyes, is itself the spiritual Vrndavana, the highest abode, surpassing even Goloka in its excellence, may be questioned. But Sri Caitanya and His followers are ever so emphatic in their statements about its transcendental character. Sri Rupa Gosvami says that devotees who have ardent love for Krsna are even today blessed with a vision of His divine pastimes in this very Vrndavana. Sanatana Gosvami says that Vrndavana is here on earth and Krsna’s unmanifest pastimes are going on in it even now, but none except those to whom He and His devotees are kind can see it. Prabodhananda Sarasvati describes how he actually sees this Vrndavana in its real form with all its transcendent beauty and excellence:

“Oh, this Vrndavana of mine, stationed above every other abode! How it shines near me like a big moon in all its resplendent beauty!” (Vrndavana-mahimamrta, 4.83)

3 Responses to Vrndavana, the highest paradise