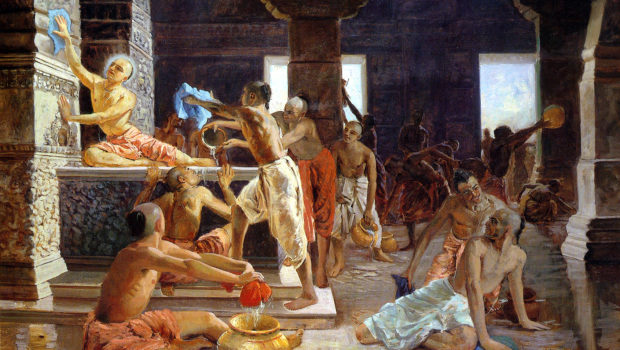 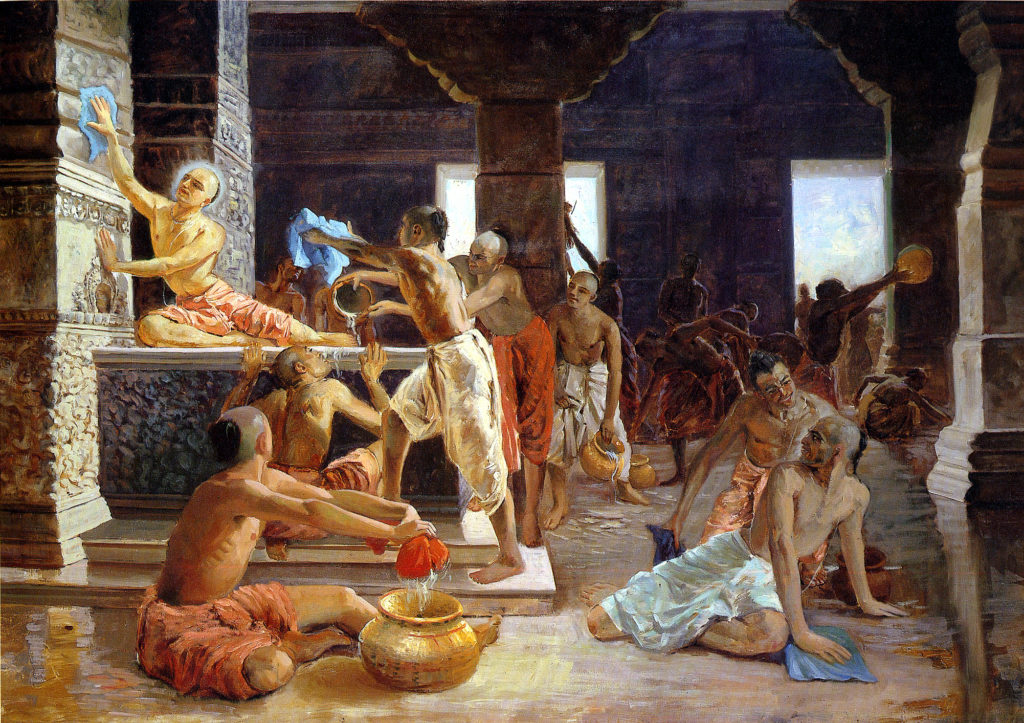 As the Ratha Yatra approached, Sri Caitanya Mahaprabhu set out to thoroughly clean the Gundica temple in preparation for Jagannatha’s arrival. In so doing, he instructed the sadhakas as to the necessity of our own internal cleansing—the cleansing of the heart—that must take place before the Lord will take his seat there. Just as Mahaprabhu is himself Jagannatha but nonetheless took the position of cleaning the temple, similarly it is said that when one begins to chant Krishna nama, Krishna goes into their heart and takes the role of the sweeper, removing the dirt that prevents him from residing there at all times. Thus we find in Mahaprabhu a peculiar form of the Absolute: God in the mood of his own devotee.

Caitanya Mahaprabhu’s associates were somewhat bewildered by his desire to clean his own temple but they concluded, mandira-marjana, ei eka lila kara, ye tomara mana: “Nonetheless, if you wish to do so, it is to be accepted as one of your pastimes.” We should come to the same conclusion in regard to our internal transformation. Krishna, in the form of our guru, is asking us to clean up our act and actively stepping into our lives to help us do so. We may have trouble understanding why or how this is so, but we should endeavor to serve the wishes of guru and Krishna nonetheless, and take comfort in their involvement in the process.

Having arranged for hundreds of pots and brooms, Mahaprabhu went to the Gundica temple with his associates early in the morning and, giving each devotee a broom, engaged them all in an extensive cleansing of the entire temple. Mahaprabhu himself worked tirelessly, collecting dirt and straw in his cloth and then tossing it outside. As the cleaning continued, Mahaprabhu told all of the devotees to combine the dirt they were collecting into one pile, and although they all combined the dirt they had removed, Mahaprabhu’s personal pile was larger. It is with such enthusiasm that Mahaprabhu and Krishna nama endeavor to make our heart a suitable residence for our istha-devata. Alone, we cannot accomplish the task, but taking shelter of Sri Caitanya we can advance toward our goal. With such focus and determination Mahaprabhu and his associates cleaned everything—the floor, the walls, the ceiling, and even the altar itself—inside and out, he cleaned the entire temple, not once, but twice.

In our lives, we may undergo an initial cleansing but some unwanted things may also come back. Some residue may remain. Therefore we have to be vigilant and comprehensive in our spiritual practice. This means we must be attentive to bhajana-kriya and anartha nivrtti. Bhajana-kriya means to follow the practices given by our guru-parampara, and by doing so, anarthas, or false values, begin to come out of our heart. But our endeavor must be sincere in order for true cleansing to take place; we cannot just sweep it under the rug and say that we will tend to it later. We need to take the rug out and shake it in order to get it fully clean. This is where spiritual life truly begins. We can talk about many other things that are charming and beautiful, but to realize them we will have to pass through the difficult stage of cleaning the heart.

When we begin to remove our anarthas we may start to think, “Maybe I ought to put this off till later; it’s really dirty; I’ll wait.” This is a strong tendency, but we have to persevere. And eventually, when the heart is thoroughly cleaned and kept clean, the Lord will take his seat there permanently. Then our practice will develop into something with taste, attachment, and feeling for Krishna, in a particular way. Our Krishna consciousness will become perfect. This is the progression outlined in the Siksastakam in the very first paragraph, and it begins with ceto darpana marjanam, the cleansing of the heart.

Currently we have cluttered the heart with so many material desires by association with matter, and our possibilities have become so limited. We have become like matter. What are our possibilities in the realm of matter, and what are they in the realm of consciousness? The possibilities of consciousness are unlimited in comparison to matter, and a clean heart gives rise to these unlimited possibilities, just as water has many possibilities in comparison to ice. But presently our hearts are like ice; cold and frozen due to association with matter, our potential limited. If we enter the land of Caitanya Mahaprabhu, the land of Radha-Govinda, all possibilities arise. As Srila Prabhupada used to say, quoting Napoleon, “Impossible is a word in the fool’s dictionary.” This is what we are after.

In Gaudiya Vaishnavism, we, tiny jiva souls, are trying to become more than God. That is the reality of Vrindavana, where the devotees are worshipable by their object of worship, and he is controlled by the force of their love. This is impossible, yet this is the idea of Krishna lila. The Godhead, who is the inconceivably powerful Absolute, is simultaneously relative. Absolute and relative at the same time, Krishna is fully human and fully god; fully accessible and weakened by affection, yet fully powerful. Love is a weakness. If you fall in love you’re in trouble. To make Godhead weak in the knees is a big idea, but it starts with clearing a little room in our hearts, and Mahaprabhu himself has shown us this by his example of cleansing Gundica with his own hands.