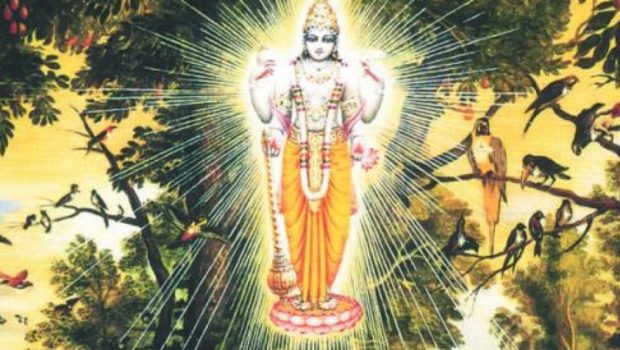 On the Lotus of the Heart

Q& A with Swami B. V. Tripurari

Q. How did Krishna come into existence?

A. Brahman (God) has no cause. Why must it have one? We know that the universe has a cause, but this does not mandate that its cause must have a cause. The scriptures say that the world comes from Brahman and that Sri Krishna is Para Brahman—the Supreme Brahman. The scriptures also say that Krishna is sarva karana karanam–the cause of all causes, which makes Krishna the final word on causality.

From another perspective, existence is the result of movement. In Vaishnavism, movement is equated with shakti (divine energy). Without Radha, the supreme shakti, there is no Krishna. Therefore it has been said that Radha’s love brought Krishna to life; her love made Brahman dance. That love knows no reason, has no cause, is without beginning, and has no law that governs it.

You ask how Krishna came into existence. Better to try to love him for by doing so you will become fulfilled and thus relieved of the burden of trying to find a reason for everything. Reason leaves off where love begins.

Q. Could you tell me something about Sankhya philosophy; a philosophy said by some to be atheistic and by others to be theistic?

A. The word sankhya means to count, to calculate, or discriminate. The Sankhya darsana or philosophy/doctrine is perhaps the oldest of the six principal darsanas of ancient India. The other schools of thought, of which Vedanta darsana and Yoga darsana are prominent today, adopted Sankhya’s basic analysis of nature and her constituents. India’s Buddhism also embraced Sankhya’s analysis of nature.

Sankhya as a stand-alone philosophy, unlike Vedanta and Yoga, does not acknowledge isvara (God). Thus it is sometimes referred to as being atheistic, but its atheism posits an ontological distinction between purusa (consciousness) and prakriti (matter), and Sankhya teaches how consciousness can be liberated from its identification with matter. Furthermore, its doctrine is derived in part from revelation such as the Upanisads, so it is not atheistic as we think of atheism today.

It is questionable how much essential Vedanta is dependent on the detailed Sankhya explanation of nature. While Vedanta must embrace its distinction between consciousness (the observer/subjective reality) and matter (the observed/objective reality), other details of Sankhya’s analysis of nature’s constituents are lacking in comparison to that of modern science.

Q. In your commentary on Bhagavad-gita (8.26) you write that jnana-yogis, who know Brahman, take the path of light and attain Brahman and do not return. However, Srila Prabhupada has said that impersonalists who attain Brahman by merging with the Supreme will sooner or later long for love and again return to this material world. How can we harmonize these positions?

A. This is the verse Srila Prabhupada often cites regarding falling from Brahman:

O lotus-eyed Lord! Those who proudly think that they are liberated but do not render devotional service unto you certainly have impure intelligence. Although they perform severe austerities and penance and rise up to a high spiritual position, they fall down again because they have no respect for devotional service to your lotus feet.1

This verse speaks of those who think they are liberated and do not render devotional service. Their attainment–“a high spiritual position”– does not speak explicitly of sayujya-mukti, or impersonal Brahman realization. But even if we take it to be speaking about Brahman realization, its point is that without bhakti there is no possibility of attaining complete liberation in any of its five forms.

Krsnadasa Kaviraja explains this Bhagavatam verse to be referring to jnanis who have no regard for bhakti but have attained jivan mukti, liberation while still within the body. He says they fall down. This means they never attain complete mukti, videha mukti. They fall from an incomplete form of mukti in which their prarabdha karma is still operative.

So the idea is that so-called liberation attained without bhakti is a fallible position. There are, however, others who engage in bhakti mixed with jnana. They attain their desired form of mukti—Brahman realization—from which there is no return.

Q. Your Sanga, “God Plays,” contains a discussion about Paramatma, the all-pervading Supersoul said to reside in the heart of every living being. My question is how literally should we take the idea of Paramatma in the heart? Is there actually an infinitesimal form of Narayana sitting there within everyone’s heart? Does this idea apply to the jiva (individual soul) merged in Brahman after attaining sayujiya-mukti?

A. The idea that the Paramatma (Ksirodaksayi Vishnu) is actually sitting in the small space of the heart of every jiva need not be taken literally. Neither does the jivatma literally have a heart. Of course, Paramatma (God) is always with us as he is all-pervasive in knowledge and thus present within everyone in terms of awareness of all their thoughts and deeds. Baladeva Vidyabhusana comments in his Govinda Bhasya that the contradictory statements about God being all-pervasive/infinite and localized/infinitesimal in the heart of the jiva are to be harmonized by the idea that the localized/infinitesimal sense of the all-pervading Paramatma is spoken of merely for the sake of conceptualization in sadhana or meditation. When one meditates on God being the soul of one’s own soul or the knower of one’s own heart and witness of all one does, one is encouraged to conceive of him as four-armed, the size of one’s thumb, residing on the lotus of one’s heart, and so on.

Sri Baladeva Vidyabhusana also writes that aside from this figurative sense in which the Godhead is within the heart of the jiva, out of affection God may appear to his devotees in different forms as their ista-deva, such as Rama or Krishna, within their hearts. Sri Brahma-samhita mentions that God is literally experienced in his devotees’ hearts on the basis of their mutual love for one another and by the power of God’s inconceivable potency, premanjana churita bhakti vilocanena santa sadiava hrdayesu vilokayanti yam saymasundaram actintya gunua svarupam. As this verse says, seeing Krishna-Syamasundara within the heart requires eyes anointed with divine love (prema), for wherever there is prema, God is present. The two are one and different at the same time.

With regard to jivas that have attained sayujya mukti, or Brahman realization, God is present in their hearts in terms of his being fully aware of their liberated status in Brahman, a status they cannot attain without his grace. Note that according to Gaudiya siddhanta, the jiva is eternally an individual atomic particle of consciousness even when apparently merged in Brahman. Indeed, in rare cases owing to the mercy of the Godhead, it is said that such souls can leave their Brahman realized status and attain a place in God’s lila. They can be blessed, that is, with bhakti. Thus in sayujya mukti they are not off the radar of the Supreme Soul, Paramatma, who knows their hearts. Indeed, Sukadeva Goswami was absorbed in Brahman and yet by God’s grace he was drawn to the post-liberated status of bhakti. As Sri Krishna says in Bhagavad-gita about those in brahma-bhuta (transcendence), mad bhaktim labhate param–they attain pure devotional service to me.