Reasoning and the Crooked Flow of Lila 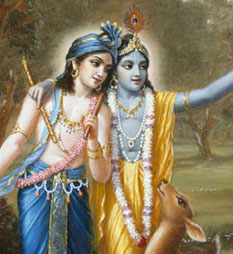 God works wonders. God’s ways are filled with miracles. We, should be prepared for that. We should be prepared that all the knowledge of this world, all our experience, will prove to be wrong. So it is said, jnane prayasam udapasya namanta eva: Be clear of your past experiences, what you have drawn from the world of the senses, empiric knowledge (pratyaksa-jnana). Your tendency will always be to try to push your way into the transcendental world on the strength of mundane knowledge. But this verse is saying, “You fallen people, your capital is the experience of this world, of the senses. But it won’t do, it won’t have any value in that higher plane. What is found there is a new thing, so approach that world with an open mind; understand that everything is possible with the infinite. All your expectations, your past experience, has no value. Why don’t you give up trying to dodge this point?”

The transcendental world is something quite new to us. It is very difficult to get out of this superstition of so-called “truth” here. But still it is necessary that we accept that anything and everything is possible with God. He is the master of impossibilities. Possibility and impossibility are found only in our dictionary, yet even Napoleon wanted to remove the word “impossible.” He said, “‘Impossible’ is a word in a fool’s dictionary.”

How are we to understand that the original guru of our sampradaya becomes bewildered?1 It is “impossible.” We must suspend our “knowledge” (jnane prayasam udapasya namanta eva). We may take it that Krishna is playing hide and seek, perhaps, with Brahma, our gurudeva. It is like a game of hide and seek. Sometimes Krishna is defeating others and sometimes he is defeated.

When Krishna and Balarama are playing with their friends in the jungle, they generally play in two groups. Krishna is in one group and Balarama is in another. Krishna is considered to be less strong than Balarama. Balarama was the strongest person there, and the next strongest was Sridama, so Sridama used to play on the side of Krishna. Whenever Balarama was defeated, he would become enraged. Krishna would diplomatically help his own team, and when Balarama saw that his own team was disloyal due to Krishna’s tricks, he would turn to his younger brother Krishna and say, “I shall punish you!” But Krishna would say, “No, you cannot punish me; Mother Yasoda has entrusted me in your care. You can’t mistreat me.”

One day, Balarama slapped Krishna, but Krishna went to Mother Yasoda and told on him. Balarama was very disturbed and said, “I slap you once, and you complain to your mother that I do not love you? Krishna, how could you do this?” At last Krishna was perplexed and accepted his defeat.

So Krishna lila moves in a crooked way (aher iva gatih premna…). This fundamental point, the foundation of our understanding about Krishna lila has been given by Rupa Goswami in this verse. He says, “Don’t be eager to find reason everywhere in the pastimes of divinity. They are naturally crooked. In Krishna lila we shall find that although no party is defective, still, one will find fault with another and begin a quarrel. No defect can be found there. But still, for the necessity of lila, false defects are found, and some quarrel begins. This is the meaning of lila, pastimes: what we find here by necessity, flows there automatically. We can’t try to apply our reason or our standard of measurement to the movements of the infinite. And whatever gain we have made by connecting with that flow of lila will be lost in our attempts to measure it; that will be the only consequence of our analysis. So we should try to have a taste of lila with a submissive attitude. Sometimes reason, logic, and analysis are necessary, but only to preach to the people in general. Only for the purpose of preaching to people addicted to reason do we have to take the help of reason. But when devotion becomes automatic, anuraga, then both reason and scripture are left in the subterranean position. There is no place for scriptural arguments there. To a certain extent, reason is necessary for our development up to vaidhi-bhakti, the elementary stages of devotion. But above that, it has no use.

5 Responses to Reasoning and the Crooked Flow of Lila