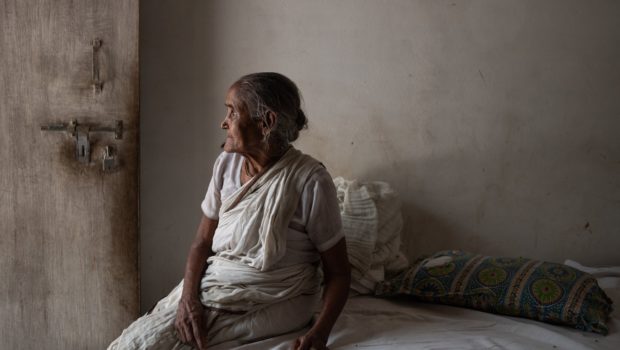 By Kai Schultz, originally published at the New York Times.

Many of India’s castaway widows — most of them illiterate, some married off as infants — have seen significant improvements in their quality of life over the last few years. Prodded by a flurry of public petitions and court rulings, the government and rights groups have invested tens of millions of dollars into lifting the conditions of abandoned women.

The money has gone not only into building group homes for widows, but also to funding pensions and providing work training and medical treatment.

While some of these changes are taking place across India, they are most visible in Vrindavan.

The town is a maze of narrow streets and regal, sandstone temples. All day long, thousands of pilgrims gather to pray at the base of giant statues of deities.

It is believed that widows have gathered in the city since Chaitanya Mahaprabhu, a 16th-century Bengali social reformer, brought a group of them there to escape from suttee, a now-banned practice in which Hindu widows immolated themselves on their husbands’ funeral pyres.

For many years, the widows in Vrindavan, which is considered the childhood home of the Hindu god Krishna, have survived by singing devotional songs in temples for a few rupees a day, and by begging for money in white saris, a signifier that color had drained from their lives.

Homelessness was common among Vrindavan’s widows. Some lived in doorways. When they died, garbage collectors would sometimes stuff their bodies into jute bags and throw them into the Yamuna River, according to local media reports.

While widows often felt they had no place else to go, the trip to Vrindavan was dreaded. Sushila Bala Dasi, 62, said she sobbed so loudly on the train ride to the town that passengers called the police.

The widows’ conditions became so dire that India’s Supreme Court took notice of their plight in 2012, ruling that the government must provide them food, medical care and a sanitary place to live.

Since then, a number of government projects have been introduced, including building Krishna Kutir, or Krishna’s House, which cost $8 million and opened last August. Many of the 129 widows living there arrived alone, by train, from villages hundreds of miles away, with dirty, torn clothing, and some came with serious injuries.

At the ashram’s inauguration, Maneka Gandhi, India’s minister for women at the time, said there was still far to go in improving widows’ treatment, but that she hoped Krishna Kutir’s model could be replicated elsewhere in India. “We want all women to feel safe,” she said.

Vinita Verma, a social worker from Sulabh International, an organization that works with widows, said she had seen a slow erosion of the conditioning that taught the women — who number at least 3,000 in Vrindavan — to view themselves as unworthy of love.

Widows who once refused to wear color are opting for garments dyed blue, burnt orange and pink.

This article was originally published at the New York Times and is partially reproduced here without the permission of the author, who is not affiliated with this website or its views.