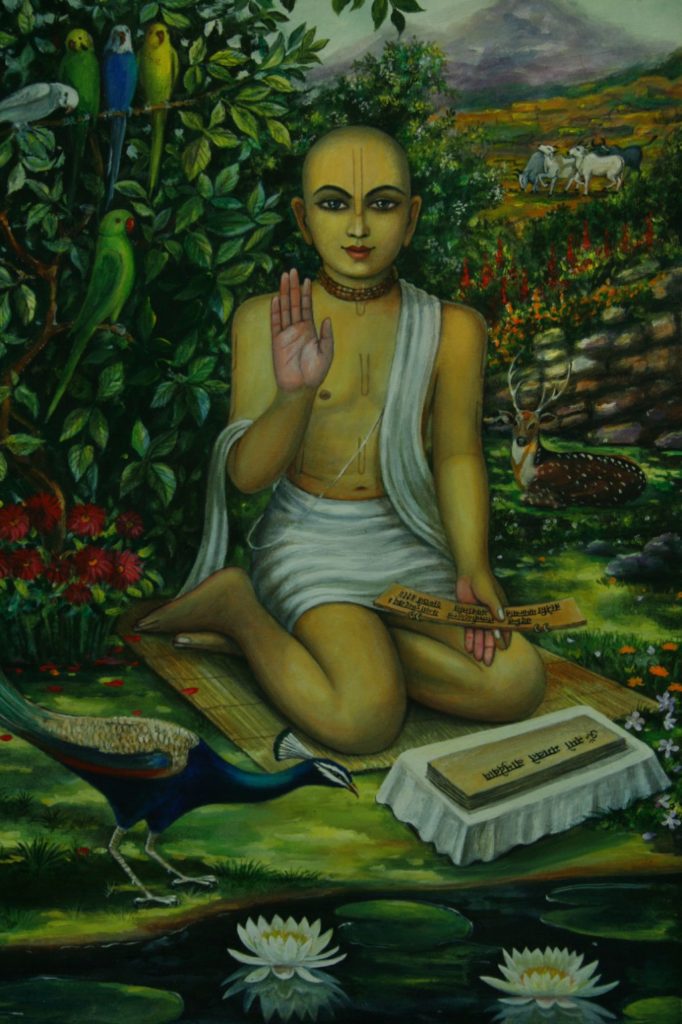 Once, a champion scholar, while travelling with the aim of conquering all the directions, came to Sri Rupa and Sri Sanatana in Vrndavan. Although Sri Rupa and Sri Sanatana were powerfully learned and brilliant, they did not enter into debate with the scholar and instead, out of natural humility, signed letters admitting defeat. Later, this scholar heard that one of their students, like persons who are averse to the soul, was a great scholar of all the philosophical scriptures, and that if one cannot defeat him, then one has not defeated anyone of importance. The scholar then came to discuss the scriptures with Srila Jiva Goswami and said, “I have heard that your learning is widely renowned. So, please discuss the scriptures with me or, like your gurus, sign a letter admitting defeat.”

Their discussion of the scriptures began. Within a short time, the scholar’s illusion was cut away. He was defeated and desired to rectify his mistake. Sri Jiva Prabhu then said, “If I had not defeated you and glorified them, you would not have understood them. So, I have had to proceed this far. Now, if you want genuine good for yourself, quickly go to them and pray for forgiveness. Being unable to understand their liberality and greatness, you have severely disrespected them.”

What was Srila Jiva Prabhu’s conception? To illustrate it, we can explain as follows. A group of dacoits approached a house. When the dacoits wanted the key to the house from the proprietor, the proprietor immediately came out and gave it to them, but when they went to the treasury, they saw that there was a guard. The dacoits said, “Open the door. Look here. The proprietor has given us the key. We will now enter the treasury.”

The guard said, “Where is the key? Let me see.” The dacoits gave him the key. The guard took the key and said, “First, defeat me. Then, enter the treasury.” Thereafter, in an intense fight, the guard defeated them all and protected his master’s honour and wealth.

Everywhere, we see in a similar way the greatness of Srila Jiva Goswami’s service to the sampradaya, and in the conduct of Srila Prabhupada, we have seen the same sort of endeavour to serve the sampradaya and his gurus. By discussing the philosophies of nyaya, sankhya, Patañjali, and so on, Sri Jiva Prabhu endeavoured to make the world appreciate the wondrous nature of devotion to the Lord. As an Englishman should be taught in English and a Chinaman should be taught in Chinese, so he grasped the teachings of these sampradayas and endeavoured to make them understand his desired end. Still today, distinguished scholars become fascinated to see the great outcome of Sri Jiva’s expertise in all the scriptures.

The foremost aspect of Srila Jiva Goswami Prabhu’s pastimes that naturally appears before our eyes is his protection of the proper conception of loving devotion to Sri Krsna, replete with knowledge, realisation, and detachment. He cut asunder the conceptions of those who were proud of their materialistic learning and firmly established the conception of devotion to Sri Krishna through his six sandarbhas. Furthermore, so that students would not go down the wrong path and instead follow the path of pure devotion from the start of their education, and so that they would be engaged in chanting the Names of the Lord at every moment, he wrote Sri Hari-namamrta-vyakarana and started a new era even in the world of grammar. His style and endeavours were like those of a prince. To follow and please his gurus, he would go out and spend his days and nights at the base of a tree, yet the expression that is seen in this world of his tremendous propensity to engage in the service of Sri Sri Radha-Govinda is extremely rare. Through his conduct, the position of being a prideless, respectful, surrendered servant of the Vaisnavas has been established throughout the world in a highly revered form.

He has said, “So that no one makes any offence at the supremely glorious, supramundane feet of my gurus, and so that everyone understands the greatness of my gurus, first of all I have had to raise my head.” Here is the foundation for the mentality of an acarya described in Srimad Bhagavatam. Srila Jiva Goswami was fully adorned with all good qualities: boundless learning, nobility, vigour, and so on. From boyhood onwards, he lived a very long life as a brahmachari. Even if the storehouse of nectarean knowledge whose door he opened and whose contents he distributed all over the world is looted for infinite time, it will always and in ever-new ways continue to gradually increase.