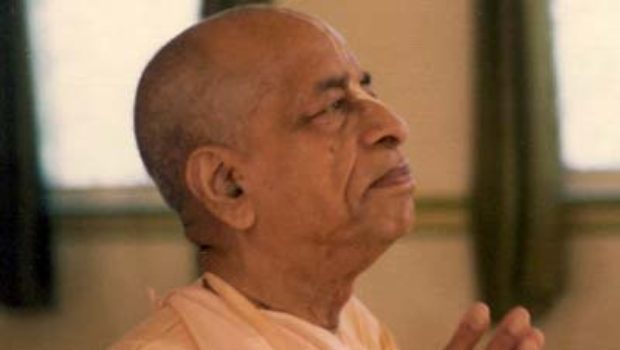 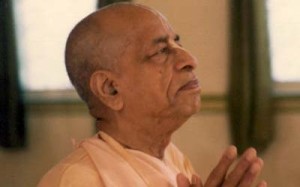 The Lord says in the Bhagavad-gita (4.8), paritranaya sadhunam vinasaya duskritam. So there are two purposes when God incarnates. He has two missions. One mission is paritranaya sadhunam, to deliver the faithful devotees, the sadhus. Sadhu means saintly person. Sadhu means devotee. Sadhu does not mean worldly honesty or dishonesty, morality or immorality. It has nothing to do with material activities. It is simply spiritual. But sometimes we define “sadhu” as a person’s material goodness or morality but actually “sadhu” means on the transcendental platform, gunan samatityaitan (BG. 14.26). Sadhu is transcendental to material qualities. So paritranaya sadhunam, paritranaya means to deliver. Yet if a sadhu is already delivered, he is on the transcendental platform, then where is the necessity to deliver him? This is the question. Therefore this word is used, vidambanam. It is bewildering. It is contradictory. It appears to be contradictory.

Transcendental position means he’s no longer under the control of the three material modes of nature; goodness, passion and ignorance. It is clearly stated in the Bhagavad Gita, sa gunan samatityaitan. The sadhu transcends the material qualities. Then where is the question of deliverance? The sadhu does not require deliverance because he is very anxious to see the Supreme Lord eye to eye as that is his inner desire. Therefore Krsna comes. Not for deliverance but to satisfy him.

Just like a devotee wants to satisfy the Lord in all respects, similarly more than that, the Lord wants to satisfy the devotee. This is the exchange of loving affairs. Just like in your own ordinary dealings. If you love somebody, you want to satisfy him or her. Similarly, she or he also wants to reciprocate. So if that reciprocation is here in this material world, how much it is greatly elevated in the spiritual world? So there is a verse, “sadhu is my heart, and I am also the sadhu’s heart.” The sadhu is always thinking of Krsna and Krsna is always thinking of his devotee.

So the appearance and disappearance of the Lord within this material world is called cikirsitam. Pastimes. It is Krsna’s pastime that he comes. When he comes, he works. The work is to give protection to the sadhu and to kill the asadhu. Yet both activities are his pastimes. He’s not envious. He cannot be envious. The killing of the demons is also his affection. Just like sometimes we punish our children. There is love. So when Krsna kills a demon, the business is not on the platform of material jealousy or enviousness.

Therefore it is mentioned in the sastras that even the demons who were killed by the Lord, received immediate salvation. The result is the same. Just like with Putana, she wanted to kill Krsna, but who can kill Krsna? That is not possible. She was killed. But what was the result? The result was that she got the position of Krsna’s mother. This is explained in the Srimad Bhagavatam, Uddhava explained to Vidura that Krsna is so kind that even the person who wanted to kill him with poison, was accepted as His mother. Such a kind God, Krsna is.

Suppose we create friends. We expect some benediction or some profit from the friend and from the enemy we expect some harm. But Krsna is so perfect that nobody can do any harm to him, nor can anyone give anything to him. So where is the necessity of friend and enemy? There is no necessity. Therefore it is stated here: na yasya kascid dayito ‘sti. He doesn’t require anyone’s favor. He’s complete. I may be very poor man. I expect some friend’s favor, somebody’s favor. But that is my expectation because I am not perfect. I am not full. I am deficient in so many ways. So I am always in need. Therefore I want to create some friend, and similarly I hate the enemy. Yet Krsna being the Supreme, no one can harm him and no one can give him anything. So why do we offer Krsna so many comforts? We are dressing Krsna, we are decorating Krsna, and we are giving nice food to Krsna.

Try to understand this fact; Krsna does not require your nice dress or nice flower or nice food. Krsna does not require. But if you give him, then you become benefited. It is Krsna’s favor that he’s accepting. The example is given that just like when you decorate an actual person, the reflection of that person in the mirror also appears decorated. So we are reflections. In the Bible it is said that man is made in the image of God. So Krsna has got two hands, two legs, and one head. So man is made after God means we are reflections of the image of God. Not that we manufacture or imagine some form according to our form. That is a mistaken idea.

11 Responses to Try to Satisfy Krsna