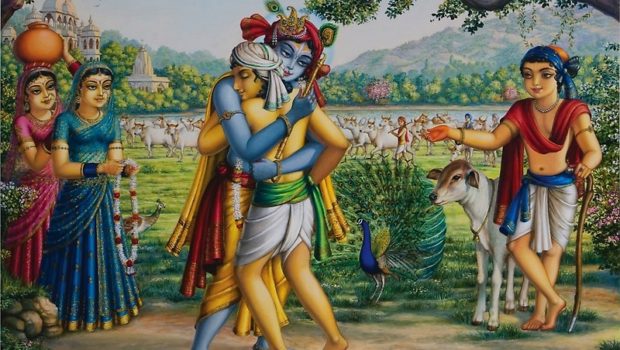 Beyond Atmarama (Part 1): The Highest Reach of Divine Dissatisfaction

When the famous Diogenes was asked who was the most fulfilled person on Earth, he immediately replied with the most obvious answer of the time: God. Then, when the inquirer requested another possible answer that might not include divinity, Diogenes said, “that person who is closest to God.” Many of us may be fully satisfied with this line of thought, where the Absolute is depicted as atmarama or self-satisfied, but how true is this really? Is God actually and absolutely satisfied? And if so, how does such contentment play itself out in his daily dynamics?

When we arrive at the general perspective of revelation (whatever the tradition, including Hindu), one of the foremost attributes of the Godhead that will naturally manifest is his completeness. This is expressed in classic Upanisadic statements such as om purnah adah purnam idam, which implies that God is not only fully complete, but everything that emanates from him is also such. Nothing exists outside of God; he is the only non-dual absolute reality to be known. At the same time, according to Sriman Mahaprabhu, the words of the Upanisads resound very far from where hari-katha can take us. So, even if the abstract and metaphysical Vedic canon embodied in the Upanisads says that God is complete, we may arguably consider that texts such as the Bhagavata (which lie far above the ordinary Vedic reach) may tell us a different story. And they indeed do.

If we are brave enough to immerse ourselves in the pages of Srimad Bhagavatam, we will gradually discover a pretty disconcerting theological prospect, which, properly understood, will bloom into the greatest charm imaginable: the Vraja Krishna conception. This approach to the divine will no doubt include the highest degree of majesty (which makes up the entire idea of God for many of us), but it will also include an almost unthinkable feature: in Vraja, at home, the godhood of Bhagavan becomes buried under layers and layers of intimacy. The Para Brahman becomes a plaything in the hands of his devotees, a puppet in the context of what we may call svarupa-saktyananda.

This unique type of rapture is presented by our tattva-acarya, Srila Jiva
Gosvamipada, in his Priti Sandarbha (Annucheda 63). There, Sri Jiva declares that Bhagavan mainly tastes four varieties of ananda, known as svarupananda, manasananda, aisvaryananda and svarupa-saktyananda. These refer respectively to the bliss Bhagavan derives from his own being, mind, and opulence, and, last but not least, the joy that he derives from the love of his devotees. This last form of ananda, svarupa-saktyananda, considered by Sri Jiva the best of all (and which actually includes manasananda and aisvaryananda in itself as further subdivisions), speaks about God relishing his own existence through the existence of those he lives for, and vice versa. For a clearer depiction of this complex theological reality, Jiva refers to the well-known analogy of the flute: a flute player may whistle and thus create a particular sound with air, but if he pours that same air into the holes of his flute, his former whistling takes another shape, a much more pleasing vibration. Similarly, Bhagavan may experience his own inherent bliss in the form of svarupananda, but when that same ananda (the air) chooses to express itself in relation to his own svarupa-sakti (the flute), the air will sound much nicer—and it indeed does, both figuratively and literally.

In this way, the svarupa-sakti has a flavor of its own when residing inside Krishna. It is extremely relishable in itself, but when that flavor expresses itself by implanting itself into the heart of Krishna´s devotees, it becomes enrichened, thickened, and sweetened. To put it in contemporary scientific terms, we could say that both mass and energy are one and different at the same time when present in an object: they are equal and balanced when the object is not in motion; however, when the object is in motion, its energy exceeds its mass. Similarly, saktiman and sakti are one and different: in saktiman as Brahman, Brahman’s sakti and Brahman are balanced and there is no movement; however, saktiman as Bhagavan is in motion, and his sakti—his energy—is greater. Indeed, his sakti causes him to move, even to dance! In this way, Krishna’s svarupa-saktyananda gives God a greater sense of joy than his own svarupananda.

Let’s share two important stanzas from the Bhagavata that specifically speak about this most sacred principle:

O best of the brahmanas, without saintly persons for whom I am the only destination, I do not desire to enjoy my transcendental bliss and my supreme opulences.

My dear Uddhava, neither Lord Brahma, Lord Siva, Lord Sankarsana, the goddess of fortune, nor indeed my own self are as dear to me as you are.

In service of both pleasure and affection, here Sri Krishna finds himself mainly attracted to his devotees, in relation to whom he experiences bliss far beyond the joy he can know when he lacks a vivid connection with them. Commenting on the first of these two verses, Sri Visvanatha Cakravartipada paraphrases Bhagavan in the following words: “I am called atmarama because I enjoy, but I do not desire that enjoyment without my devotees. More than my own bliss from my svarupa, I desire the bliss of the svarupa of my devotees. Both of us have spiritual forms, but the mature form of the spiritual function called ‘mercy’ exists in the bhakti within the devotee, since it is the essence of the cit-sakti, and it gives bliss even to my svarupa, and attracts my svarupa.”

In other words, what we have here is God resorting to “someone else” in his attempt to feel more complete. This is quite clear from the very beginning of the creation cycles, where God is depicted as “being one, but desiring to become many out of joy.” Although these kinds of statements may generally apply to Maha-Visnu and his sristi-lila, in a deeper sense they speak to us about “the One becoming Two” for the exclusive purpose of loving exchange: saktiman and sakti, God and Goddess, Bhagavan and Bhagavati—eko bahu syam. In other words, God (along with his energies) is the only thing that truly exists; however, the very nature of his existence is such that it tends towards fulfillment in relation to his sakti (most specifically his svarupa-sakti) in an ongoing way, giving birth to the prospect of rasa. So we could say that on the basis of tattva-vicara (philosophical consideration) God is already complete; however, at the same time he has the potential to become even more complete in the context of rasa-vicara (his relishing the utmost limit of his own self.) Therefore, there must be a certain agency which facilitates such an ambitious project. We may plainly call that agency “divine love,” which by its very nature presents a free celebratory movement, the dynamic expression of which is known as lila. Thus, by proper exchange with his devotees, Bhagavan can finally experience his desired level of satisfaction. But, will he actually do so?

While divine love arguably bestows unlimited fulfillment, it also bestows a second and unique experience: unlimited dissatisfaction. Although the latter seems to be the exact nemesis of the former, properly understood dissatisfaction represents the highest reach and expression of fulfillment. Divine love embodies a whole realm of paradoxes, such as the one presented herein, and the goal of life (even of God’s life!) is to solve those paradoxes one after another. So how might we solve this particular riddle? In his Brihad-bhagavatamrita, Srila Sanatana Gosvami gives us an important hint:

It is especially noteworthy that the crest jewel of clever heroes, Sri Krishna, can forego his atmaramata (self-satisfaction) and all his other qualities, but he cannot give up his quality of coming under the control of his beloved devotees; he accepts their control graciously. This alone is the ultimate limit of his godhood (bhagavatta).

In the purport to his own verse, Sri Sanatana explains that, “As much as God manifests bhakta-vatsalya (affection towards his devotees) the more he becomes Krishna, the Supreme Personality of Godhead. This implies he will “give up” all of his other qualities (including his omnipotence and self-satisfaction) in order to retain his identity as bhakta-vatsalya, an attribute he especially honors and keeps close to his heart.” In other words, we could say that Sri Krishna is nothing more than a byproduct of the affection of his devotees, which he fully embraces and duly honors with all its implied consequences.

In a different section of his work, Sri Gosvamipada further expresses this same principle from a different vantage point. He declares that, “The name of Bhagavan is dearer to him than his own divine form, the former being saturated with rasa.” The idea here is that since each of Krishna’s primary names actually embodies a particular type of love of God, they thus represent different devotees who are possessed by such love. For example, Radha and Yasoda respectively address their visaya-alambana as Radhanatha and Yasodanandana. Thus, Sri Nama represents a more precious gem to Krishna than Nami himself. That’s why we will never find statements like, “A devotee is dearer to Bhagavan than his own Holy Name,” because both actually represent that same agency of svarupa-saktyananda. So although Hari and his name are identical (‘bhinatvam nama-namino) on a general level, in a more specific way Nama is even higher than Nami in the same way that a bhakta is considered “higher” than Bhagavan (from Bhagavan’s own perspective). In that sense, we can establish the predominance of Nama above Nami, bhakti above Bhagavan, svarupa-saktyananda above svarupananda.

And needless to say, he (Atmarama Sri Krishna) is eternally bound to reciprocate in the context of divine dissatisfaction. But that’s a whole different story. To be continued…

3 Responses to Beyond Atmarama (Part 1): The Highest Reach of Divine Dissatisfaction